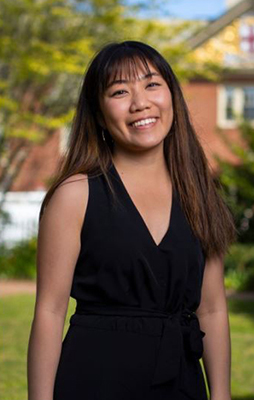 A sense of identity, and a sense of community

Michelle Liu has a love for writing, a pursuit through which she found purpose and passion during her years at Brown. In her senior oration on Commencement day, she plans to emphasize to her peers the importance of assessing the purpose of their lives. The New Jersey native will also acknowledge her family because of the importance she places on her upbringing, she said.

“I was super excited and incredibly honored and grateful to have the chance to speak to so many people, not only students, but also parents and mentors who’ve helped us along the way,” Liu said.

New Jersey native Michelle Liu plans to honor the importance of family and encourage her Class of 2022 peers to assess the purpose of their lives.

A statistics and sociology concentrator, Liu served as president of sociology’s Departmental Undergraduate Group. Inspired by her own experiences and a course titled Race, Class and Ethnicity in the Modern World, she worked on a collaborative student/faculty research project, analyzing data from more than 504,000 census participants to extract insights about the Asian American population among subgroups, between genders, and among other races to study racialization in United States.

She also co-founded Red Envelope Stories, a newsletter in which subscribers share stories on ethnicity and identity, with a particular focus on grappling with the modern Asian diasporic identity. Liu told the Boston Globe in an article on the project that she is working to foster pride in her identity as an Asian American: “The stories are not just what people think of as ‘traditional Asian American stories,’ but also the intersectionality of Asian people in America, as well as other parts of the world,” she told the newspaper.

Liu wrote essays and stories and contributed content to the Boston Globe, Business Insider, the Public’s Radio and a range of other news organizations during her time on campus, seeking to understand and improve social inequalities within minority communities through data, writing and advocacy. She was a reporter for her county newspaper and a social innovation fellow at the Swearer Center. She served also as associate data director for the Brown Political Review, a team lead at 180 Degrees Consulting and an editor at the Brown Daily Herald’s Post-Magazine.

Reflecting on her classroom experience, Liu noted the impact of the Open Curriculum as well as the support of the students, faculty and staff she met across campus. Brown’s signature approach to undergraduate education allowed her to explore “a wide range of interests from writing to mathematical modeling,” she said.

“Something key about my Brown experience was the community,” she said. “Without my professors and friends, I can't imagine receiving the opportunities I've been given. Through them, I was exposed to different interests and worldviews and able to decide for myself what was right for me.”

After Commencement, she will work at McKinsey & Company in New York as a management consultant.

“I found so many opportunities to do what I wanted to do at Brown, while really developing a lifelong passion for writing,” she said. “I’m leaving Brown with a really strong sense of identity and what I want to do with my life.”