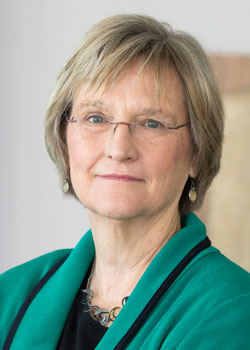 Drew Gilpin Faust is the 28th President of Harvard University and the Lincoln Professor of History in Harvard’s Faculty of Arts and Sciences.

As president of Harvard, Faust has expanded financial aid to improve access to Harvard College for students of all economic backgrounds and advocated for increased federal funding for scientific research. She has broadened the University’s international reach, raised the profile of the arts on campus, embraced sustainability, launched edX, the online learning partnership with MIT, and promoted collaboration across academic disciplines and administrative units as she guided the University through a period of significant financial challenges.

She is the author of six books, including This Republic of Suffering:  Death and the American Civil War (2008), for which she won the 2009 Bancroft Prize, the New-York Historical Society’s 2009 American History Book Prize, and which was recognized by The New York Times as one of the “Ten Best Books of 2008.”  It is the basis for a 2012 Emmy-nominated episode of the PBS American Experience documentaries titled “Death and the Civil War,” directed by Ric Burns.