We Eat Socca Here (Scott Petersen, 9 min); 2019 opening night only at kick off party: free entry
The hidden story of a savory local specialty found only on the French Riviera and the surrounding areas. Socca enjoys a historical and cultural significance that far outweighs its simple and rustic four ingredients.

By the Grace of God (Grâce à Dieu, François Ozon); 2019
Alexandre lives in Lyon with his wife and their children. One day, he discovers that the priest Bernard Preynat, who sexually assaulted him during scout camps when he was a child, is still in contact with children. He starts a fight for justice, along with two other victims François and Emmanuel, by trying to collect as many testimonies as possible. But it will also lead them to question their life, their relationships, their faith and to confront their families. This tell-all is based on the victims’ true stories.


Happy Birthday (Fete de Famille, Cédric Kahn); 2019
“Today is my birthday and I would like us to talk only about happy things.” Matriarch Andrea (Catherine Deneuve) does not yet know that the “surprise” arrival of her eldest daughter, Claire, missing for 3 years and determined to take back what is due to her, will upset the program and trigger a family storm during Andrea’s 70th birthday celebration. The stand-out ensemble cast breathes life into this family portrait of a dysfunctional, somewhat codependent clan, compelling viewers to draw comparisons to their own family sagas.


It Must Be Heaven (Elia Sulemain); 2019
ES escapes from Palestine seeking an alternative homeland, only to find that Palestine is trailing behind him. The promise of a new life turns into a comedy of errors: however far he travels, from Paris to New York, something always reminds him of home. From award-winning director Elia Suleiman, a comic saga exploring identity, nationality and belonging, in which Suleiman asks the fundamental question: where is the place we can truly call home? 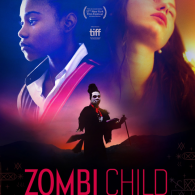 Zombi Child (Bertrand Bonello); 2019
Haiti, 1962: A man is brought back from the dead only to be sent to the living hell of the sugarcane fields. In Paris, 55 years later, at the prestigious Légion d’honneur boarding school, a Haitian girl confesses an old family secret to a group of new friends - never imagining that this strange tale will convince a heartbroken classmate to do the unthinkable.

Africa Mia (Richard Minier, Edouard Salier); 2019)
1964. This documentary takes place in the midst of the Cold War, ten young promising musicians from Mali are sent to Cuba to study music and strengthen cultural links between the two socialist regimes. They invented a whole new genre: Afro-Cuban Music and become the iconic group "Las Maravillas de Mali". New Year's Eve 2000. Richard Minier, a French music producer meets a former member of the band in Bamako and decides to bring the band back together.


Marona's Fantastic Tale (L'extraordinaire voyage de Marona, Anca Damian); 2019
In this animated film for adults, Marona is a mixed-breed Labrador who has had multiple masters. Her personality resonates deeply with the humans she encounters. After an accident, she reflects on her experiences in different homes. As Marona journeys into her past, a portrait of unfailing empathy and love emerges in this beautiful and deeply emotional story of an average dog and her extraordinary life.

The Girl with a Bracelet (La fille au bracelet, Stéphane Demoustier); 2019
Lise (Mélissa Guers) is 18 and lives with her parents in an upper-middle class home in Nantes. She’s just passed her baccalaureate. But for the last 2 years she wears a tracking bracelet and is a virtual prisoner in her house – she’s accused of murdering her best friend. The motive for the killing may have been revenge for the friend’s sexual-shaming post on social media. This engrossing courtroom drama, a crisply shot and precisely acted adaptation by director Stéphane Demoustier from an actual front-page case, is a probing psychological profile laced with ambiguity. Did she or didn’t she?

On a Magical Night (Chambre 212, Christophe Honoré); 2019
After 20 years of marriage, Maria (Chiara Mastroianni) decides to leave her marital home. In this comedy-cum-fantasy, she moves into room 212 of the hotel across the street. From there, Maria has a bird's-eye view of her apartment, her husband, her marriage. She wonders if she has made the right decision. Many of the people in her life have an opinion on the matter and they plan to let her know.


L.A. Tea Time (Sophie Marcotte); 2019
Taking her usual place off-camera and on, Sophie Bédard Marcotte goes on a joyride from Montreal to Los Angeles looking for inspiration... and Miranda July. In this genre-busting road movie, the people she meets are eccentric, the settings kitschy and sublime, the confessions intimate and the questions existential. It’s a pure pleasure to reconnect with the gentle humour of Winter Claire in this sensitive, realistic narrative about the pains of artistic creation and the pleasures of friendship.

Midwife Man (Un homme sage-femme, Martine Asselin); 2018
Louis Maltais loves challenges. At the age of 27, this ex-circus artist began his training to become the first man in Quebec to work as a midwife. Over four years, the film accompanies Louis in a real initiatory journey. Beyond the midwifery practice, it tells a universal story: that of the profound transformation of an individual who, despite hardships, doubts and prejudices, is determined to live his passion.


For Those Who Don't Read Me (A tous ceux qui ne me lisent pas, Yan Giroux); 2018
All his life, Yves has dedicated himself to writing poetry, regardless of the cost to his life and lifestyle. After a chance meeting at a book launch, the now middle-aged Yves storms into Dyane’s life, a graphic designer who falls for his charms and invites him into her home. Her son Marc immediately disapproves of this eccentric stranger in his mother’s bed. Soon enough, however, the studious teenager finds Yves’ rebellious ways attractive and, inspired by the bedraggled poet, begins to explore his own artistic side. Meanwhile, Yves feels increasingly trapped and decides to reinvent himself again. But is it too late? Loosely based on the life and work of Quebec poet Yves Boisvert (1950-2012), Giroux’s debut feature is an impressive tale of one man’s unusual quest for life’s meaning.

The Fall of Sparta (La chute de Sparte, Tristan Dubois); 2018
A shy but intellectual teen takes refuge in reading and music. Until a run-in with a brutish football player forces him out of his self-imposed isolation. Greek mythology and Quebec literature fill Steeve's imagination, represented in the film through visual effects-filled fantasy sequences. But in the end, he can't filter out all the pressures of high school, whether it's awkward attempts at dating, facing down a bully, or dealing with the suicide of a classmate.

A key figure in the cinema of a newly independent Niger in the 1960s and ‘70s, Moustapha Alassane was a fantasist and a fabulist—but by no means was he lost in his own fertile imagination, cut off from contemporary events. Through films that ran the gamut from animations (the first from sub-Saharan Africa) to fiction to ethnographic studies, all of them steeped in Nigerien ritual and tradition, Alassane smuggled stinging satire within deceptively charming fables, his early films winning him the admiration of and prompting creative collaborations with animator Norman McLaren, documentarian Jean Rouch, and Zalika Souley, one of Africa’s greatest actresses. A pioneer of one of Africa’s richest filmmaking traditions, for whom a playful art is the medium of a potent anti-colonialist intelligence.

Co-programmed by Amélie Garin-Davet. With support from the Cultural Services of the French Embassy and special thanks to the Cinémathèque Afrique of the Institut Français. 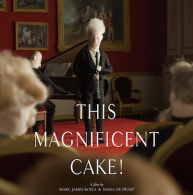 This Magnificent Cake (Ce magnifique gâteau !, Marc James Roels & Emma De Swaef); 2018
This stunning stop motion animation is an anthology about the colonization of Africa at the end of the 19th century, one of the most brutal moments in Belgian colonial history. It is divided into five tales that present a perturbed king, a Pygmee working in a luxury hotel, a ruined businessman, a lost porter, and a young deserter. This film captures the thoughtless and cruel nature of colonialism in a stunning chiaroscuro style that is unusual for animation.

Maurade & Murphy (Hélène Ducrocq, 8 min); 2019 What kind of life do creatures experience that we cannot see? Maraude and Murphy tells the story of a hectic night in the life of two bats. It is a life full of hunting for insects, foraging for other sources of food, and staying one step ahead of their predators.


Home Sweet Home (Le Refuge de l’écureuil, Chaïtane Conversat, 13 min); 2019 An old woman who is a hoarder collects boxes full of souvenirs in her home that she shares with a colony of cockroaches who have become her friends. Her doting granddaughter visits every Wednesday to listen to her spin stories about these treasure. But the little girl is growing up, and space is running out in the cluttered house.

So High Up (Tout là-haut, Martina Svojíková, 12 min); 2019 A family of giraffes is spending their holidays in a far-away forest. The baby giraffe gets lost and meets some of the animals that live there. But a bad-tempered squirrel does not seem at all ready to accept the newcomer. When the others see that he is not only kind but also pretty smart, he soon becomes one of the crowd, much to the annoyance of the grumpy squirrel.

The Big Wolf & The Little Wolf (Grand Loup & Petit Loup, Rémi Durin, 14 min); 2018 Big Wolf lives quite contentedly alone under his tree. One day he sees a Little Wolf approaching him who seems determined to keep him company. But Big Wolf has no need for his company. He likes the quiet life and his routine. At least, that’s what he thought. Loosely based on the children’s book by Nadine Brun-Cosme & Olivier Tallec, published by Flammarion jeunesse.

I Am So Handsome (C’est moi le plus beau, Anaïs Sorrentino and Arnaud Demuynck, 6 min); 2018 One fine morning, Mr Wolf wakes up in an unusually good mood. He spruces himself up and sets off for a walk so that everyone can admire him and confirm that he is indeed the most handsome creature around! He is soon to be sorely disappointed! Adapted from the book C'est moi le plus beau by Mario Ramos, Éditions l'école des loisirs / Pastel, 2006.

Little Spark (Petite Etincelle, Julie Rembauville, 3 min); 2019 A small mouse lives in the middle of books and their epic adventures. When the candle goes out and when the matchbox is empty, it’s her turn to live a dangerous adventure through the house, in search of a small spark.

This is still not a pipe (Ceci n’est toujours pas une pipe, Simon Medard & Siona Vidakovi, 7 min); 2019 In the excitement of a museum an artist with a desire for vengeance gets ready to present his ultimate work.