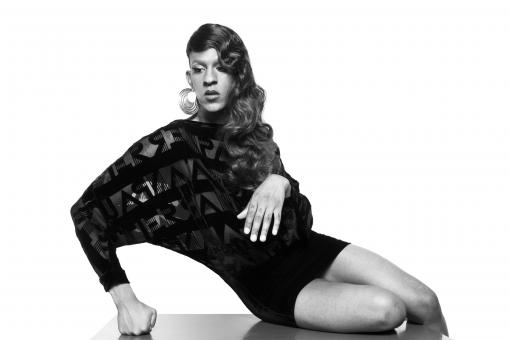 “Affect” names a conceptual problem as much as a tangible thing. As such, it is best understood as an umbrella term that includes related, and more familiar, words such as “feeling” and “emotion,” as well as efforts to make distinctions among them. The Oxford English Dictionary (OED) traces the history of the term to the seventeenth century, aligning it with “desire” or “passion” and opposing it to “reason.” Further specifying that “affect” is both a “mental” and a “bodily” disposition, the OED sets in place a persistent ambiguity that challenges distinctions between mind and body. More technical uses of the term emerge from mid-twentieth-century scientific psychology, where “affect” designates sensory processes or experiences prior to cognition and distinguishes such sensations from the cognitive processes that produce emotions (Damasio 1994)...

Not identifying with any gender, the feeling of having no gender.

The process of sex designation.

The terms “submission/sadism” refer to deriving pleasure from inflicting pain, often in a sexual context. “Masochism” refers to deriving pleasure from receiving pain, often in a sexual context. The terms “bondage” and “domination” refer to playing with various power roles, in both sexual and social contexts. These practices are often misunderstood as abusive, but when practiced in a safe, sane, and consensual manner, can be part of a healthy sex life.

A person emotionally, physically, and/or sexually attracted to males/men and females/women. This attraction does not have to be equally split between genders, and there may be a preference for one gender over others.

As a term that designates the physical or material frame of human and other living beings, “body” has a long career in the language and a relatively brief one as a focus of critical engagement in the study of culture. For Christian theology as for speculative philosophy in the West, the body figures as the devalued term in a structuring dualism of body/soul (in sacred thought) and body/mind (in secular traditions). These dualisms apprehend the body as a material substrate of human life that is fundamentally distinct from and subordinated to the privileged term in the dichotomy (mind, soul), which alone comprehends the human capacity for knowledge and self-knowledge, as well as the repertoire of human sensibilities, dispositions, and affects on which the salvation, expression, or advancement of humanity is understood to depend. In Christian theology as in humanist philosophy, the body turns up on the side of animality or merely mechanical existence and so dwells outside the bounded domain of what is proper or essential to human culture, a domain which the exclusion of the body guarantees...

A person, usually female identified, who identifies themselves as masculine, whether it be physically, mentally or emotionally. Most frequently claimed as an affirmative identity label among lesbian women, and gender non-conforming people designated female at birth.

A person whose gender identity is aligned to what they were designated at birth, based on their physical sex; 2) A non-trans* person.

As a keyword in American studies and cultural studies, the site of a political movement, and the name of an interdisciplinary field, “disability” articulates vital connections across the many communities of people with disabilities, their public histories, and a range of cultural theories and practices. People with disabilities have too often been rendered invisible and powerless because of a mainstream tendency to valorize the normal body. As a result of disability activist work emerging from the civil rights movement, legal reforms, and grassroots activist work, the framing of disability has shifted from an emphasis on “disability” as a medical term to one of disability as a social construction. In the 1980s, disability activists began to move into the academy and to formulate a wide range of scholarship around the keyword. In the first phase, their work centered largely on the analysis and reform of public policy. By the early 1990s, a second phase in the humanities began to analyze the implications of representation on how people think about disability. In more recent years, disability scholarship has shifted to a focus on theories of intersectionality (the ways in which disability interacts with other modes of power and privilege) and transnationality (the ways in which nation-based frames of analysis misrecognize networks of affiliation that cross national borders)...

A person who identifies as a woman or female who dresses in masculine or gender-marked clothing, makeup, and mannerisms for the purpose of performance. Many drag kings perform by singing, dancing or lip-synching; 2) A person who feels connection to a male or masculine identity while wearing masculine clothing, either in a performance space or in everyday life; 3) A person of any gender identity that identifies with masculine drag “king” performance communities.

A person who identifies as a man or male who dresses in feminine or gender-marked clothing, makeup, and mannerisms for the purpose of theater or performance. Many drag queens perform by singing, dancing or lip-synching; 2) A person who feels connection to a female or feminine identity while wearing feminine clothing, either in a performance space or in everyday life; 3) A person of any gender identity that identifies with feminine drag “queen” performance communities.

A person who expresses and/or identifies with femininity; 2) A community label for people who identify with femininity specifically through a queer and/or politically radical and/or subversive context; 3) A feminine-identified person of any gender/sex.

A gender identity where a person identifies as 1) neither or both female and male; 2) Experiences a range of femaleness and maleness, with a denoted movement or flow between genders; 3) Consistently experiences their gender identity outside of the gender binary.

Term used to identify a person who was designated a female sex at birth and currently identifies as male, lives as a man, or identifies predominantly as masculine. This includes a broad range of experiences, from those who identify as men or male to those who identify as transsexual, transgender men, transmen, female men, new men, or FTM. Some reject this terminology, arguing that they have always been male internally and are now making that identity visible, where others feel that such language reinforces an either/or gender system. Some individuals prefer the term MTM (male-to-male) to underscore the fact that although they were assigned female at birth, they never had a female gender identity

The cultural insistence of two diametrically opposed, traditionally recognized genders - male and female; 2) The idea that there are only two genders: male and female. May include a sensed requirement that a person must be strictly gendered as either/or.

How one chooses to express one’s gender identity to others through behavior, clothing, hairstyle, voice, body characteristics, etc. Gender expression may change over time and from day to day, and may or may not conform to an individual’s gender identity.

Gender expression or identity that is outside or beyond a specific culture or society’s gender expectations; 2) A term used to refer to individuals or communities who may not identify as transgender, but who do not conform to traditional gender norms. May be used in tandem with other identities.

The behaviors, attitudes, values, beliefs etc. that a cultural group considers appropriate for males and females on the basis of their biological sex.

An umbrella term for people whose gender identity is outside of, not included within, or beyond the binary of female and male; 2) Gender non-conformity through expression, behavior, social roles, and/or identity.

People whose gender identity and/or expressions are different from the societal norms; 2) Broad term used to describe or denote people who are outside or beyond culturally expected or required identities or expressions.

Lifestyle norm that insists that people fall into distinct genders (male and female), and naturalizes heterosexual coupling as the norm.

Prejudice against individuals and groups who display non-heterosexual behaviors or identities, combined with the majority power to impose such a prejudice.

Personal identity conventionally arbitrates taste and lifestyle. “It’s just not me,” a potential home buyer says to her realtor. “That’s so you,” a helpful friend appraises as the shopper steps out of the dressing room. An “identity crisis” is a crisis rather than an “identity opportunity” because personal identity demands proper and unimpeded expression. It is a value, something we prize. This sense of identity as ours implies an immutable essence unchanged by physical development or external circumstances. The Oxford English Dictionary dates the origins of this usage to the late sixteenth century, but it has recently been challenged by social theory and postmodern conceptions of subjectivity, and feminist theory has generated especially rich rethinkings of our notions of identity...

One who is born with sex chromosomes, external genitalia, and/or an internal reproductive system that is not considered “standard” or normative for either the male or female sex.

Term used to identify a person who was designated a male sex at birth and currently identifies as female, lives as a woman, or identifies as feminine. This includes a broad range of experiences, from those who identify as women or female to those who identify as transsexual, transgender women, transwomen, male women, new women, or as MTF as their gender identity. Some reject this terminology, arguing that they have always been female where others feel that such language reinforces an either/or gender system. Some individuals prefer the term FTF (female-to-female) to underscore the fact that though they were assigned male at birth, they never had a masculine gender identity.

Describes a gender identity that is neither female nor male; 2) Gender identities that are outside of or beyond two traditional concepts of male or female.

The ability to present oneself as their chosen gender identity rather than one’s assigned gender; 2) Being normatively accepted as one’s promoted identity, as part of specific cultural expectations; 3) An individual’s desire or ability to be perceived as a member of a particular gender, race, or cultural group.

An umbrella term representative of the vast matrix of identities outside of the gender normative and heterosexual or monogamous majority. Reclaimed after a history of pejorative use, starting in the 1980s; 2) An umbrella term denoting a lack of normalcy in terms of one’s sexuality, gender, or political ideologies in direct relation to sex, sexuality, and gender.

BOOK KEYWORDS FOR AMERICAN CULTURAL STUDIES
BY RODERICK A. FERGUSON

The study of race incorporates a set of wide-ranging analyses of freedom and power. The scope of those analyses has much to do with the broad application of racial difference to academic and popular notions of epistemology, community, identity, and the body. With regard to economic and political formations, race has shaped the meaning and profile of citizenship and labor. In relation to corporeality, race has rendered the body into a text on which histories of racial differentiation, exclusion, and violence are inscribed. Analyzed in terms of subjectivity, race helps to locate the ways in which identities are constituted...

An individual’s physical and/or emotional attraction to and desire to sexually or emotionally partner with specific genders and/or sexes. e.g., homosexual, heterosexual, bisexual, pansexual, asexual.

Umbrella term, originated from Transgender (see below). Used to denote the increasingly wide spectrum of identities within the gender variant spectrum. The asterisk is representative of the widest notation of possible trans* identities. Aimed at promoting unification among gender variant communities by placing focus on gender transgression over specific identity labels, genders, or bodies.

The fear, hatred, or intolerance of people who identify or are perceived as transgender; 2) Fear and hatred of all those individuals who transgress, violate or blur the dominant gender categories in a given society.

Native American term to describe person who embodies attributes of both masculine and feminine genders, have distinct gender and social roles in their tribes, and are often involved with rituals. Their dress is usually mixture of male and female articles and they are seen as a separate or third gender. The term two-spirit is sometimes considered specific to the Zuni tribe. Similar identity labels vary by tribe such as Wintke (Lakota), Hee-man-eh (Cheyenne), and Nedleeh (Navajo); 2) Native Americans who are queer or transgender.