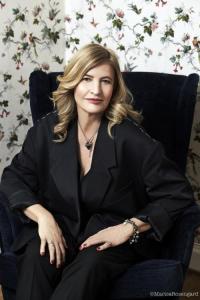 Title: "The Dark Side of the Universe"

Abstract: The ordinary atoms that make up the known universe, from our bodies and the air we breathe to the planets and stars, constitute only 5% of all matter and energy in the cosmos. The remaining 95% is made up of a recipe of 25% dark matter and 70% dark energy, both nonluminous components whose nature remains a mystery. Freese will recount the hunt for dark matter, from the discoveries of visionary scientists like Knut Lundmark and Fritz Zwicky, the astronomers who coined the term "dark matter" in the 1930's, to the deluge of data today from underground laboratories, satellites in space, and the Large Hadron Collider. Theorists contend that dark matter consists of fundamental particles known as WIMPs, or weakly interacting massive particles. Billions of them pass through our bodies every second without us even realizing it, yet their gravitational pull is capable of whirling stars and gas at breakneck speeds around the centers of galaxies, and bending light from distant bright objects. In this talk Freese will provide an overview of this cosmic cocktail, including the evidence for the existence of dark matter in galaxies. Many cosmologists believe we are on the verge of solving this mystery and this talk will provide the foundation needed to fully fathom this epochal moment in humankind's quest to understand the universe.

Katherine Freese is the George E. Uhlenbeck Professor of Physics at the University of Michigan and Visiting Professor at Stockholm University. She works on a wide range of topics in theoretical cosmology and astroparticle physics. She has been working to identify the dark matter and dark energy that permeate the universe as well as to build a successful model for the early universe immediately after the Big Bang. She is author of a book The Cosmic Cocktail: Three Parts Dark Matter, published in June 2014 by Princeton University Press.

Freese received her B.A. in Physics from Princeton University (as far as she knows, she was the second woman to major in Physics at Princeton); her M.A. in Physics in 1981 from Columbia University; and her Ph.D. in Physics in 1984 from the University of Chicago, where she was recipient of the William Rainey Harper Award Fellowship. Her first postdoctoral position was at the Harvard/Smithsonian Center for Astrophysics, followed by a postdoctoral fellowship at the Kavli Institute for Theoretical Physics at Santa Barbara, and a Presidential Fellowship at the University of California, Berkeley. She was an Assistant Professor at MIT from 1987-1991, where she was recipient of a SLOAN Foundation Fellowship as well as an NSF Presidential Young Investigator Award. Then she moved to the University of Michigan where she is now the George Eugene Uhlenbeck Professor of Physics.

Freese has 300 publications in physics and astronomy journals and is author of a book, The Cosmic Cocktail: Three Parts Dark Matter published by Princeton University Press. Dr. Freese’s work has been described in the New York Times, Scientific American, New Scientist, National Public Radio, BBC, Boston Globe, Dallas Morning News, and other popular media. Her public appearances include Through the Wormhole with Morgan Freeman on The Science Channel; BBC TV; numerous appearances on BBC Radio; CBC Radio; TV Ontario; Big Think; The World Science Festival in New York; and the Isaac Asimov Debate at the Museum of Natural History in NY.

Dr. Freese has served on many advisory panels and committees, including the following: She was a Member of the Board of the Kavli Institute for Theoretical Physics in Santa Barbara from 2000-2003; General Member of the Board of the Aspen Center for Physics from 1993-2003; a member of the Astronomy and Astrophysics Advisory Committee (AAAC; mandated by Congress) from 2003-2008; the DMSAG (Dark Matter Scientific Advisory Group) in 2007. She served as Member of the Executive Board and General Councilor of the American Physical Society. She was also Member of the International Advisory Board for the Oskar Klein Center for Cosmoparticle Physics in Stockholm, Sweden.