Campus Maps:
You can see an interactive and downloadable map of the campus and its buildings.

T.F. Green International Airport is located about ten miles south of Providence. The campus is served by a shuttle, Airport Limousine Co., which leaves the airport on the hour and arrives on campus about 15 minutes later. There are also taxis available at the airport.

Boston's Logan International Airport (BOS) . Boston is about an hour away from Providence, and the transit system between there and here is fairly good. Take a Peter Pan bus to Providence (approximately a 50 to 60 minute ride).  The Omni Hotel is a 5 minute walk.  Be sure to get off at Downtown Providence.
Peter Pan Bus Schedule:  http://www.peterpanbus.com/tickets/schedules-and-fares.php

By Train/Bus: Terminals for Amtrak, which offers national service, and MTBA, the Boston area commuter rail lines, are located in Providence's downtown district. The Biltmore is a five minute from the Train Station.

Peter Pan Bus Lines offers a stop at Kennedy Plaza.  The Omni Providence Hotel is a five minute walk
from the bus stop.  Be sure to get off at Downtown Providence.

By Automobile:
From the North or South: From either I-95 South or I-95 North, take Exit 22A, Downtown, Memorial Boulevard.  Biltmore Hotel is within a two minute drive as shown on map. 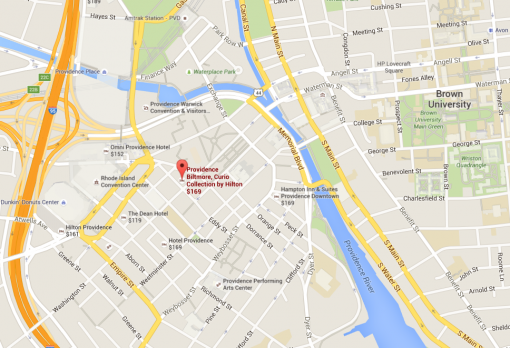