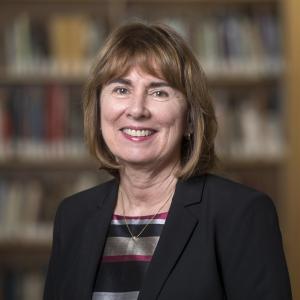 Jill Pipher is Elisha Benjamin Andrews Professor of Mathematics and has been Vice President for Research at Brown University since July 2017.

As Vice President of Research, she has led a strategic expansion of research activity that has included the largest federal award in university history, for Alzheimer’s research, as well as Brown’s largest National Science Foundation award to renew funding for the Institute for Computational and Experimental Research in Mathematics (ICERM), of which she was founding director from 2010 to 2016. She has also steered Brown toward diversifying its research funding sources through increased focus on research development and Brown Technology Innovations.

Pipher is the immediate past president of the American Mathematical Society (AMS), an organization of 30,000 members worldwide dedicated to furthering mathematics research, scholarship and education. Her two-year term as president ended January 31, 2021.

For both Brown and the American Mathematical Society, she is active in advocacy about the role of research and mathematics in society, frequently speaking in Washington, D.C., and around the world.

Pipher’s research areas include harmonic analysis, partial differential equations and lattice-based cryptography. She has frequently lectured for both specialist and general audiences at venues in the U.S. and abroad. In 2014, she was an Invited Speaker at the International Congress of Mathematicians. She has published many papers in her areas of expertise and has co-authored an undergraduate cryptography textbook.  She jointly holds four patents related to the NTRU encryption algorithm and was a co-founder of Ntru Cryptosystems, Inc.

Pipher’s professional honors include an NSF Postdoctoral Fellowship, an NSF Presidential Young Investigator Award, and an Alfred P. Sloan Foundation Fellowship. She was an inaugural Fellow of the American Mathematical Society, served as President of the Association for Women in Mathematics from 2011 to 2013, and was a National Women’s History Month 2013 Honoree. In 2015, she was elected to the American Academy of Arts and Sciences, and in 2019 she was elected as Fellow of the Society for Industrial and Applied Mathematicians.