Each time a Proposal Development (PD) record is either created from scratch or copied, one of the Aggregators on that record should check all the other Aggregators assigned to that record.  Any Aggregator has full ability to manage who has an edit or view role on a PD record.

Reviewing who has access to your record is important especially when copying PD records.  This ensures that you remember to remove anyone who should not have a role on that record, including those who have left your department or their position, but were on the original PD record. If left on the record, that individual's old roles will copy in when the PD copy is made.

As an Aggregator, a first, best practice should be to remove any inactive employees and their role from the proposal before completing all other areas of the proposal record.  Doing so also avoids errors that occur in the Narrative section when a person has left the University but has an old role sitting on your PD record.  They must be removed at the record level by an Aggregator.

Having an inactive employee in an Aggregator role causes Narrative editing errors that may:

Here are the steps to check the proposal roles and remove an Aggregator who should no longer have access to your PD record: 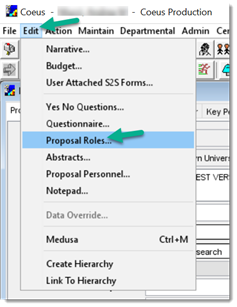 2) Click and drag the person who needs removal from the proposal record.

a. Drag them to the trashcan icon.
b. Click the Ok button. The window will close.
c. Save the record to save your changes. 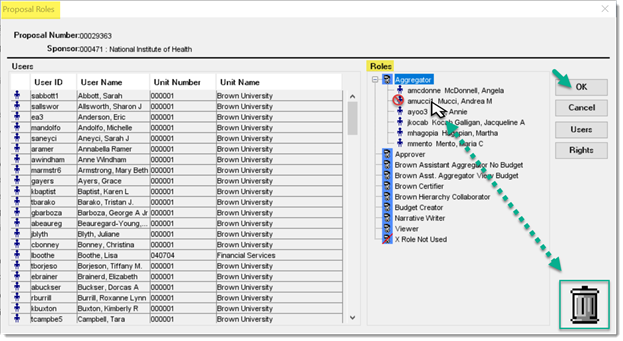 Also, if you notice an inactive employee in an Approver role on your PD record, please inquire with your department manager to ensure that any previous managers or Chairs had their approval role removed from Coeus when they left their position.  Leaving this inactive Approver on the record can cause the same Narrative errors as an inactive Aggregator.

Unlike inactive Aggregators, inactive Approver roles cannot be removed at the record level by an Aggregator and require a Coeus Access ticket be submitted with the request to “remove department approver role” in the notes.  You should also note whom the replacement person is for that approver in your ticket request.