This Technology May Be the Future Of Solar Energy 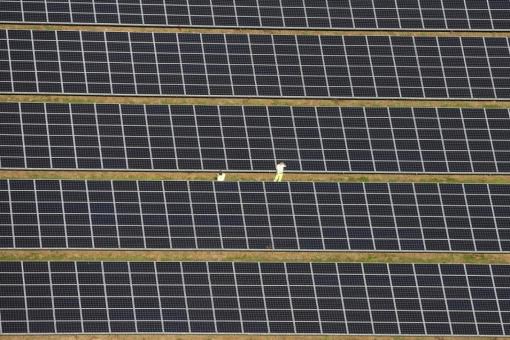 Solar panels sit in an array at the Southwick Estate Solar Farm, operated by Primrose Solar Ltd., near Fareham, U.K., on Friday, Oct. 2, 2015. The plant, situated in 200 acres (81 hectares) of farmland, consists of 175,000 monocrystalline PV modules and has a capacity of 48 megawatts. Photographer: Simon Dawson/Bloomberg

In the solar energy sphere, scientists and economists alike will note that coming up with cheaper, most efficient solar cells is key to the industry's growth. And now, many experts are arguing that an emerging type of technology, known as the "perovskite" solar cell, is the face of the future.

Solar cells, the devices that convert solar energy into electricity, only come in so many forms at the moment. Most of the ones in commercial use are made of silicon. But while these silicon cells dominate the market, they're far from perfect — on average, they're only able to achieve 16 to 20 percent efficiency when it comes to converting solar energy, said Michael McGehee, a professor of materials science and engineering at Stanford University. And they can be expensive both to produce and to install.

As a result, researchers around the world have dedicated themselves to coming up with cheaper and more efficient solar cells. A great deal of this research is conducted by private companies and is involved with improving the existing silicon cell technology. But some researchers are focused on developing other up-and-coming types of solar cells using different materials and production techniques.

One of these emerging products is the perovskite solar cell, a cheaper product with the potential to be just as efficient — if not more-so — than traditional silicon cells, according to recent research. The word "perovskite" refers to the type of material the cell is made out of. A perovskite material has a special type of crystal structure — calcium titanium oxide is one example, but other materials can have similar structures and be referred to as perovskites.

Around 2009, researchers started trying to make solar cells using perovskite materials, said Nitin Padture, director of the Institute for Molecular and Nanoscale Innovation and professor materials science at Brown University. And while the first of these experiments only achieved an efficiency of less than 5 percent, scientists have since improved them drastically. Now, they're recognized by some experts as one of the most promising innovations in solar research.

The promise of perovskites

The major appeal of perovskite solar cells is that they’re cheap — “much cheaper than something like silicon,” Padture explained. High-quality silicon crystals must be made at high temperatures using very precise processes, he said. Perovskite cells, on the other hand, can be made at nearly room temperature using simpler methods, so production is not so costly.

Of course, lower costs don’t mean much if the cells can’t compete with the efficiency of traditional silicon cells. But in the lab, at least, scientists have succeeded in producing perovskite solar cells with efficiency levels comparable to those of commercially used silicon cells — upwards of 20 percent.

Perovskite solar cells are in no way ready for commercial use yet — Padture predicts that point is still at least 5 to 10 years away — but the early promise has led researchers to explore a number of different applications for the cells. On the one hand, if their costs and efficiency levels become competitive enough, they could be used alone in solar arrays in the same way that silicon solar cells are widely used today. However, some researchers believe the real future of solar energy lies in a new experimental technique that layers perovskite solar cells on top of silicon cells in order to maximize their total efficiency.

The reason this technique seems promising is because silicon cells capture sunlight at slightly different wavelengths than perovskite materials, said McGehee, the Stanford researcher. So if you put them together, they’re able to take advantage of a bigger segment of the spectrum than either would alone.

From a business perspective, this strategy makes sense as well, McGehee added. “I think this is one of the more compelling [pathways] because it’s not going head to head with silicon, it’s partnering with silicon,” he said.

There are so many companies and so much money and research invested in silicon solar cells already that it might be hard for perovskite solar cells to break into the market alone, even if they become truly competitive, he noted. The tandem cells are a way to boost the efficiency of solar panels and help grow the solar industry in a way that benefits everyone and minimizes competition between the different types of materials.

But there are other promising applications as well, Padture pointed out. Unlike silicon cells, perovskite solar cells can be transparent or even made into different colors. This means they can be placed in spots that wouldn’t be appropriate for opaque silicon panels, such as windows.

So when you consider these types of applications, perovskite cells “don’t need to compete with silicon,” Padture said. “They have a niche — something unique.”

Perovskites still have a long way to go before they’ll be fit for the market. For one thing, the competitive efficiency levels that have been produced in the lab wouldn’t necessarily stand up under practical conditions. That’s because most perovskite solar cells that have been produced in the lab are very small, Padture noted — less than a centimeter square. In contrast, many commercially used solar panels are a foot square or even larger.

Unfortunately, there are some challenges to producing larger perovskite solar cells with competitive efficiency levels, according to Padture. Perovskite cells are typically made by combining different chemical solutions to produce a very thin layer, called “film” — the part of the solar cell that converts sunlight into electricity.

But while the low-temperature processes used in perovskite solar cells produce high-quality films in small quantities, “the quality of the films is not very reproducible over large areas,” Padture said. When researchers try to produce larger cells, the film often comes out with defects or holes.

However, there’s been clear progress in this area. Padture and colleagues recently published research describing how they’d been able to improve efficiency in larger solar cells by using different solvents or by dissolving a certain type of gas into the film, which helps to remove defects and can later be removed.

But there are other hurdles as well. Perovskite solar cells aren’t as physically stable as silicon solar cells. “When you expose these cells to humid air, they basically degrade in a couple of days or weeks,” Padture said. In addition, perovskite solar cells typically contain a form of lead that can leach into the environment — so in order for the cells to be viable, they need to be sealed inside a kind of polymer case that protects them from exposure to air and water.

This is a field that McGehee’s lab is currently working on — and while their most recent results are not yet published, McGehee noted that “we’ve made really really nice progress at Stanford in just the last couple of months.”

The future of the industry

There are already a few companies investing in perovskite research, including Oxford PV, which was founded to commercialize technology produced by the University of Oxford. Just last week, co-founder Henry Snaith, a physics professor at Oxford, and a group of his colleagues published research in the journal Science describing a method of improving the efficiency of tandem cells involving perovskite solar cells.

Although Padture and McGehee both agree that the technology is at least five years away from commercialization, Padture said he hopes the federal government will invest more resources into its study, as research into the improvement of silicon solar cells is already well-covered by private companies.

“It doesn’t make sense for the government to invest in something like [silicon] because the companies have a motivation to reduce the cost and improve efficiency and improve durability and reliability because they’re already making money off them,” Padture said. “These still experimental [techniques] — this is where I think the government should be investing.”

In combination with other actions, such as improved systems for solar subsidies and the initiation of a carbon tax, research into emerging solar technologies can help continue to make the solar industry competitive — and, naturally, benefit the environment, according to Padture.

“I firmly believe that research into emerging materials, emerging technologies, is where the future is,” Padture said.

-Chelsea Harvey is a freelance journalist covering science. She specializes in environmental health and policy.