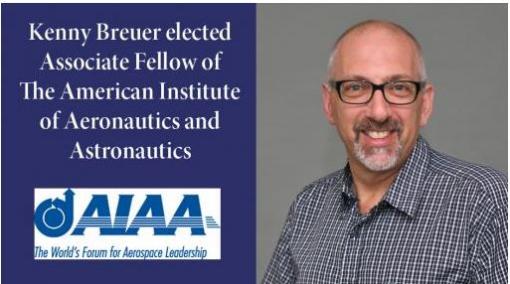 Kenny Breuer, Senior Associate Dean for Academic Programs and Professor of Engineering at Brown University, has been elected an Associate Fellow of the American Institute of Aeronautics and Astronautics (AIAA).

AIAA Associate Fellows are “individuals who have accomplished or been in charge of important engineering or scientific work, or have done original work of outstanding merit, or have otherwise made outstanding contributions to the arts, sciences, or technology of aeronautics or astronautics.”

Breuer will be recognized at the AIAA Associate Fellow dinner on January 13, 2014, in National Harbor, Maryland, in conjunction with the AIAA SciTech Forum.

Breuer received his Sc.B. from Brown and his M.Sc. and Ph.D. from M.I.T. He spent nine years on the faculty of M.I.T. in the department of Aeronautics and Astronautics, before returning to Brown in 1999.

His research interests are in fluid mechanics covering a wide range of topics, including the physics of flows at micron and nanometer scales, bat flight, and the physics and control of turbulent flows.