Research in the Bubble Lab

In our research we are trying to understand what happens when an electron is placed into liquid helium. Although this is, in principle, a very simple system (helium has essentially no chemical properties), there are many interesting effects that are not understood.

where R is the radius of the bubble, m is the mass of the electron, is the surface tension of the liquid, and P is the pressure. If no pressure is applied, the bubble has its minimum energy when the radius is 19 Å. 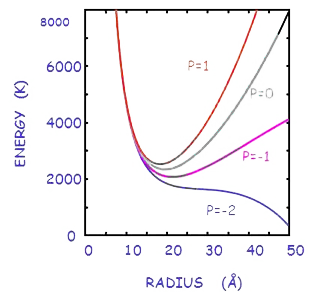 This is a plot of the energy of an electron bubble as a function of the radius. The different curves are for diffrent pressures measured in bars.

Electrons can be introduced into the liquid from a sharp tip, by  means  of  a radioactive source, or from an electrical discharge in the helium vapor above the liquid. The details of how the electron forms a bubble after it enters the liquid are not completely understood. But once the bubble is formed it is a stable object. It can be moved through the liquid by the application of an electric field. If a large number of electrons are introduced into the liquid, an electric field (space charge field) will be produced which will drive the bubbles away from each other. When a bubble reaches a metal wall forming the boundary of the helium container, the electron can escape into the wall. The bubble then collapses.

The idea that an electron in helium would form a bubble was first proposed by Richard Ferrell in 1956 [1]. The early studies of the bubbles measured how fast they moved through the liquid under the influence of an electric field (mobility measurement) [2]. This mobility is limited by the collisions of thermal excitations (rotons and phonons) with the bubbles, These collisions result in a drag force on a moving bubble. In the 1990’s the first measurements were made of the absorption of light by the bubbles. This measurement was important because it provided a way to confirm that the bubble did have the size expected theoretically [3, 4].

In our lab we have developed a new method based on ultrasonics which makes it possible to detect individual electrons and follow their motion. We have used this method to determine the mechanical properties of the electron bubbles, and performed experiments in which the bubbles are exploded and grow large enough to be seen. We have also used a version of this method to make movies of single electrons and have detected some much larger bubbles which contain many electrons (multi-electron bubbles).

In addition to the “normal” electron bubble there are other negatively charged bubbles which have been detected in liquid helium. These are not understood. These were first seen many years ago and have become known as “exotic ions”. These ions appear to be smaller than normal electron bubbles and to be singly charged. Recently, we have been able to make more detailed studies of these ions using a new ion mobility apparatus which we have constructed in our laboratory. We have also used the ultrasonic technique to detect another type of electron bubble which is larger than the normal bubble [5].

By shining light of the appropriate wavelength onto an electron bubble, it is possible to excite the electron into a higher energy state. Light from a carbon dioxide laser excites the bubble to the 1P quantum state. When the electron is in the 1P state the shape of the bubble changes. it is straightforward to calculate the change in the shape. So far we do not have a technique to measure the change in the shape, but we are able to detect these 1P bubbles because they explode at a different critical negative pressure.

In other experiments we have used an ultrasonic technique to produce multi-electron bubbles, to follow the motion of other small particles in the liquid, and to see how these particles interact with quantized vortices.

The students working on these projects have also created computer programs to simulate what happens in the experiments.

This area of research uses a wide variety of experimental and theoretical techniques. The experiments require an understanding of cryogenics, electronics, optics, and vacuum techniques. Analysis of the data involves statistical analysis and computer simulations. Here are links to the people who have worked on this research including some of our collaborators and to recent publications.