These ions have been detected in experiments in which electrons entered the liquid from a plasma formed by an electrical discharge in the vapor above the liquid surface; the fast ion has been seen also when an alpha source [1] was used for generation.

Here is a schematic drawing of a new apparatus we have built to study the exotic ions. 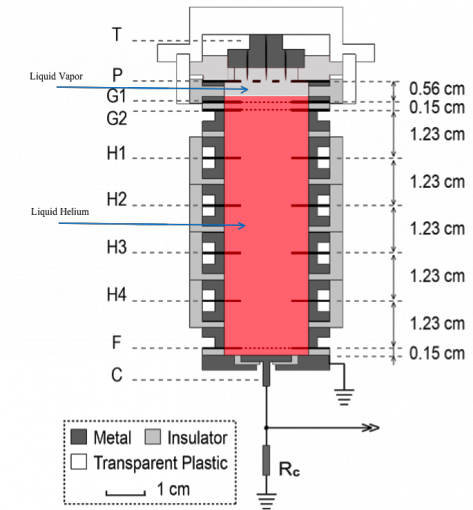 High voltages are applied to the electrodes in the upper part of the cell and an electrical discharge is produced in the helium vapor. Electrons enter the liquid from the vapor. The dc voltages on the gating grids G1 and G2 are set to prevent negatively-charged ions passing through. By applying a negative pulse to G1 the gate is opened for a few hundred microseconds and a pulse of ions enters the drift region below G2. The ions arriving at the collector plate C give a voltage which is amplified and then averaged.

The apparatus has been constructed so that measurements can be made under stable conditions for extended periods of time. This is an important improvement compared to the earlier experiments and has enabled us to make very careful measurements of the mobility of the different ions as a function of temperature and to investigate how the strength of the signals due to the different exotic ions vary with conditions in the discharge.

Here is a typlical plot of the current arriving at the collector as a function of time (red curve). Each peak rises from a different exotic ion. [4]

The results we have obtained indicate that we are seeing the same objects as discovered in the earlier experiments. This makes it very unlikely that the exotic ions are associated with impurities.

We have analyzed data of the type shown in the above figure and have made a very surprising discovery. We made a fit to each of the peaks appearing in the data and then subtracted the contribution from the peak. When we did this we discovered that there was a smoothly varying background left over. This is shown as the dashed blue curve in the figure. When the electric field in the drift region or the temperature is changed this background shifts in time in the same way as do the peaks due to the individual exotic ions. This means that the background must come from ions, and that these ions have a continuous distribution of mobility. A continuous distribution of mobility means that the ions must have a continuous distribution of size.  This is remarkable since normally each state of a quantum system has a discrete and definite size.

We have recently improved the signal to noise by using carbon nanotube tips instead of tungsten. With theses tips we have been able to detect a total of 18 exotic ions. [5 ]