As embryogenesis proceeds from a totipotent zygote into a multicellular organism, diverse cell types are specified by a progressive loss of potency. By contrast, germ cells retain the potential for totipotency and give rise to the next generation.

The juvenile sea urchin is patterned from cells that are set-aside during embryogenesis and shuttled into the larval coelomic pouches, the site of adult rudiment formation. Cells that contribute to the coelomic pouches come from various early embryonic lineages, including the small micromeres lineage. We are testing the role of Vasa, Nanos, and Piwi, three conserved germ line markers, in sea urchin development. We find that Vasa, Nanos, and Piwi are selectively expressed in the small micromere lineage during embryogenesis. As larval development proceeds, the domain of Vasa expression expands to the entire developing adult rudiment. Thus, Vasa is not a strict germ line marker in the sea urchin, but may instead indicate multipotency. Functional analysis revealed that Nanos is required to maintain the identity of small micromeres as “set-aside” cells. Nanos-depleted small micromeres ectopically divide and are not incorporated into the larval coelomic pouches. Thus, the small micromeres are likely multipotent cells that give rise to many tissues, which probably includes, but is not limited to the germ line. We hypothesize that the germline is segregated late in larval development, rather than during embryogenesis. Furthermore, we propose that the sea urchin uses a 2-step germline determination mechanism: first a long-term multipotent precursor is specified from which later the primordial germ cells (PGCs) are segregated. Our work suggests a broader role for the traditional germline genes Vasa, Nanos, and Piwi in establishing and maintaining the fate of multipotent cells in 2-step germline determination. 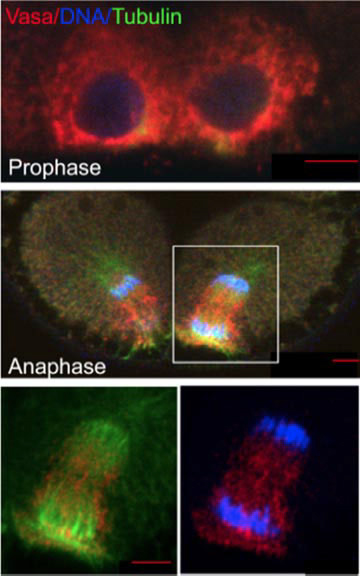 Vasa, an ATP-dependent RNA helicase, is broadly conserved among various organisms from cnidarians to mammals. It has a rich history of utility as a germline marker, and is believed to function as a positive translational regulator in the determination and maintenance of germline cells. Studies in non-model organisms including our favorite animal sea urchins, however, revealed that Vasa is also present in somatic cells of many tissues. In many cases these cells are multipotent, are non-germline associated, and give rise to a variety of different tissue types. Our recent work demonstrated that Vasa functions in the regulation of the cell cycle during early embryogenesis of the sea urchin. Additional evidence from our ongoing research suggests that sea urchins utilize this molecule Vasa in multiple cell lineages (embryonic cell, germ cell, and adult stem cell) for multiple functions (cell cycle, germ cell specification and potentially regeneration).

Translational repression by Nanos in echinoderms 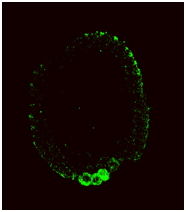 Nanos is a RNA-binding protein which was first described as a translational repressor in Drosophila. The translational repression is mediated through interaction between nanos and pumilio, which binds RNAs such as hunchback and cyclin B. These target RNAs contain a conserved motif, the Nanos Response Element, in their 3’UTR. Nanos is required for the survival and maintenance of primordial germ cells during embryogenesis. Its expression is highly regulated at the RNA and protein level, any misexpression induces cell cycle and developmental defects. Nanos has been found in all animals tested. In the sea urchin, three nanos homologs are present in the genome of Strongylocentrotus purpuratus (Sp), and all of them are expressed, with differential timing, in the small micromeres (SMM). Morpholino injection against Sp nanos1 and Sp nanos2 indicates that in the sea urchin, these homologs are required for adult rudiment formation. Now, using two sea urchins, Sp and Hemicentrotus pulcherrimus (Hp), our results show that a combination of selective RNA retention, translational control, and protein stability mechanisms instills selective nanos expression in the SMM lineage.

Calcium signals play key roles in regulating diverse physiological processes. Metazoans have three main intracellular Ca2+ mobilizing messengers: IP3, cADPR and NAADP. Both cADPR and NAADP, which are generated by the same enzymes (ADP-rybosyl cyclases, ARCs), were identified as Ca2+ mobilizing messengers using a sea urchin egg homogenate, and this system continues to be a vital tool for investigating the mechanism of action of these two messengers. Despite cADPR and NAADP having been implicated in diverse physiological processes, and the demonstration that loss of the ARC enzyme in the mouse leads to disease states including diabetes and metabolic disturbances, the molecular mechanisms underlying ARC action and regulation has remained enigmatic. Dr. Wessel’s group has recently made two important steps forward in the understanding of these issues by firstly demonstrating that in urchin eggs the endogenous active ARC forms are located within the lumen the cortical granules; and secondly identifying the two pore channel (TPC) proteins as integral components of the NAADP-targeted channel. In this context, the aim of this project is to gain key insights into the mechanisms of action of these two protein families, ARCs and TPCs. This project addresses two main questions: 1) How is the NAADP signaling output mediated amongst the three TPCs isoforms? and 2) How does interfering with ARC and TPC expression affect calcium signaling events in the egg and embryo and key physiological processes during fertilization and development? The first question is based on the fact that TPCs in sea urchins and starfish are present as three isoforms, and that they are differentially located and expressed in the eggs, and therefore might have different functional roles. We are will use reporter tagging of mRNAs encoding the TPCs and antibodies against the TPCs isoforms to identify the specific organelles populated by these isoforms. We expect to identify the specific organelles in which the TPC isoforms are located, and to determine how these TPCs are targeted differentially. In the second question, we intend to determine which ARCs and TPCs mediate physiological processes in the egg in response to physiological stimuli. We are currently using several approaches to interfere with ARC and TPCs function, such as commercially available NAADP antagonists and morpholinos. By studying the abnormalities in developmental processes caused by these enzyme malfunctions, we expect to gain vital insights into the link between cADPR and NAADP induced Ca2+ signals and the regulation of physiological processes in all cells. 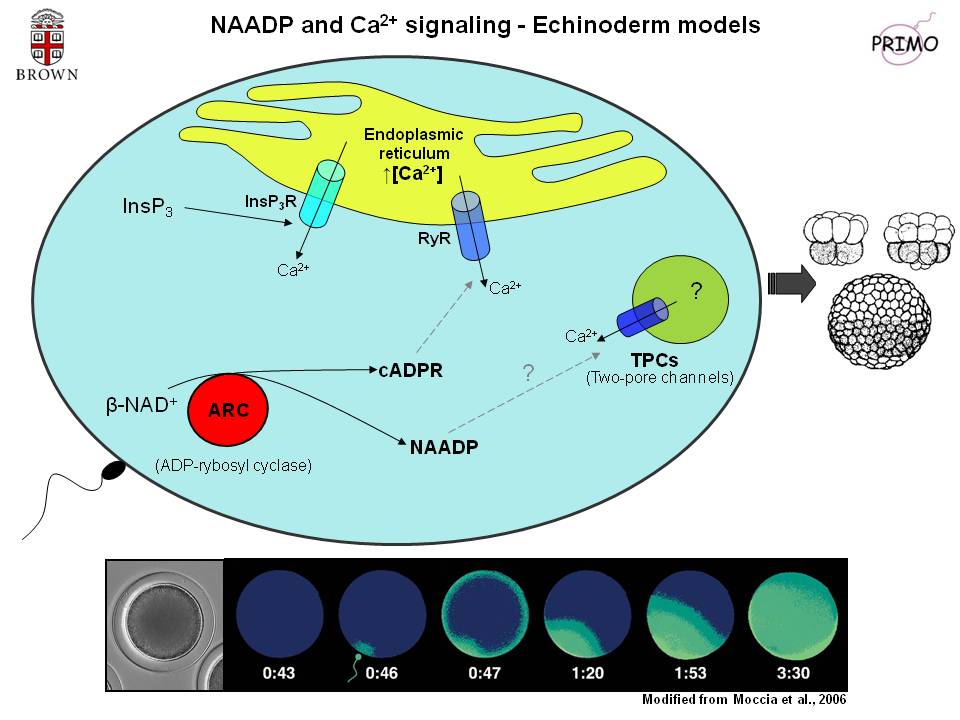 Much of early animal development is driven by mRNAs, proteins, mitochondria and other maternally deposited materials in the oocyte. This maternal endowment is essential in most cases for success of an embryo in early development. We are interested in what mRNAs are present in oocytes, and the variation found between individual oocytes because those differences may be able to predict the range of possible developmental outcomes even when considering the oocytes from the same female. We measure the transcriptomes of single cells (oocytes or polar bodies biopsied from the oocyte), within the same genotype (in the case of mice) or between genotypes (different mouse backgrounds or human IVF/ART patients). The biological variability of transcriptomes can be quantified between single cells within a genotype and the comparison between genotypes can reveal genes that are differentially expressed in a robust manner. We also demonstrated that detection and quantification of mRNA in human polar bodies is possible and reflects the transcript profile of the MII oocyte. The quantification of mRNAs is of particular importance since some transcripts have highly variable expression between oocytes, this variance is reflected in the polar body, and these variations may explain differences in developmental outcome.

Multidrug resistant (MDR) transporters are cell membrane proteins that belong to the ATP binding cassette (ABC) efflux transporters that are evolutionarily conserved for their ability to protect cells from toxins. Our objective is to determine whether immature oocytes’ MDR transport activity increases as oocytes mature in vitro. We demonstrate in our experiments that MII oocytes have improved mechanisms of effluxing transporter-dependent fluorescent dyes. Our work has also shown that susceptibility to ootoxic chemotherapeutic agents is mediated by MDR transport.