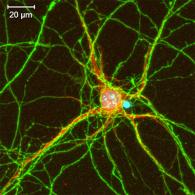 Neurodevelopmental disorders such as autism and intellectual disability are common and cause profound morbidity in populations worldwide. The associated costs to society are high and that to families are immeasurable. Intellectual disability (ID, formerly mental retardation), the most common developmental disability, occurs in 2% of people, and ranks first in the US as a cause of lifelong disability (National Center for Health Statistics U.S., 1996). Autism spectrum disorders (ASDs) occur in approximately 1 in 200 children. ID occurs in up to 50% of children with ASD and epilepsy occurs in approximately 25% of children affected by ASD.

Research SideThe Developmental Disorders Genetics Research Program investigates the genetic and molecular mechanisms underlying disorders of cognitive development. The long-term aim of this research is to establish a basic foundation for improved genetic diagnoses and treatment interventions designed to enhance cognitive and functional gains for patients. Because these disorders are highly genetic and in order to identify core molecular mechanisms, genome-wide "forward genetic" strategies to identify genetic mutations have been a principal focus. In complement to this, molecular and neurodevelopmental studies of identified pathways are underway.

Research in the Morrow Lab thereby follows two synergistic approaches: 1) human genetic studies in patient and control samples; 2) molecular neurodevelopment studies of identified pathways. In the first approach, the lab has a strong interest in rare genetic variation, including both genomic copy number and sequence changes. Our own data and that from the field as a whole have demonstrated a large and increasing number of heterogeneous loci in developmental disorders. Through extensive regional and international collaboration, we are establishing large datasets of genome-wide microarray data which are studied using new bioinformatic strategies. In molecular studies, we are focusing on neurodevelopmental mechanisms whereby these heterogeneous genes and loci appear to converge, which includes mechanisms involved in synaptic maturation. We are developing experimental models for studying disease genes and mutations in this process. In both our genetic and mechanistic studies, we are also implementing next generation sequencing technologies, as these new methods now provide a power in genomic analysis which has been previously unattainable. Whereby several genetic loci under study have also been implicated in schizophrenia (another neuropsychiatric disorder with developmental and cognitive features), the lab is working through collaboration to understand the role that pathways of interest may play in this condition as well.