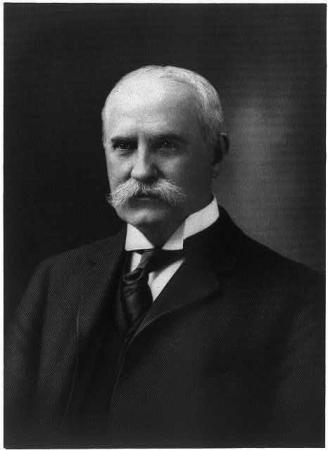 Nelson Wilmarth Aldrich was elected in 1881 to the U.S. Senate as a Republican from Rhode Island and served until 1911.

One Senate seat that the Democratic Party was never worried about this year was Rhode Island where Jack Reed was running for his 4th term as U.S. Senator.  In this case study, my research assistant Nhat-Dang Do and I examine the state of Rhode Island, and chart the course of Senator Nelson W. Aldrich (R), who served in the Senate from 1881 to 1911, and Jack Reed. Comparing the two U.S. Senators, elected more than 100 years apart, allows us to explore if and how the path to office has changed at all, regardless of the mode of election.  We find that within the careers of these two men, it is possible to identify common essential elements to career building, mainly in the use of legislative tools to cater to their constituents and party in order to build a reputation and record that may be exploited for reelection.[1]

John Francis Reed (Jack Reed) was born to a public school custodian and a factory worker in the small town of Cranston, Rhode Island. Graduating from West Point, Senator Reed served in the army for a period of time before entering Harvard University for a Master’s degree in Public Policy and eventually a law degree. Similar to the story of many other U.S. Senators, Reed built his career first in the state legislature, as a state senator, then in the U.S. House of Representatives for six years before entering the U.S. Senate.[2]  Reed’s early career in politics was relatively obscure. In his time in the state Senate as well as the U.S. House of Representatives, Reed slowly built up his legislative credentials and gathered connections. Reed sponsored or co-sponsored a variety of legislation, ranging from support for national community service to gun law reforms.[3] Soon Reed had built enough of his credentials to be seen as a viable candidate for the Senate. His chance came in 1996 when the famous Claiborne Pell, the sponsor of the college tuition assistance program named after him, decided to retire after 36 years in the Senate. Reed easily took the seat against his opponent - Republican Nancy Mayer - with 63% of the vote.[4]

During his tenure in the U.S. Senate, Reed has amassed respect among his peers and his constituency as a capable and dependable statesman. Serving on the Senate Armed Services Committee, the Senate Appropriations Committee, and the Senate Banking, Housing, and Urban Affairs Committee, Reed has worked to create a legislative agenda that represents the core values of the Democratic Party. As a member of the Appropriations Committee, Jack Reed is able to steer federal funding to his state.  As a senior member on the Senate Armed Services Committee, Reed is also able to exert influence on military spending and be an advocate for the defense industry that is a crucial part of his state’s workforce. This influence can be seen in his advocacy for the building of new submarines at Quonset Point in Rhode Island that eventually led to the creation of 400 new jobs for the community.[5] More broadly, Reed’s legislative record shows a commitment to social issues, including unemployment insurance and education.[6]

Senator Reed is regarded as a strongly loyal member of his party: Reed has voted on major issues in line with his party 96% of the time.[7]  His legislative activities signal his allegiance to the party, but also overwhelmingly show his constituency that he is working for their benefit. According to a recent poll, Jack Reed holds a 55% approval rating among Rhode Island voters.[8]  For his 2014 campaign, he has raised $3.4 million and he has a Republican challenger that is not considered strong;[9] his seat was considered to be among the safest in the nation in the 2014 midterm Senate elections.  Indeed, he won his reelection bid with nearly 71% of the vote.

In the late 19th and early 20th century, the U.S. Senate was dominated by the presence of another Rhode Islander - Nelson Wilmarth Aldrich.  As the leader of his party in the Senate, Aldrich had considerable influence and is remembered as a pivotal figure during his tenure.  Similar to Reed, Aldrich came from a working class family. His father was a mechanic and worked the mills in the countryside of Rhode Island.[10] As with Jack Reed, Aldrich was thought to be very bright and ambitious. Aldrich briefly served as Union soldier, tasked with guarding Washington D.C. before being sent home due to sickness. Working his way up as a store clerk in a grocery firm, Aldrich eventually became a successful businessman. He soon established himself as a respectable and leading figure in Providence. His position and credentials eventually caught the eye of the local Republican Party machine in Providence, and Aldrich was tapped to become a member of the local city council in 1871. His ability to persuade opponents and his strong work ethic propelled his status as a politician and he quickly moved up the ranks of the party, becoming president of the city council in 1873. The year after that, Aldrich easily won a seat in the state Senate with the support of the Republican Party machine. Then in 1878 and in 1880, Aldrich was elected into the US House of Representatives for two terms. In 1881, the death of Senator Ambrose Burnside gave Aldrich the opportunity he needed to win election to the U.S. Senate. With the help of Republican Party boss and incumbent U.S. Senator Henry B. Anthony, Aldrich won the majority of votes in the state legislature in a special election to fill the seat in 1881.[11] See https://repository.library.brown.edu/studio/collections/id_642/?limits=+ir_collection_id%3A%22642%22+mods_hierarchical_geographic_state_ssim%3A%22Rhod... for the actual ballots in the Rhode Island Senate elections.

As a U.S. Senator, Aldrich was known for his ability to persuade opponents and to negotiate legislation; he became one of the informal Republican Party leaders of the Senate and he served as chairman of the powerful Senate Finance Committee.  Aldrich’s field of expertise revolved primarily around the economy, notably tariff policy. Particularly during this era, the economy was an important issue for the United States, and Rhode Island was a major manufacturing state. Economic reform was at the forefront of American politics, in particular the debate concerning protective tariffs, the role of greenbacks, and the contentious issue of gold versus silver standards. During his term in office, Senator Aldrich was known for his protectionist attitude towards the economy. Regarded as an expert on financial matters, Aldrich was instrumental in implementing many different policies aimed at reforming the economy, from the “McKinley” Tariff Act of 1890 to the Payne-Aldrich Tariff Act of 1909.  A strong proponent of tariffs, Aldrich summarized his position on tariffs in a speech in 1892 stating that, “The Republicans enter the campaign distinctively favoring the continuance of the protective policy, and announcing definitely the principles which should control tariff legislation….”[12] As the chairman of the Senate Finance Committee, Senator Aldrich was the main force in providing a plan that allowed for flexible cash reserves in case of banking failures. This plan laid the foundation for the Federal Reserve System.[13] Because of his efforts in reorganizing the finances of the nation, Aldrich was seen as the inside man for “Big Business.” He had close ties to manufacturing, the Sugar Trust, and railroads to name a few; he got very wealthy from business ties that he cultivated while he was in the Senate.  His daughter Abby Aldrich married John D. Rockefeller, Jr. and together they produced a family that included Nelson Aldrich Rockefeller, governor of New York and vice president, and in the next generation, Senator John D. Rockefeller IV of West Virginia, who was governor for eight years, and is retiring in 2014 after thirty years in the Senate.

Senators Aldrich and Reed, though from different eras and elected via different electoral systems, share some common elements to their career success.  Both Aldrich and Reed can be described as political entrepreneurs who built networks among local party leaders, business leaders, and constituents and subsequently translated that support into high profile national political careers.  They had similar career pathways from the state legislature, to the House of Representatives, to the U.S. Senate.  Once in the Senate, Aldrich and Reed worked to establish themselves by building relationships among their party colleagues while maintaining reputations for being attentive to state concerns.  Nelson Aldrich, as leader of the Republican caucus, assured that the legislative agenda and actions of the Senate served to accomplish the goals of the Republican Party while advocating for corporate business interests.  Jack Reed built a career in areas such as defense, education, and banking reform that were especially important to his state and to the Democratic Party.

However, for Reed it has been far more imperative to establish a good reputation among the voters of Rhode Island since they have the option of voting directly for or against him.  Reed has remained loyal to the state and national party, but does not depend solely on the party organization for reelection.  Aldrich, on the other hand, served in the age of indirect election with high turnover in the membership of the state legislature.  As such, he needed the Republican machine to sustain his electoral bids, and when factionalism broke out among Republicans towards the end of his career, it was harder to keep a stranglehold on his power base in the state.  Aside from this main difference, these U.S. Senators - separated by nearly a century - approached career building and re-election in similar ways. Their careers are characterized, in the past and present, by working up through the ranks of the state political apparatus in their respective parties, and forging a record that signaled allegiance to their party, key local and national economic interests,  and their home state more generally.