What is an herbarium?

Originally, the word herbarium referred to books about medicinal plants but around 1700, the French botanist Joseph Pitton de Tournefort used the word to describe a collection of dried plants. Linnaeus continued this usage and it came to supersede earlier terms such as hortus siccus (literally ‘dry garden’). In the early days of plant collecting, herbarium collections were often bound in volumes rather than being filed as separate sheets as is done today. Historically, herbaria were also mostly private but over time botanists started to deposit specimens into established, publically available collections. (Information from ‘The Herbarium Handbook, 3rd edition, 1999, D. Bridson and L. Forman, Editors). 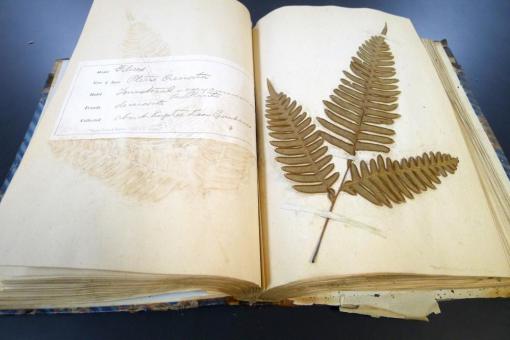 Bound herbarium of ferns and mosses collected in Assam by J. C. Simons

Collections around the world

The value of herbarium collections

Traditionally, the primary importance of herbarium specimens was related to questions of taxomony, the science that includes identification, nomenclature, and classification of objects. Ideally, this would be done through the study of live plants but, when this is not practical, referring to a collection of preserved plants is important. Beyond their customary value to taxonomy, herbarium collections have become crucial for a wide array of studies including such things as reconstruction of plant phylogeny, the spread and habitat preferences of invasive species, population trends of rare plants, identifying priority sites for conservation, pollination ecology, education, forensic studies, ethnobotanical studies, and phenology studies to name a few.

As with many herbaria, the Brown collections have been built up by many botanists working close to home and in far flung places. However, Brown’s herbarium is not  simply a relic of the past: the  plants it houses are critical to scientists’ current understanding of our planet and the life it supports. The herbarium at Brown enables scientists—both locally and globally—to visit, explore, study, and add to the collections, increasing scientific collaboration and knowledge.

By providing information about past plant life, the Brown herbarium enables scientists—in botany and other areas—to better understand the present, and to prepare for the future. Historical plant collections are of great value to studies of global climate change, invasive species, and endangered or extinct plant occurrences. For example, a 1993 report by the Rhode Island Natural Heritage Program listed 200 historic occurrences of 80 plant species in the state—most extinct locally—known only from Brown’s herbarium collection. Historical herbarium specimens are also an important source of DNA from rare or extinct species and from multiple populations for genetic and evolutionary studies.

In addition to the historic value of Brown’s herbarium, ongoing collection efforts are also vital because they ensure a continuous record of species distributions and provide new material for all aspects of botanical research. The goal of a regional herbarium such as Brown’s is to house representative specimens of all species in the area. For Brown, this means focusing primarily on Rhode Island and, more broadly, New England. The collections should be an important resource for researchers, students, local botanists, and interested members of the general public. Beyond this primary focus, Brown’s herbarium will continue to add specimens from around the world and to build on the historical legacy left by past researchers.

As with any herbarium, the collections at Brown consist of dried and pressed specimens mounted on sheets of archival paper. Each specimen has a label that includes important information about the specimens identity and also where, when, and by whom it was collected. 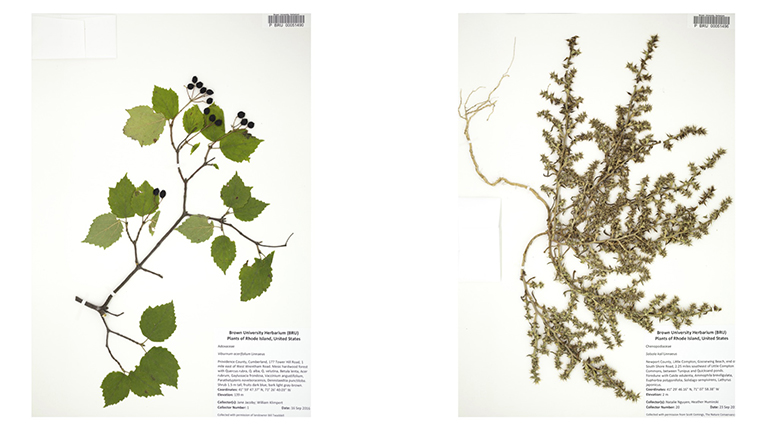 The herbarium is comparable to a  library of preserved plants with the specimens and labels providing all the information. In fact, the label and specimen are equally important. The specimen provides information about the species’ morphology while the label offers taxonomic and locality information.

Herbaria document the world’s flora and provide a constant and permanent record of botanical diversity. This role is increasingly important as the rate of habitat destruction increases and climate change precipitates rapid changes in species’ ranges and all aspects of their ecology.