In 2001 Brown University and Jimma University established a long-term collaborative research and training partnership focused on adolescent reproductive health with the support of the David and Lucile Packard Foundation. Over the years additional support has come from the National Institutes of Health, the National Science Foundation, the Mellon Foundation, and the Compton Foundation. The center piece of the Brown-Jimma collaboration is the Jimma Longitudinal Family Survey of Youth (JLFSY). The survey followed a sample of youth (ages 13-17 at the start) for seven years to track changes in knowledge, attitudes, behavior and the occurrence of key early life course events and transitions. The study was designed to identify factors associated with risky behaviors and undesirable outcomes such as smoking, drinking, dropping out of school, and unprotected premarital sex; and identify key supportive features of families and communities that are associated with positive early life course outcomes.

The Jimma Longitudinal Family Survey of Youth (JLFSY) is representative of the regional city of Jimma (pop. 120,000), three nearby market towns, and the rural communities adjacent to the market towns. Baseline surveys were completed with 3,695 randomly sampled households and 2084 randomly sampled youth in 2005-2006. A second round survey of households was completed in 2008-2009, and second, third and fourth round surveys were completed with the youth in 2006-2007, 2009-2010 and 2012-2014 respectively. Household data were collected from the household head or the spouse of the head. Adolescents were directly interviewed apart from their parents or other adults. 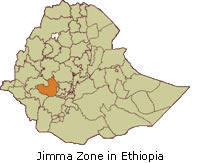