Mausoleum
Archaeologies of the Greek Past

It is named after King Mausolus who, with his Queen Artimisia, reigned over Halicarnassus and surrounding territory from 377 BCE till he died in 353 BCE. The tomb was not complete until 340 BCE.

As a tribute to the King, Queen Artimisia committed to building her king an extravagant tomb. This monument was described by two different accounts. The common features of the building between the two accounts were a colonnade of thirty six ionic columns, possibly a base of stepped pyramids. It is topped by a four-horsed chariot. According to Biers, the building was 45.11 meters high, the base was 38.15 meters high and 38.40 meters wide. It was destroyed by an earthquake in the 13th century AD, and then plundered by the Knights of St. John. It was excavated in 1856 AD where they found many valuable sculptures. It is suspected that the leading artists were called to work on the Mausoleum. 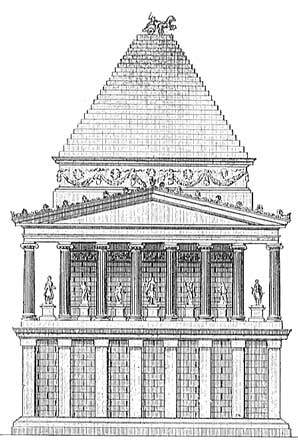 Since King Mausolus’s tomb, similar structures have taken the name of Mausoleum.