Temple of Apollo at Didyma
Archaeologies of the Greek Past

The Temple of Apollo at Didyma

This is arguably the the most noted for temple architecture of Hellenistic period. Construction for this building began around 300 BCE and continued till the second century but was never completed. It was in the classical city of Miletus.

It measured 109.38 meters by 51.14 meters, making this a massive temple structure. The cella was surrounded by 120 columns, 19.70 meters high, and in two rows. Ten columns were on the sides and twenty one in the front. The roof of the cella was open. There was a small tetrastyle in the cella along with a shrine for the cult statue of Apollo.

The open court was surrounded by planted trees and had an oracular spring which was supposedly the original place of the oracle. A priestess would sit atop the spring and give seekers their respective oracle. The room of the oracle was on the second floor, led by a staircase of 24 steps. This room was in a rectangular shape whose ceiling was supported by two Corinthian columns. There was also a stairway leading to the roof.

It was the abundant ornamentation within the building that defined this temple as distinctly Hellenistic. 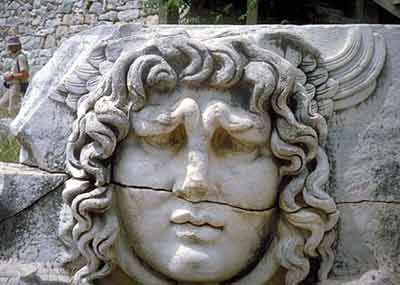