Objectivity vs. Subjectivity, and Walking the Line Between Them
13 Things

One particular dualism that is prevalent in today's socio-cultural theory is that of objectivity and subjectivity. Objectivity is a theoretical perspective that is omniscient, neutral, and detatched with respect to a certain attribute or set of attributes. The objective courtroom judge has no reason to favor the defendant or the plaintiff, and the objective journalist includes no judgmental inclination in reporting an event. Subjectivity, on the other hand, is the opposite condition, of being located within one's personal feelings and opinions. An editorial writer is subjective by definition, to juxtapose the earlier example of the journalist.

The situated nature of perception, i.e. its subjectivity or objectivity, is an extremely important qualifier of the human experience. It is in fact one of the most widely recognized and researched fields of psychological inquiry, particularly in light of Jaques Lacan's theory of "the mirror stage." In this developmental period, Lacan claims, an individual reconciles the tension of having a projected image in a mirror that is separate from the experienced phsical self. Eventually, the individual recognizes the singular body, in the presence of a mirror, as simultaneously subject and object. Although this stage marks the first time that a person ever confronts this perceptual dualism, it is a tension that remains throughout the person's entire life (Wikipedia: Jaques Lacan). 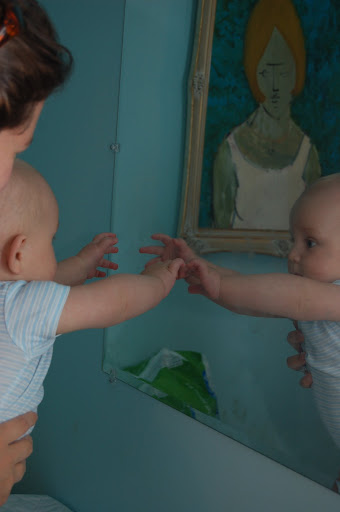 One of the shortcomings of Cash's (1990) account of the relationship between body physicality and body image is his sharp analytical division of objectivity and subjectivity, whereby he essentially dismisses their simultaneous effects on body perception. He argues that the experience of body image can be "neatly divided" into the two separate perspectives of objectivity and subjectivity, or a "view from the outside" vs. a "view from the inside" (p. 51). This is a reductionist analysis, because the two are inseparable. The view from the inside is deeply affected by the way that people perceive others to view them, and vice versa. Furthermore, it is clearly impossible for anyone to ever attain a completely insulated objective or subjective view, because nobody can escape their own perception and nobody can exist without receiving social cues, affirmations, and denunciations from others.

I propose that the experience of body image is inter-subjective, that is, deriving from the interaction between a subject and the perceived reactions and judgments of other socially relevent subjects and texts. Thus a mirror does not actually allow one to objectify one's body, but rather assume an inter-subjective orientation so as to play the role of a different subject, and effectively view one's body from the perspective of another. This "different subject" is directly related to the idea of the prison guard in the panopticon's central tower.

In situating oneself as an intersubjective person, a crucial influence is the context of action; there are locations and environments that are requisite stages for us to engage in our various activities and roles in the world. It is not very meaningful to envision ourselves doing anything without also envisioning our circumstantial context as well. Goffman breaks down this context into what he calls the "setting" and the "personal front" (Goffman 22-24). The setting includes furniture, physical layout, decor, or any other site-specific topological entities. On the other hand, there is the more personalized physicality of the personal front, which includes adaptable equipment used to express relationships and status with respect to other people and institutions. The personal front would include clothing, image attributes like weight or age, gender, posture, and speech dialect. It is this second subset of context that is of interest for this study, since mirrors are a tool for visualizing and realizing the personal front.

The personal front is an essential tool for impression management. When we interact with others, we judge and categorize one another according to information gathered from the interaction. It is therefore often in a person's interest to project a certain impression, since that impression will influence the responses of others (Goffman 3). While body image and body affectations are not the only way that people do this, they play a major role. A person looking for an office job would want to seem hygienic and socially competent during an interview, which might physically mean wearing nice clean clothes, being clean-cut, or consciously keeping body language competent and smooth. The important concept in this scenario is that the interviewee is able to use a mirror to project his or her body image, assume the role of the interviewer, and anticipate which components of the personal front will be well-received.

DISCLAIMER: I want to be very clear that my argument on intersubjectivity is *not* a blanket diagnosis of social conformity. It is not that people always replicate others or act so as to "fit in," although this does occur on a vast scale. Rather, human behaviors (specifically those regarding body image and personal fronts) must be situated within a given society, so body actions and physical affectations must inevitably be informed by the various categories and typologies of that society. Different societies also attach different meanings to bodies and images, so there is a great deal of variety in the scale and the scope of body image management according to the regional context.

Back to the mirror project page