Introduction: What is a Football?
13 Things

What is a football? This question may be more complex than one might think. After all, the football is used in every corner of the globe; it can be found as a $200 synthetic object on the well-maintained astro-turf fields of Ivy League universities or as a ball of rags on the streets of Sao Paolo. Even a crumpled up piece of paper can be called a football when kicked - the football can be anything, anytime, anywhere. The interactions between these balls and feet are clearly similar but also incredibly different. Thus, when discussing the interaction between a football and foot, what should we think of? Is there some 'ideal' concept of the foot to ball interaction? Is there a Platonic ideal of a football?

Perhaps the world authorities can point us in the right direction. The 'Fédération Internationale de Football Association', commonly known as 'FIFA', is world football's governing body, providing regulations, rules, and a social infrastructure for how the game is organized and played. According to FIFA, the ball is:

These five brief points set out in Law 2 of FIFA's Laws of the Game 1 define the modern football. They are surprisingly concise given how highly technological and over-specified today's professional sports are. Thus, we are left looking for an alternative answer.

Most people would consider the football one of the simplest objects in the world; a soft and somewhat elastic sphere designed to be kicked with the feet. But has this always been the case? A closer look reveals that this seemingly straightforward object has a long history of evolution and, perhaps more interestingly, a whole range of variations even in its modern form.

It's impossible to pin down the exact origin of the football, although there is agreement among scholars that, as current FIFA president Sepp Blatter has said, "football is as old as the world... people have always played some form of football, from its very basic form of kicking a ball around to the game it is today."2 Some scholars suggest that a version may have even played in ancient Rome. This sport, known as harpastum, is now thought to be more akin to Rugby than modern day football, but it is written that balls were kicked as a part of the game. A similar sport may also have been played in ancient China3. In terms of a more recent account of what we think of as football today, ample information exists about the materials and construction of the balls used around the time that the modern sport of Association football (now commonly known as just 'football' or 'soccer') was invented. But the fact that this particular set of rules gained such widespread popularity speaks to the essential simplicity and appeal of the game.

This simplicity, which has been retained even in the modern ball, makes it especially apparent that the football was not invented for the sport, but rather the sport grew up around the ball. However, when so many versions are played, and have been played, we are constantly presented with the vital question of what, exactly, constitutes a football. What is a 'true' football and what should only be considered a makeshift copy? These questions are critical for any object that has many different variants existing in many different sets of relationships across time and space. In the case of the football, there are several different ways to approach the search for the true nature of the object.

The history of football manufacture may provide us the greatest clue as to the 'true' nature of the football. Over time, as expertise in the craftsmanship of leather and manufacture of synthetics progressed, footballs became rounder, more uniform, lighter and more elastic. Because the requirements for these qualities aren't fully spelled out anywhere, they point to a sort of ideal that has been implicitly defined by the preferences of footballers.

Though early leather balls were relatively heavy and hard, this has been rejected for the greater comfort, control and speed offered by lighter, softer balls. Smoothness and uniform shape obviously give the football more predictable flight characteristics and balance, therefore providing greater accuracy. In a game that is all about precision in shooting and passing, this is essential, especially for players at the elite level.

However, recent developments in the technology and marketing of football equipment have taken this to a whole new level. Somewhat paradoxically, the football is becoming increasingly technologically complex in pursuit of its ideal form and function. Adidas, the official provider of balls for the World Cup and most other major international football competitions, has designs that boast an arsenal of high-tech features. But if we trace the technological history of more recent footballs, we see an unmistakable trend emerge: they all boast superior spherical qualities. It seems that footballs are attempting to evolve towards the idea of a perfect sphere. Adidas' balls are advertised as perfectly round and balanced, with an internal structure that distributes impact energy evenly and surface panels that are bonded rather than stitched for a smoother surface. The outer panel material itself is specially textured to allow the ball to fly and spin faster and grip better, but more than anything else to distribute force evenly so as not to harm the spherical shape. It seems thus that the ideal football is one that is perfectly round - a flawless sphere. 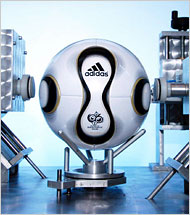 But there are more characteristics to be considered. Recent incremental developments in football design over the last century have undoubtedly affected how the game is played. In fact, the engineering of the football to deliberately influence how it is used by footballers is a recent phenomenon and one that raises serious questions about the object's relation to the sport it is a part of. While the football has traditionally been considered a passive object to be kicked, it has now become a very active agent, endowed with characteristics such as accuracy and speed that are built into the ball, not provided by the person kicking it.

These incremental changes are changing how the game is played, sometimes with negative consequences. While Adidas and other ball manufacturers would likely say that the modern football is simply a more advanced tool with which players can display their skill, many prominent professional goalkeepers have criticized how the movement of the ball gives their opponents significant advantages they never had before. By imparting spin on the ball when kicking it, footballers have always been able to achieve a degree of "swerve" in the ball's flight path, and this is an ability that has a vital role in typical play. But when goalkeepers complain that the ball swerves in new ways4, and thereby allows their opponents to score on them without intending the ball to move as it does, there is reason to see this as a movement away from the 'ideal' football, which should remain passive, however finely balanced and sculpted it is.

As we have seen, the evolution of football design gives us some clues to the nature of the 'ideal' football, if such a thing exists. However, as the manufacturing industry grapples with issues regarding the size, weight, and texture of the football, it is clear that is a debate that will continue. Although we like to think of the ideal ball as round, it is vital to remember that across the developing world, but especially in Africa and South America, any group of children playing in the street are likely to be kicking a round object back and forth between two roughly designated goals. Anyone would recognize this game as football, just as they would a televised match between two uniformed teams of professionals in front of a crowd of tens of thousands. And whether the object those children are kicking is a knot of rags, an inflated animal bladder or a beat-up rubber ball, it is hard to deny that it is, at least in this situation, as much a football as the shiny synthetic orb rolling across the stadium's flawless grass. And, as we shall see next, football as a sport is not entirely defined by the ball itself; rather, it is defined by the effect that ball has on the players' feet, their perception of space, and the interactions between other players on the field.

Next: Part I: 'And With These Feet' - Physical Interaction with the Ball and Spacial Perception

Back to The Football