Tiryns
Archaeologies of the Greek Past

Tiryns is a site in the Argolid, the remains of which are most associated with the late Bronze Age, when the site was built up as a citadel and stood as one of the major centers of the Mycenaean culture. Modern conceptions of Tyrins put it at its height from the 14th century to the decline of Mycenaean culture generally with destructions dated around 1190. Mythologically speaking, Tiryns is regarded as the birthplace of Heracles. 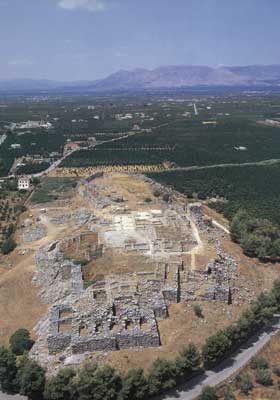 Tiryns demonstrates use of many of the same features associated with Mycenae. The most distinctive feature are its impressive fortification walls, which are over 10m thick in some cases. The walls are, in fact, so large as to include internal galleries, held up by corbel vaulting. Specifically, the walls are a revered example of cyclopean masonry, and the entry on that subject deals with them in more detail.

The Palace at Tiryns, within the heavily fortified upper citadel, is better preserved than its counterpart at Mycenae. The structure contained two separate megara, a larger more central one and a smaller example off to the side. The walls of the palace are thought to have been highly decorated, given significant finds of frescoes that have now been restored. The subjects depicted in these frescoes such as scenes of figures in chariots and of hunting, are generally thought to thematically separate these very Mycenaean examples from Minoan ones.

As one of the best known and preserved sites of the Late Helladic, Tiryns was designated a UNESCO World Heritage Site in 1999.