Each academic year, the department holds two endowed lectures: the John Howard Appleton Lecture and the Leallyn Burr Clapp Lecture. Each lecture features a dinner to which faculty, senior graduate students, and senior undergraduate concentrators are invited. Appleton and Clapp lecturers are highly regarded and represent a span of chemical fields. Past lecturers have won Nobel prizes, developed novel theories and methods in the sciences, and designed new instrumentation.

This endowed lecture was established in 1922 and named in honor of Professor John Appleton. The Appleton lecturer presents one seminar appropriate to the general public and a second seminar appropriate for a scientific audience. This year, on the 100th Anniversary of the Appleton Lecture endowment,  Daniel M. Neumark,  Melvin Calvin Distinguished Professor of Chemistry, University of California, Berkeley will present "Chemistry Under the Arrow". 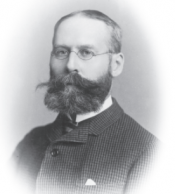 John Howard Appleton (1844-1930), or 'Johnny App' as he was affectionately known, was associated with Brown and the Chemistry Department in a variety of capacities for many years. He received his Ph.D. from Brown in 1863 as well as honorary A.M. in 1869 and honorary Sc.D. 1900.  He held appointments as Instructor (1863-68), Professor of Chemistry Applied to the Arts (1868-72), and as the inaugural Newport Rogers Professor from 1872 until his retirement in 1914.  An excellent scholar and teacher, he authored 12 books on various aspects of chemistry.  The Appleton lectureship was endowed to the Brown University Chemistry Department in 1922 by the friends and family of Professor Appleton.

This endowed lecture was established in 1990 in memory of Professor Leallyn Clapp. The program consists of an annual lecture or workshop on issues of current scientific or educational interest. The 2022 Clapp Lecturer is Christopher "Kit" Cummins, Henry Dreyfus Professor of Chemistry, Massachusetts Institute of Technology. The 2022 Clapp Lecture "New Chemistry for Phosphorus Sustainability" abstract can be found here. 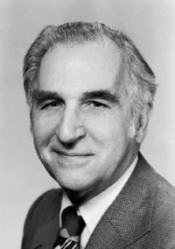 Leallyn Burr Clapp (1913-1988) was a professor of chemistry at Brown University from 1941 until his retirement in 1982, although he continued to teach during his emeritus years.  A native of Illinois, he obtained his undergraduate education at Eastern Illinois State Teachers College followed by graduate degrees at the University of Illinois in Urbana-Champaign (MA 1939; Ph.D. 1941) while carrying out research with John C. Bailar.  Lee Clapp's first love was chemical education, and this is reflected in the many awards and honors he received over the years, including the Manufacturing Chemists Award in Chemical Education (1973), and the American Chemical Society Award in Chemical Education (1974).  He pioneered educational reforms in the teaching of chemistry at both the high school and college levels, and was extremely active in promoting these reforms in his capacities as Chairman of the ACS Division of Chemical Education, Director of the Chemical Bond Approach Project for the teaching of chemistry, and President of the New England Association of Chemistry Teachers. In 1990, the Clapp Lecture/Symposium series was initiated in his honor.

A few pictures from this year's reception. 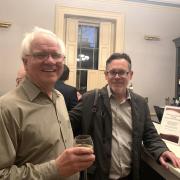 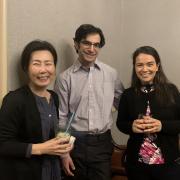 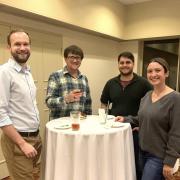 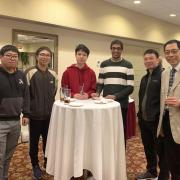