With a new grant from NASA, Brown physicist Gregory Tucker and a team of students will help to build a telescope that can study the atmospheres of distant planets.

A Brown University professor and his students will play key roles in building and operating a new telescope designed to unlock the secrets of planets orbiting distant stars.

Gregory Tucker, a professor of physics, received a $2.5 million grant from NASA to build components for the Exoplanet Climate Infrared TElescope (EXCITE). The instrument, which is designed to fly suspended from a high-altitude balloon, combines a powerful telescope with a spectrometer capable of probing the atmospheric characteristics of exoplanets. In particular, EXCITE will study hot Jupiters, planets that are about the size of the largest denizen of the Earth’s solar system but orbit surprisingly close to their host stars.

“When people were first searching for exoplanets, nobody expected hot Jupiters to exist because it’s not clear how they would form,” Tucker said. “But they turn out to be quite common, and because of their size we can measure the properties of their atmospheres and get an understanding of their atmospheric dynamics.”

The EXCITE instrument is designed specifically to do just that. The project is led by Peter Nagler, a researcher at NASA’s Goddard Space Flight Center who helped to develop the idea for the instrument while a Ph.D. student at Brown working with Tucker. 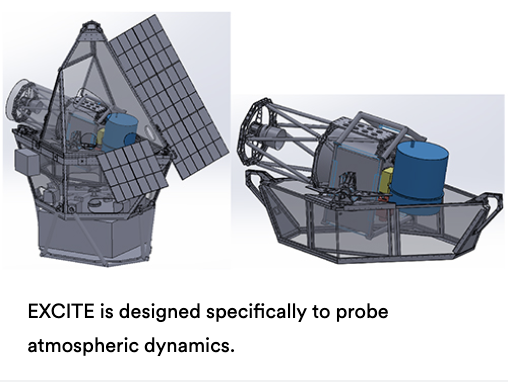 Tucker says that EXCITE will have some distinct advantages over space telescopes and other large-scale instruments when it comes to studying atmospheres. Observation time on space telescopes is precious, meaning they generally take relatively quick looks at lots of different targets. EXCITE, on the other hand, will be able to stare at individual planets for days at a time as they orbit their host stars.

Hot Jupiters have short orbital periods of less than 10 days, which means EXCITE can gather continuous data from a planet throughout its orbital cycle. That can provide detailed information about the composition of an atmosphere as well as to track key dynamics driven by temperature and pressure.

For example, Tucker says that EXCITE could potentially determine wind speeds on a planet by studying its substellar point — the spot closest to a host star.

“You’d expect this closest point to be the hottest spot on the planet because it’s constantly heated by the star, but in fact we tend to see a small eastward shift,” Tucker said. “That’s because the atmosphere is redistributing that heat, and we can use that shift to determine wind speed.”

To get these kinds of observations, EXCITE will fly 25 miles up in the skies above Antarctica. That altitude removes interference from much of the Earth’s atmosphere, which over Antarctica is already clear, dry and optimal for telescope viewing. To reach that altitude, the SUV-sized EXCITE instrument will be tethered to a balloon about the size of a football stadium when fully inflated.

Among the components to be developed at Brown is a cryogenic system for the instrument’s spectrometer. Interference generated by the optics inside the spectrometer itself could obscure the signals that the researchers are trying to detect. By cooling the optics down, the team can minimize that interference.

“We’re basically putting it in a big Thermos bottle with a mechanical cooler,” Tucker said.

Tucker’s team will also help with integration and assembly of the full instrument. When EXCITE is ready to fly, Tucker and his students will provide flight support and aid in data analysis. The team hopes to start building components next year and begin flights sometime in the next few years.

Ultimately, Tucker hopes that EXCITE will provide data on exoplanet atmospheres that other instruments can’t capture — information that could help scientists better understand how solar systems form and evolve. And the technical insights provided by EXCITE could push the study of exoplanet atmospheres forward even further.

“Eventually we’d like to be able to study the atmospheres of smaller Earth-size exoplanets, but the technology isn’t quite there yet,” Tucker said. “I think this could be a good path to getting toward the study of these more Earth-size planets.”