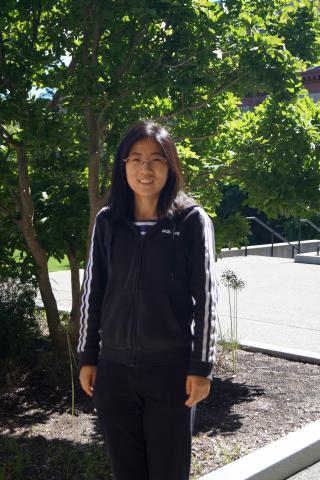 Every academic year Brown Physics awards the Galkin Foundation Fellowship to one outstanding senior graduate student in the Department of Physics. The Galkin Foundation Fellowship is made possible by the generosity of Warren Galkin (’51), a Rhode Island native who received an Sc.B. in Physics at Brown. This year’s Fellowship recipient, Rong Cong, impressed those who attended her virtual presentation, “Structural and magnetic properties of 5d double perovskites probed by nuclear magnetic resonance.” Cong’s Fellowship project was supervised by Brown Professor of Physics Vesna Mitrovic who noted that her colleagues joked afterward that Cong’s presentation “resembled a defense of three separate Ph.D. theses, two in experimental physics, and one in theoretical physics.”

According to Cong, receiving the Fellowship offered, “encouragement for me to continue doing my research.” She adds, “I feel honored to have this award and it will definitely stimulate me to work harder on the research that I am doing.” She describes the research as “using  NMR [Nuclear Magnetic Resonance spectroscopy] technique to study the magnetic and structural properties of  quantum magnets with strong spin-orbit-coupling.” Cong describes these materials as having, “electron correlation with strong spin-orbit coupling. Theory has indicated that there are multipolar spin interactions in these 5d compounds which are more often seen for f-electron system. We used NMR as a probe to study them.”

NMR spectroscopy is a spectroscopic technique that is used to observe the magnetic fields around atomic nuclei. It’s a powerful tool that can give access to the structure of a molecule and its electronic signature, and is considered the definitive method for identifying organic compounds in modern organic chemistry. It is also useful in determining the spin properties of sub-atomic particles.

Cong notes that the magnetic materials she was studying are particularly interesting because  “currently, the complex interplay among spin, orbital and charge degrees of freedom has been a prime focus of strongly correlated materials research and the spin-orbital-lattice entangled states presents difficulty both in understanding it experimentally and describing it theoretically,” which is the reason she needed to approach the project from both an experimental and computational perspective.

Work had already begun on the project when Cong joined Mitrovic’s lab, “I continued research on these 5d1 to 5d2 magnetic Mott insulators based on work done by earlier graduate students.” Cong found Mitrovic helpful and easy to work with for the project, “[she] has a very flexible style. We [lab members] have a lot of freedom to explore in terms of the projects we want to do. I could reach out to her whenever I have any questions or concerns. She has been very helpful in connecting me with other collaborators.”

Cong approached the problem by carrying out a first principles calculation and determining the orthorhombic local distortion for the “breaking local point symmetry” phase on the single crystal Ba2NaOsO6. She observed a two-sublattice orbital ordering coexisting with canted ferromagnetic ordering. For the 5d1 to 5d2 doped compounds Ba2Na(1-x)CaOsO6, she constructed a phase diagram of magnetic and structural transitions as a function of doping using NMR and muon spin relaxation. The powder spectrum simulation indicated orthorhombic electric field gradient symmetry for these doped compounds.

Despite the constraints of the pandemic and limited opportunities for direct interaction with collaborators, Cong had a long thank you list beyond Professor Mitrovic including, Erick Garcia, Brenda Rubenstein, Ravindra Nanguneri, Kemp Plumb, and Tsung-Han Yang at Brown University, Samuele Sanna, and Paola Caterina Forino at the University of Bologna, Arneil Reyes, Sanath Kumar Ramakrishna at The National High Magnetic Field Laboratory (MagLab) at Florida State University, and Nandini Trivedi, and Wenjuan Zhang at The Ohio State University.

Brown Physics remains deeply grateful to Warren Galkin (‘51) for his generosity in supporting cutting-edge physics research. Said Department Chair Gang Xiao, “Warren Galkin’s donations to the Physics Department have supported more than 20 Ph.D. students, many of them highly successful in their professional careers. We are grateful to Warren for his generosity and strong support of STEM programs.” Xiao added, “Because of the Galkin Fellowship, Cong was empowered to develop an insightful understanding of a new class of quantum materials. Her achievement exemplifies the excellence of our graduate students and their dedication to cutting-edge research.”