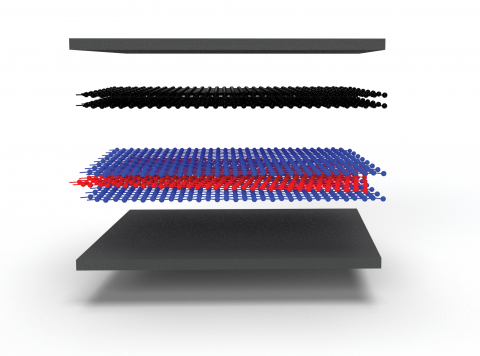 This screening technique was first reported by the same group of physicists at Brown in 2021. Xiaoxue Liu, a postdoc researcher at Brown, is the lead author of both reports. She pioneered the effort in studying graphene moiré systems using 2D material structures with complex design. The screening measurement in twisted trilayer graphene shows similar results compared to the same measurement performed on magic-angle graphene bilayer, which suggests that superconducting phases in these two systems have a common origin.

Apart from screening measurement, the study also provided the first characterization of thermodynamic properties of twisted trilayer graphene. This is achieved by studying the chemical potential of three graphene layers.

“Studying thermodynamic properties of electrons in the graphene moiré structure is a crucial step towards a better understanding of the energy band structure and the associated superconducting phase,” said Naiyuan James Zhang, a Ph.D. student in the Physics department at Brown. “We are able to characterize the spin polarization of the fermi surface by applying a large external magnetic field aligned inside the 2D plane of the graphene layers”.

With this research, Li and his team hope to learn more about the mechanism behind exotic superconductive phases in the 2D limit. Following this most recent publication, the team plans to explore the impact of the misalignment between graphene sheets on the superconducting phase. The goal is to discover new material properties, which might introduce novel device functionalities.