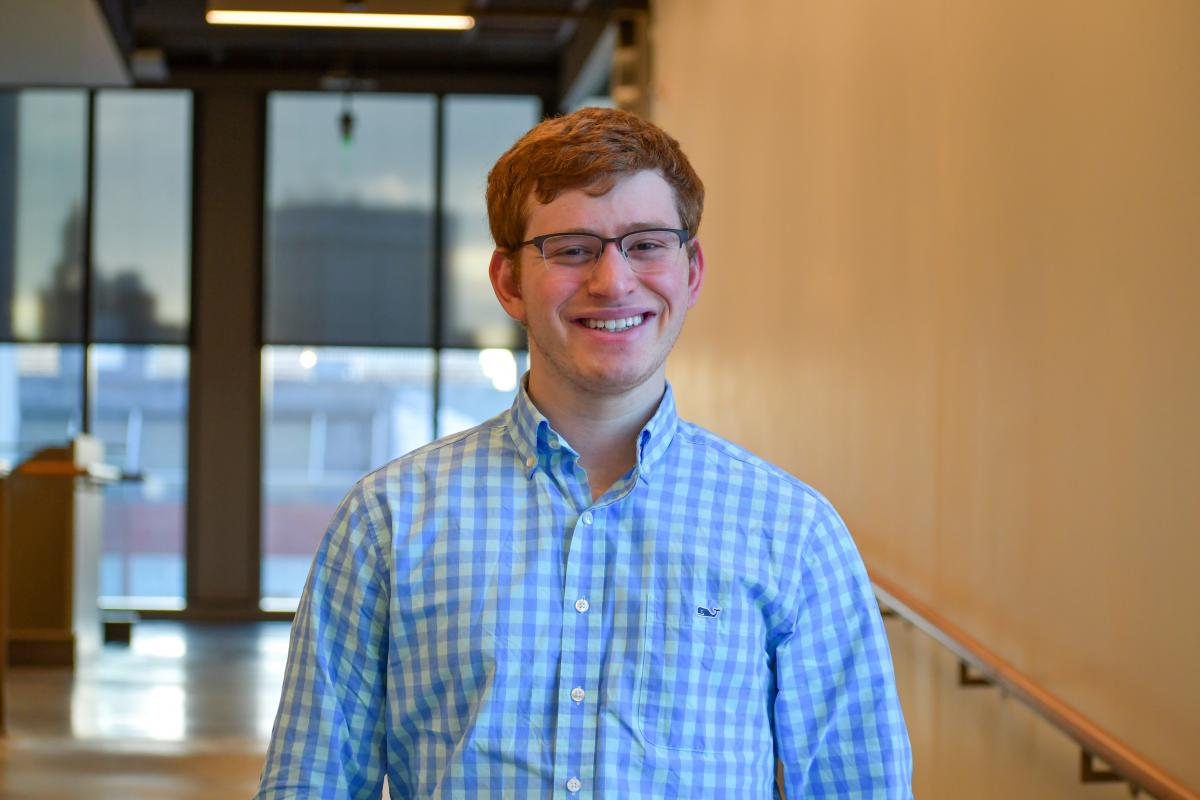 Tell us a bit about yourself/interests/hobbies etc. :

My hobbies and interests generally fall into two broad camps: the artistic and the logical. I love the theater and the symbolic meaning that comes with certain plays, I appreciate the beauty in art, and I like all kinds of music. I play five instruments (oboe, trumpet, alto saxophone, clarinet, flute) and am a member of the Brown University Wind Symphony and the Brown University Band. On the logical-mathematical side, I love playing and studying chess and following baseball; I run a fantasy baseball league with a group of friends which requires studying a lot of statistics and making predictions about athletes’ future performances. I also love doing jigsaw puzzles, which I guess taps into both the artistic and the logical parts of my brain.

Why did you choose to concentrate in Physics?

I had a few very influential teachers at Scarsdale High School who helped me discover my love for physics. They taught me enough to interest me in the mysteries of the universe and piqued my intellectual curiosity to learn more. My high school chemistry teacher Nelson DaSilva was particularly inspirational; in his class unit on atomic models, I vividly remember him saying, “You have no idea how weird it gets” at atomic and subatomic scales. Of course, at that grade level, I didn’t yet have the necessary background to rigorously study the subatomic realm in a classroom setting, but I eagerly sought to learn as much about it as possible on the internet. I started watching documentaries about quantum mechanics and relativity that made a very deep impression on me -- how remarkably strange yet beautiful the world around us is! I eagerly began to read books and watch online presentations by contemporary physicists such as Brian Greene, Alan Guth, and Max Tegmark. I attended World Science Festival events and have continued to do so on an annual basis. After my junior year, I took several physics courses in the Summer(at)Brown program -- this really helped affirm my conviction that physics was the right field of study for me and that Brown would be a great place to pursue that interest.

What research areas have you worked in and how has Brown helped prepare you for those experiences? Why did you choose to pursue the particular area of physics that you are in right now?

My physics research experience began after my freshman year at Brown when I worked in Prof. Dell’Antonio’s group to study dark matter using weak gravitational lensing (an effect of Einstein’s theory of relativity). I then moved on to the Collider-Accelerator Department at Brookhaven National Laboratory the following year (for which my group’s research was just published), and then to the X Computational Physics Division at Los Alamos National Laboratory this past summer. These experiences required a lot of computer-based calculations and algorithm writing, as well as hands-on laboratory work at Brookhaven specifically. The physics courses at Brown prepared me very well for these research jobs, particularly Prof. Stein’s “Experiments in Modern Physics” laboratory course and Prof. Mitrovic’s “Thermodynamics and Statistical Mechanics” course.

More recently, I have been working on a senior thesis project with Prof. Jevicki on the AdS/CFT correspondence and holography, the encoding of information in a d-dimensional space to describe a (d+1)-dimensional system. The project has felt quite gratifying thus far, as I have always viewed myself as more of a theoretical physicist. This project is combining a wide range of material which I have studied during my time at Brown. I am very grateful to Prof. Volovich for teaching me general relativity and to Prof. Tan and Prof. Jevicki (with whom I have taken three courses) for teaching me quantum mechanics, as those subject areas are central to my current work. I am also grateful to my differential geometry professor from the Math Department, Prof. Daskalopoulos, with whom I have discussed certain aspects of my thesis. Brown touts its interdisciplinary approach to education, and I can attest that the interrelation between my courses in the Departments of Physics, Math, and Computer Science has been great.

Can you share about your research that was recently published in the Review of Scientific Instruments?

My research team at Brookhaven was interested in generating lithium ion beams by firing laser pulses at chemical targets and filtering the various ion species in the ejected plasma. These lithium ion beams could then be used in the Relativistic Heavy Ion Collider (RHIC) at BNL for nuclear research. Lithium ions can also be fired at a hydrogenous material to incite a nuclear reaction, resulting in the production of bare neutrons. There are many important applications of neutron beams, including boron neutron capture therapy for cancer.

My principal contribution to the team’s research was determining the appropriate chemical material for our laser target and producing such a target from powder samples using a hydraulic press and vacuum oven. Pure lithium is highly reactive and therefore would be extremely difficult to handle safely, and many common lithium compounds are also somewhat reactive, which would cause unwanted chemical reactions to take place while the sample was sintering in the oven. To solve this problem, I educated myself on a variety of lithium compounds, studying their reactivities and thermodynamic properties to determine which would be the most effective for our research. I eventually settled on lithium niobate (LiNbO3), and this chemical enabled our group to produce the results we had been seeking. [The research paper "Low charge state lithium beam production from chemical compounds with laser ion source" can be found here.]

What’s next for you after commencement?

I plan on applying to Ph.D. programs in physics this coming year. In the meantime, I am looking for a job for which I can put to good use my physics, computer, and quantitative analysis skills, which I have gained from my physics courses and research experiences. I see myself studying theoretical physics in graduate school and beyond, with the hope of eventually becoming a professor and researcher at an institution such as Brown. My research interests include high energy theory and cosmology, as well as the relationship between quantum information theory, quantum measurement, entropy, and the arrow of time.