"The Talking Dead: Articulating the ‘Zombified’ Subject Under Putin.” A lecture by Eliot Borenstein, NYU. 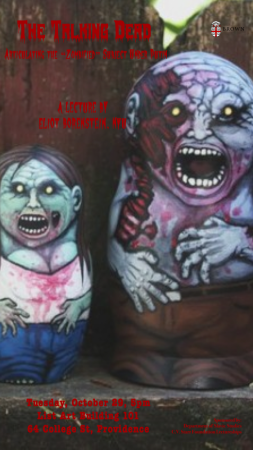 Please join us for “The Talking Dead: Articulating the ‘Zombified’ Subject Under Putin.” A lecture by Eliot Borenstein, Professor of Russian and Slavic Studies at NYU. Tuesday October 29 at 5pm. List Art Building 110 (64 College st., Providence).The talk will focus on the use of the idea of “brainwashing” in Russian public culture and media today all along the political spectrum. Prof. Borenstein is the author of Plots against Russia: Conspiracy and Fantasy after Socialism (Cornell UP); Overkill: Sex Violence, and Russian Popular Culture after 1991 (Cornell UP, 2008); and Men without Women: Masculinity and Revolution in Russian Fiction, 1917-1929 (Duke UP, 2000); as well as of numerous articles on contemporary Russian culture, literature, and media. He is also the editor of All the Russia's Blog of the Jordan Center for the Advanced Study of Russia at NYU (http://jordanrussiacenter.org/all-the-russias/), and the editor and co-translator of Russian Postmodernism: Dialogue with Chaos by Mark Lipovetsky (M. E. Sharpe, 1999). Sponsored by the Department of Slavic Studies and the C.V. Starr Foundation Lectureships. This is the second installment of our series "Post-Soviet Identities: Thirty Years after 1989."

Also in Department of Slavic Studies