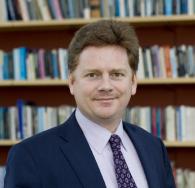 Russell Carey is Executive Vice President for Planning and Policy at Brown University. In this role he works closely with President Christina H. Paxson, the provost, the executive vice president for finance and administration, the Corporation, and members of the community to ensure effective University-wide efforts in planning and policy, in keeping with the University’s overall mission.

Carey serves as the senior officer responsible for coordinating Brown’s strategic planning processes and providing leadership on a broad range of University strategy, policy, and governance matters. His major responsibilities include: establishing measures to assess planning priorities and progress towards Brown’s strategic planning goals; conducting ongoing data gathering, analysis, and outcome assessment to evaluate the effectiveness of the University’s plans, initiatives and policies; and assisting senior officers, divisions and departments in defining strategies and developing plans to ensure continued growth and prosperity. He work closely with other senior officers and oversees the University’s plans and initiatives in the area of City and State economic development, including strategic growth initiatives, and is responsible for campus safety, including oversight of the Department of Public Safety and serving as Chair of the Core Crisis Committee. He serves as a member of the University Resources Committee and the Space Committee. Carey is an Adjunct Lecturer in Public Policy at the A. Alfred Taubman Center for Public Policy and American Institutions where he teaches a seminar on University Governance, the syllabus for which can be viewed here.

Immediately prior to his current role, Carey served as Senior Vice President for Corporation Affairs and Governance at Brown University, since July 2008. He had primary responsibility for leading and coordinating the University’s policies, structures and functioning in the areas of Corporation affairs, University governance, and risk management to assure well-integrated, coherent and effective oversight of these areas. His major responsibilities included, among others: providing leadership and strategic direction in Corporation affairs and University governance; overseeing the leadership and effectiveness of several areas within the administration; working with the senior officers to address issues of risk avoidance; clarifying and integrating the University’s overall approach to managing risk; assuring the University’s compliance with the highest standards of national and international practices in the areas of governance and risk management, and leading Brown University’s participation in shaping the national agenda in these important areas.

Previously, Carey served as Interim Vice President for Campus Life and Student Services at Brown for two years, ending June 2008. In that role he had primary responsibility for planning and setting policies that improved the campus environment for Brown’s undergraduate, graduate, and medical students, and responsibility and oversight for 12 departments at Brown.

Carey is a 1991 graduate of Brown and received his juris doctor from Suffolk University in 1995. He is a member of the Massachusetts Bar. Carey has served in several administrative positions at Brown. From 1991 - 1995 he was Student Life Officer and then Assistant Dean of Student Life, responsible for administering the non-academic disciplinary procedures among other responsibilities. In 1995-1996 he served as an assistant district attorney in Northampton, Massachusetts, and returned to Brown in 1996 to serve as Assistant to the Provost. He subsequently was appointed Assistant to the President in 1997, and assumed additional responsibilities as Secretary of the University in 1998. Named Vice President & Secretary in July 2003, Carey managed the Brown Corporation Office, served as liaison to the Chancellor and other Corporation leaders, oversaw the Advisory Council program and the President's Leadership Council, and carried out other duties and responsibilities related to the governance of the University until being appointed Interim Vice President for Campus Life and Student Services in July 2006.