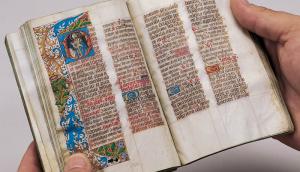 is an independent, member-supported library and cultural center located on Providence’s historic Benefit Street. The library is one of the oldest of its kind in the country, having been operating for over 200 years.  In addition to lending books, the Athenæum sponsors lectures, readings, discussions, community conversation, and concerts.  The building itself is acclaimed for its beauty and its striking architecture.

The Athenæum's special collections include rare first editions of Walt Whitman, Herman Melville, and Louisa May Alcott, among others, and the Travel and Exploration collection includes Ptolemy's Cosmographia (1482) and the Description de l'Egypte (1809-1822), commissioned by Napoleon. The  Athenæum also own two medieval manuscripts, eight incunabula (books printed before 1501), a variety of 19th century pamphlets, a collection of Robert Burns, and a wide range of natural history books.  The manuscripts and incunabula are part of the library's Joseph J. Cooke Bequest Collection, which was acquired by the library in 1883. Cooke, a successful businessman and dry-goods merchant, started collecting books only ten years prior to his death, at which time the collection contained over 20,000 volumes. The Providence Athenæum acquired 959 volumes at auction, including two illuminated manuscripts and several early nineteenth-century handsomely printed titles from the Lee Priory in Kent, England. The original three volume auction catalog with marginalia is included in the collection.

At right:
Illuminated Medieval Manuscript, late fifteenth century:
This is one of two medieval manuscripts in the Athenaeum’s collection. It is a breviary – a service book for monks and clergy. Written in Gothic bookhand, it is typical of manuscripts made in France in the late fifteenth century. The illuminations include numerous decorated letters and five historiated initials with St. Bartholomew, David, St. Maurice, St. Michael, and the Virgin reading. Bequest of Joseph. J. Cooke.