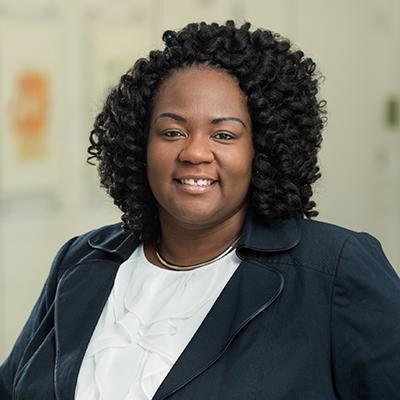 Delalue, who has served as interim vice president since June, will oversee the University’s ongoing efforts to make the Brown campus more fully diverse and inclusive.

PROVIDENCE, R.I. [Brown University/November 28, 2017] — Shontay Delalue, a higher education administrator and scholar with extensive experience working on issues of diversity and inclusion, has been appointed vice president for institutional equity and diversity at Brown University.

Delalue will report to Brown President Christina Paxson and lead all aspects of the Office of Institutional Equity and Diversity (OIED). She will provide strategic direction for a wide range of programs and initiatives to build and sustain a diverse and inclusive environment at Brown, coordinate educational and training efforts, measure and report on progress, oversee compliance and investigate complaints.

“At Brown, we know that a campus-wide commitment to diversity and inclusion is fundamentally important to our mission of advancing knowledge,” Paxson said. “Shontay’s wide range of experiences, her deep knowledge of Brown’s history and current climate and her dedication to creating a fully inclusive community make her an ideal person to lead us in these efforts.”

The OIED plays a critical role in the University’s continued implementation of its pioneering Pathways to Diversity and Inclusion action plan, which was developed over time with Brown community input and released in February 2016. The plan outlines Brown’s commitment to transforming the policies, structures and practices that will lead to meaningful inclusion for all members of its community.

“One of the major opportunities and challenges of this position will be in creating a more inclusive campus environment,” Delalue said. “As a campus leader, it is my responsibility to help the institution grapple with its past and weave diversity and inclusion practices into the fabric of the institution. If our campus gets complacent and says we have completed our work in diversity, we are likely going in the wrong direction. We should continuously strive to be innovative leaders in this space, which will require ongoing work.”

Delalue has served in the vice presidency on an interim basis since June 2017 and is also the assistant provost for global engagement and the director of the Mellon Mays Undergraduate Fellowship Program. She first came to Brown in 2013 as the inaugural director of international student and visitor experience and assistant dean of the college.

Prior to joining Brown, Delalue worked in admissions, advising, international and multicultural affairs, among other roles. Early in her career, she managed the recruitment of students from historically underrepresented groups at the University of Maine. From there, she joined the University of Alaska Southeast, where among many responsibilities she directed admissions efforts and assisted Alaskan Native youth in navigate career goals while incorporating their cultural heritage.

Later, she was a substance abuse and college counselor at the Met High School in Providence and then director of the Intercultural Center at Bryant University, where she also served as a Title IX adviser, collaborated with faculty and corporate partners, and was an adjunct instructor in the sociology and psychology departments.

At Brown, Delalue holds an adjunct assistant professorship in American studies in addition to her administrative roles. The variety of roles in which she has served, she says, have helped her develop a complex understanding of organizational structure in higher education and an understanding of the need to “enhance diversity up, down and across the institution.”

Delalue holds a bachelor’s degree and a master of education from the University of Maine and attended the Harvard University Graduate School of Education’s Institute for Management and Leadership in Education. She earned a Ph.D. in education through a joint program of the University of Rhode Island and Rhode Island College, where her doctoral work used critical race theory to explore the dichotomy that arises for African and Caribbean students who are racialized in a U.S. context.

Delalue’s permanent appointment to the vice presidency, effective Dec. 1, 2017, follows a search conducted by a committee that included faculty and staff from Brown along with undergraduate and graduate students.