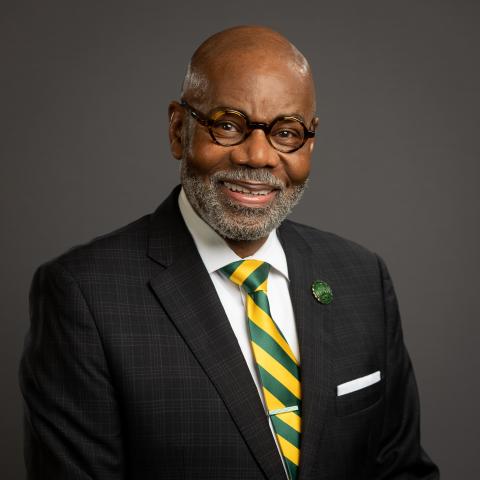 The Office of Institutional Equity and Diversity welcomes Elfred Anthony Pinkard to Brown University, to deliver the  2022 Martin Luther King Jr. Lecture. Pinkard's presentation is titled “The Danger of the Single Story: HBCUs in the Public Imagination.”

This event will take place in Salomon Hall, in the DeCiccio Family Auditorium, and will also be presented virtually via livestream. Closed captioning will be provided.

Registration is required for this event. To register, please visit:

Elfred Anthony Pinkard is the 22 nd president of Wilberforce University in Wilberforce, Ohio.

President Pinkard has served in significant leadership positions including as provost, executive vice president and chief planning officer at several colleges and universities. Under his leadership, kindness, excellence and innovation have been the guiding principles to the transformation of Wilberforce University as a high performing, student-centered and operationally efficient institution. This institutional transformation has involved reimagining the academic enterprise and student engagement experience for Wilberforce University students.

Pinkard’s work and that of his leadership team has resulted in Wilberforce recently being removed from probation by its accrediting body, HLC, and significant financial support from Penn National Gaming, Dominion Energy, JP Morgan Chase, CompTech and VistaCorp and national attention from the BeyGood and Kanye West foundations. Wilberforce University was one of the first institutions to relieve student debt, and the announcement by Pinkard resulted in national and international focus on Wilberforce, the nation’s first, private, historically Black university (HBCU). That decision and subsequent announcement served as a model for other colleges and universities who similarly responded to their student debt.

Pinkard serves on the board of directors of the Council of Independent Colleges. In addition to his work in the academy, Pinkard serves on the leadership team at the Higher Education Leadership Foundation. His writings on popular culture, HBCUs and the African American experience can be found at anoldschoolperspective.com.

Pinkard is a member of Alpha Phi Alpha Fraternity Inc. and is a native of Miami, Florida.

The Rev. Martin Luther King Jr. came to Brown University on multiple occasions in the 1960s, including an April 1967 visit less than one year before his death, where he delivered an impassioned speech on the Vietnam War and civil rights in the U.S. The Martin Luther King Jr. Lecture, organized by the Office of Institutional Equity and Diversity, was established at Brown in 1996, with former New York Mayor David Dinkins as the inaugural speaker.