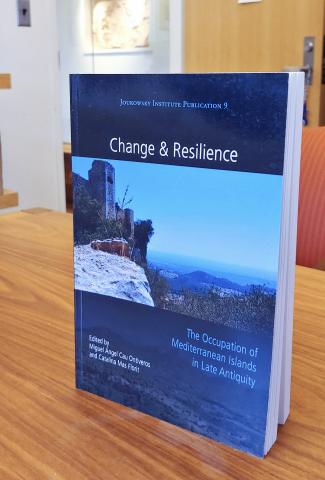 The ninth volume in the Joukowsky Institute Publication (JIP) series, Change and Resilience: The Occupation of Mediterranean Islands in Late Antiquity, edited by Miguel Ángel Cau Ontiveros and Catalina Mas Florit, is available from Oxbow Books.

Change and Resilience offers a view of the main Mediterranean islands from West to East in Late Antiquity because Mediterranean islands can contribute in fundamental ways to our understanding not only of earlier colonizations but also later periods. The volume explores specifically the time frame from the fall of the Roman empire to the Medieval period. A first group of papers covers islands and island groups in the Central and Western Mediterranean, including the Balearic Islands, Corsica, Sardinia, Sicily, and the Adriatic islands. Together, these five papers highlight several common themes across the region: local or indigenous sites were often reoccupied in Late Antiquity, the rural countryside typically played a significant role in the contributions of islands to wider Mediterranean economic networks, and islands – big and small – often played significant roles in shifting political and religious power. The second group focuses on the Eastern Mediterranean. Three papers cover a range of islands, including Crete, the Cyclades, and Cyprus. Together they emphasize the impacts external shifts in political power and economic ties in the Eastern Mediterranean had on island landscapes, as well as the connected relationship between sacred space and territorial occupation across many of these islands. The final group of papers pivots on changing perceptions of island landscapes in Late Antiquity—or “island mindscapes.” Three papers focus on how communities adapted as they underwent Christianization in island contexts, emphasizing the diverse and varied ways that island landscapes became “Christianized,” as well as how other political and economic factors shaped the dynamics of change.

Change and Resilience: The Occupation of Mediterranean Islands in Late Antiquity