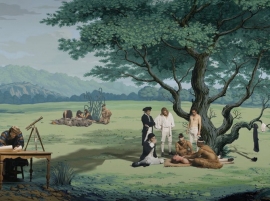 Lisa Reihana’s powerful digital installation—in Pursuit of Venus [infected]—is a response, or a corrective, if you will, to the historical record.  The 70-foot-long scrolling video projection is based on eighteenth-century views of the Pacific Islands as presented in the historic French wallpaper Les Sauvages de la Mer Pacifique (Native Peoples of the South Pacific), 1804–1805. Reihana reimagines the wallpaper through live-action vignettes placed within an idealized background inspired by the original wallpaper and asks viewers, “Who tells the story and how do images, past and present, shape our understanding of history?” Reihana has revised the narrative to critique notions about Pacific culture and history that originated with the European voyages of exploration during the eighteenth-century Age of Enlightenment and persist even today.