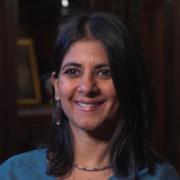 Professor Ramanan works on probability theory, stochastic processes and their applications, including reflected processes, large deviations theory,  high-dimensional probability and applications to asymptotic convex geometry.  She has also developed novel mathematical frameworks for the analysis of stochastic networks, Markov random fields and interacting particle systems, which arise as models in a variety of fields ranging from operations research and engineering to statistical physics and neuroscience. Her work combines tools from several fields including discrete probability, stochastic analysis and partial differential equations.  She also has four patents to her name.

Her research has been recognized by several honors, including a Vannevar Bush Faculty Fellowship, a Guggenheim Fellowship, the Newton Award, and the Erlang Prize from the Applied Probability Society.  She is an elected member of the American Academy of Arts and Sciences and a Fellow of several societies including the American Mathematical Society, American Association for the Advancement of Science, Society for Industrial and Applied Mathematics, Institute for Mathematical Statistics and INFORMS.   She  has served as the Area Editor for Mathematics of Operations Research, is currently co-editor-in-chief of the Annals of Applied Probability and serves on  several other editorial boards.  She is an Associate Director at the Institute for Computational and Experimental Research in Mathematics (ICERM).   She cares deeply about inclusivity and math communication to diverse audiences, and runs a math outreach group called the Math CoOp.  She also founded the SEAM (Social Equity and Applied Mathematics) seminar, and initiated a bilingual math outreach program, called Mathematics Sin Fronteras.

Her research has been supported by grants from the National Science Foundation (continually since 2003),  Department of Defense, Army Research Office, Air Force Office of Scientific Research, Office of Naval Research, Guggenheim Foundation and Simons Foundation.