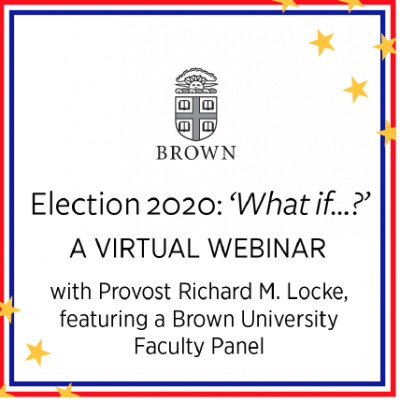 Overview
The outcome of the U.S. Presidential and Congressional midterm elections has a significant influence on individuals, institutions and communities locally and globally. This University sponsored event brings together Brown University faculty experts to offer valuable information and important insights that will be beneficial in understanding and preparing for Election Day and beyond. Panelists will discuss the election in the broader context of U.S. history; offer tools for assessing election returns and understanding the range and implications of possible outcome scenarios; discuss the distinct role of African American voters in this election; and raise Constitutional issues at play, including the significance of the balance of power, election processes and protections, and the possible role of the US Supreme Court. There will be time for Q&A.

To submit a question in advance of the event, please include it on your registration form.

Corey Brettschneider is professor of political science at Brown University, where he teaches constitutional law and political theory. His recent writing has appeared in The New York Times, Politico, and The Washington Post. His new book is The Oath and the Office: A Guide to the Constitution for Future Presidents, which Kirkus calls "vital reading for all Americans." He is also the author of When the State Speaks What Should It Say? How Democracies Can Protect Expression and Promote Equality (Princeton University Press, 2012) and Democratic Rights: The Substance of Self-Government (Princeton University Press, 2007). He is the editor of the new series Penguin Liberty (Penguin/Random House) and the author of numerous articles in top political science journals and law reviews, including the American Political Science Review and The Texas Law Review. His constitutional law casebook is widely used in classrooms throughout the United States. Brettschneider holds a Ph.D. in politics from Princeton and a JD from Stanford Law School.

Collins is the recipient of numerous fellowships and awards including the Urban and Local Politics Section of the American Political Science Association’s Susan Clarke Young Scholar Award, the Brown University Presidential Postdoctoral Fellowship, and the Harvard University Kennedy School of Government’s Ash Center for Democratic Governance and Innovation’s Democracy Fellowship. Collins was also selected as a “40 Under 40 Emerging Civic Leader” by the Los Angeles Empowerment Congress.

His work has been published in Political Behavior, the Journal of Urban Affairs, Local Government Studies and the Harvard Journal of African American Policy​.  His writings have appeared in the Washington Post, and he is currently an opinion-editorial columnist for Education Week. He holds a B.A. in English from Morehouse College and both an M.A. in African-American Studies as well as a Ph.D. in Political Science from UCLA.

Among books she has authored or co-authored are Electing the Senate: Indirect Democracy before the Seventeenth Amendment (Princeton University Press), Gateways to Democracy: An Introduction to American Government (Cengage), The Contemporary Congress (Thomson-Wadsworth), and Partners and Rivals: Representation in U.S. Senate Delegations (Princeton University Press).  She has also published articles in the American Journal of Political Science, Legislative Studies Quarterly, Studies in American Political Development, and the Journal of Politics.

Schiller has been a contributor to MSNBC, NPR, CNN.com, and Bloomberg News. She provides local political commentary to the Providence Journal, WPRO radio, RIPBS A Lively Experiment, and is the political analyst for WJAR10, the local NBC affiliate in Providence.

Michael Vorenberg is associate professor of history at Brown. He received his A.B. and Ph.D. from Harvard University, which awarded him the Bowdoin Prize for the best graduate essay, the Harold K. Gross Prize for the best dissertation in history, and the Delancey Jay Prize for the best work on human liberties. After receiving his Ph.D., Professor Vorenberg was a postdoctoral fellow at the W.E.B. Du Bois Institute at Harvard, and then an Assistant Professor of History at the State University of New York at Buffalo. He began teaching at Brown University in 1999, became the Vartan Gregorian Assistant Professor in 2002, and was promoted to Associate Professor with tenure in 2004.

His first book, Final Freedom: The Civil War, the Abolition of Slavery, and the Thirteenth Amendment was published by Cambridge University Press in 2001.  It was a Finalist for the Lincoln Prize and was used liberally for Steven Spielberg's film Lincoln (2012). He is also the author of The Emancipation Proclamation: A Brief History with Documents (St. Martin's/Bedford, 2010).  Currently, he is at work on a book about the ending of the Civil War (under contract with Alfred A. Knopf), and also one on the impact of the Civil War on American citizenship. The projects have received funding from various sources, including the American Council of Learned Societies and the National Endowment for the Humanities. He has published numerous essays and articles on topics ranging from Lincoln's plans for the colonization of African Americans to the meaning of rights and privileges under the Fourteenth Amendment. From 2004 to 2007, Professor Vorenberg was a member of Brown University's Steering Committee on Slavery and Justice.