The Zika virus, best known for its strongly suspected link to fetal birth defects, has become a major health crisis in Central and South America. On Weds. Feb. 10 at 12:30, Brown University experts will gather to “separate fact from fiction” concerning the emergency. 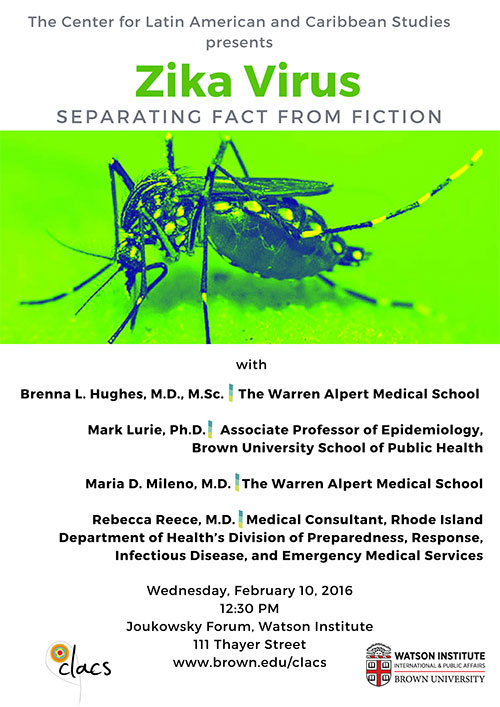 PROVIDENCE, R.I. [Brown University] — Though it has been known since 1947 when it was identified in Uganda, in recent months the mosquito-borne

The virus makes people sick, often only mildly, for up to a week with symptoms such as fever, skin rashes, conjunctivitis, muscle and joint pain, and headache, according to the World Health Organization. The greatest concern, however, has been a suspected link between infection while pregnant and the birth defect microcephaly, in which babies are born with significantly smaller heads, which can affect the brain. Some people are also worried about a coincident uptick in cases of Guillain-Barré syndrome, which involves nerve damage.

To help people understand the latest accurate information about what he WHO has declared a Public Health Emergency, the Center for Latin American and Caribbean Studies and the Watson Institute for International and Public Affairs will convene the panel “Zika Virus: Separating Fact from Fiction,” featuring four medical and global health experts.

The event is open to the public and will be webcast.

A panel discussion to clarify what’s known vs. what’s just feared about Zika. Topics will include disease epidemiology and policy responses.

The panel will also be webcast.