The Warren Alpert Medical School has been providing student-centered, patient-focused medical education for a half century, say graduates of its first class and members of this year’s incoming M.D. Class of 2026.

This photo of the M.D. Class of 1975, the first class to earn medical degrees from Brown University, was taken in the school's original anatomy lab. The rows of chairs were positioned so that students could observe cadavers for study from above.

The year before had been one of worry. Kenney was then in his fourth year of a six-year program that would earn him bachelor’s and master’s of medical science degrees; he’d matriculated in 1968 on the near-guarantee that by the time he was ready to enter medical school, he’d be able to do so at Brown.

But by Fall 1971, that promise had yet to be fulfilled. A share of Brown faculty initially opposed the establishment of a medical school, arguing that it would dilute Brown’s undergraduate teaching mission and strain University finances.

As faculty and administrators debated the future, Kenney and his classmates did the only thing they could do: hunker down and get to work. Glenn Mitchell recalls the first day of classes in 1971 as one of anxiety and tension — not so much about the swirling medical education questions, but rather about his anatomy course. 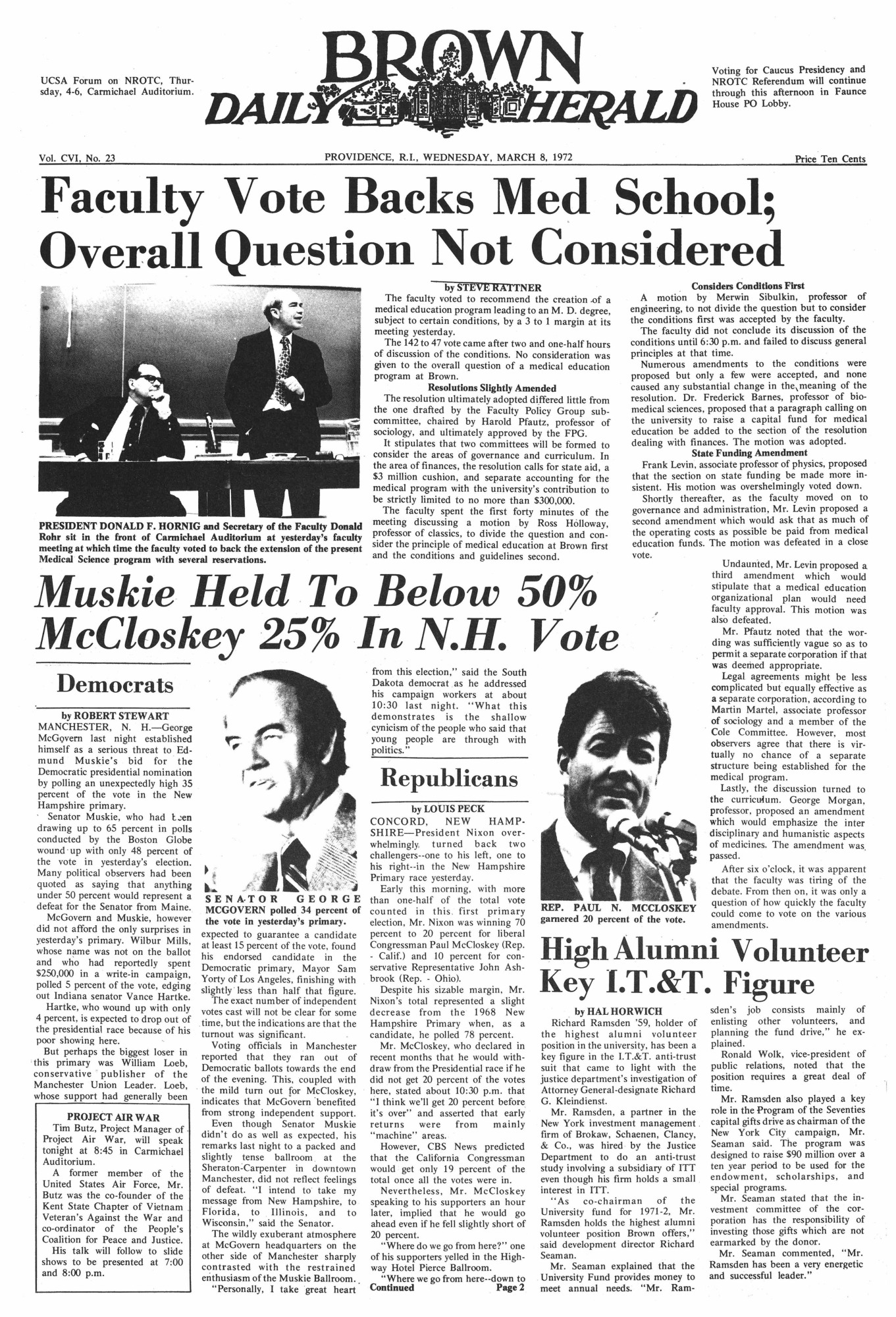 “We were all incredibly nervous because there was this gurney with a sheet over it, and we knew this was a body,” Mitchell said. “What happens if we faint? It would be really embarrassing!”

After months of discussion, in March 1972 most of the Brown faculty had been swayed: they voted 3 to 1 to approve the creation of an M.D. program, which the Brown Corporation subsequently authorized.

“It was a relief that we weren’t going to have to go shop for another place [to earn an M.D.], because we were loving it,” Mitchell said. “So it was a lot of gratitude to the Corporation for having said yes.”

Six months later, not one, but two classes of medical students officially began at Brown: Mitchell and Kenney’s class, who began their second year of medical studies; and the M.D. Class of 1976, who started their first. Students from both classes would proceed to earn doctor of medicine degrees from Brown — the first medical degrees to be granted in the University’s history.

Kenney remembered the relief he felt as he returned to campus. “Now we’re bona fide, second-year medical students at a bona fide medical school,” he said. “We could concentrate on actually learning.”

Something old, something new

One thing that hasn’t changed (much) is the anatomy course. Fifty years later, students are still dissecting cadavers, in contrast to many of their peers across the country who learn anatomy via virtual tools. In the 1970s, anatomy was “infamous” for its level of difficulty, Kenney added, and that’s still true today. Aja Tucker, a member of the school’s Class of 2026 now in the first months of her medical student experience, said that so far, “anatomy is probably one of the hardest classes, because it has new terms and material that I haven’t seen before, in comparison to other classes.”

The spaces where Brown’s medical students learn anatomy have, thankfully, evolved over 50 years. Mitchell’s first lecture took place in “a reproduction 16th-century Dutch amphitheater” in the basement of the BioMedical Center. “We all sat on these little stools in a very steep room and looked down” at the professor, he said. As for anatomy lab, every student underwent the rite of passage of “smelling like formaldehyde,” Mitchell said; when they went to lunch at Faunce House, “no one would sit near us.”

Today’s students have very different rites and routines: After completing their hands-on work in the state-of-the-art anatomy lab on the third floor of the dedicated Warren Alpert Medical School building, they can take a shower and change their clothes in adjoining locker rooms.

Of that building, which is a short walk down College Hill into Providence’s Jewelry District, Kenney said: “It was a major conceptual leap for Brown to build teaching space away from — not on — the [main] campus. That’s a big difference for the students now. They identify the medical school with that building.”

The class composition has changed significantly, too: the first class was just 22% women, compared with 53% today; the earliest classes had little racial or ethnic diversity, while 27% of the newest class is comprised of students from backgrounds underrepresented in medicine.

There’s more geographic diversity, as well: 50 years ago, nearly every medical student had earned their bachelor’s degree at Brown; now they hail from 57 different undergraduate institutions, from all over the country and the world. They apply to the medical school via several paths that didn’t exist in 1972, including Brown’s Program in Liberal Medical Education, post-baccalaureate linkages and the Early Identification Program (EIP), which admits promising Rhode Island residents from selected colleges in the state.

The school also has an EIP relationship with Tougaloo College, a historically Black college in Jackson, Mississippi. It was through that route that first-year student Tucker — and her older sister, Nailah Tucker, a member of the Warren Alpert Medical School’s Class of 2024 — came to Brown.

“I literally followed her and did the same thing she did,” Aja Tucker said. A native of Arlington, Texas, she said she had expected a class of mostly New Englanders, but she’s met many fellow Texans and other Southerners. “It’s nice to know these people are also adjusting to living in the North,” Tucker said.

Mitchell and Kennedy said that in communication across generations of students and alumni from the school, the focus is often on what’s changed over its first half-century.

“There’s nothing worse than an old doctor,” joked Mitchell, a vice provost at Harrisburg University of Science and Technology who also trains emergency medicine residents at Penn State Health’s Hershey Medical Center. When he was a student, Mitchell said, “the older physicians … would go, ‘oh, it was better in the old days,’ and we would go, ‘yeah, sure.’ And now we all say, ‘it was better in our day,’ and all these medical students we talk to go, ‘oh yeah, sure.’”

Technology has made a big difference, said Kenney, a senior lecturer at Harvard Medical School who recently retired as chief of surgery at Brigham and Women’s Faulkner Hospital after 31 years.

“What they’re teaching [now] is totally different — stuff we didn’t even know existed back then… And the amount of knowledge students are being asked to retain is light years more than what was required of us.”

The deans … told us how they could support us and how they’re there for us. It felt like they were in our corner, and I needed to hear that.

After years of anticipation, Tucker was excited to finally arrive in Providence on her first day of medical student orientation in August: “I showed up 30 or 40 minutes early,” she said. When the other students had arrived and breakfast was served, she was too nervous to eat, but she was quickly put at ease. Tucker met new classmates and listened to presentations about study strategies, professionalism and what to expect in the initial semester of medical school.

“The deans … told us how they could support us and how they’re there for us,” she said. “It felt like they were in our corner, and I needed to hear that.”

Compassion and humanism have marked medical education at Brown from day one. Kenney, looking back, said students were drawn to a medical program that was “part of the larger fabric of the University” and included humanities courses. Faculty, meanwhile, came to Brown from other medical schools because “they saw an opportunity to do things in a different environment… to teach [medicine] in a fashion that was perhaps more humanistic even then,” he said. “That humanism, I think, has been a guiding principle for all of the classes that have graduated since.”

[Faculty] saw an opportunity to do things in a different environment… to teach [medicine] in a fashion that was perhaps more humanistic even then. That humanism, I think, has been a guiding principle for all of the classes that have graduated since.

Mitchell remembered his anatomy professor, Dr. George “Erik” Erikson, teaching the class how to treat cadavers with respect “because this person had donated their body to medical training,” Mitchell said. That same attitude carries on today: Warren Alpert Medical School students honor those donors and their families with an annual Ceremony of Gratitude.

Mitchell said the class that started 50 years ago was well supported by faculty and administrators, but the workload could be oppressive. The demands of medical school remain rigorous a half century later, and leaders at the school continue to grow and strengthen programs and initiatives to support future physicians.

Tucker said her anatomy course director, Dale Ritter, has helped her not only to better understand the material, but to adjust to life as a medical student. “He said, ‘I know medical school is hard, and it’s gotten harder over the years,’” she said, adding that Ritter urged students to take care of themselves as well as others.

Of the faculty in general, Tucker said: “I love how they make sure that their students know that they’re here to support you … that no matter what you’re going through, if you feel like you’re overwhelmed, that they’re there.”

October 3, 2022
As the University commemorates 50 years of medical education at Brown, members of the Warren Alpert Medical School’s Class of 2026 celebrated a traditional rite of passage at this year’s white coat ceremony.
Read Article
Health and Medicine

What to know about monkeypox now: Brown University experts weigh in

September 20, 2022
Brown scholars from a variety of departments and perspectives offered key facts and insights on the persisting public health emergency.
Read Article