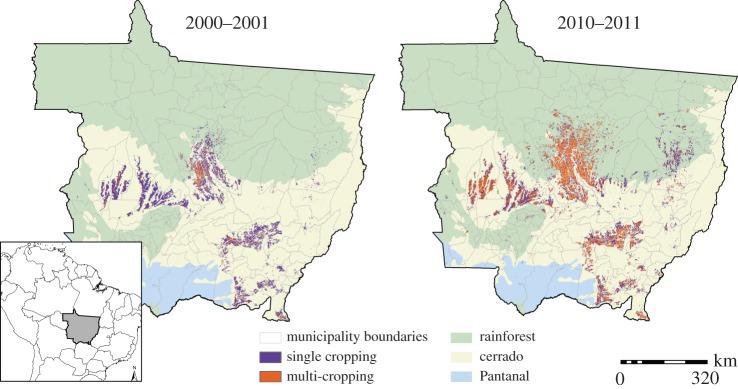 The Brazilian agro-industrial frontier in Mato Grosso rapidly expanded in total area of mechanized production and in total value of production in the last decade. This article shows the spatial pattern of that expansion from 2000 to 2010, based on novel analyses of satellite imagery. It then explores quantitatively and qualitatively the antecedents and correlates of intensification, the expansion of the area under two crops per year. Double cropping is most likely in areas with access to transportation networks, previous profitable agricultural production, and strong existing ties to national and international commodity markets. The article concludes with an exploration of the relationship between double cropping and socioeconomic development, showing that double cropping is strongly correlated with incomes of all residents of a community and with investments in education. We conclude that double cropping in Mato Grosso is very closely tied to multiple indicators of socioeconomic development.