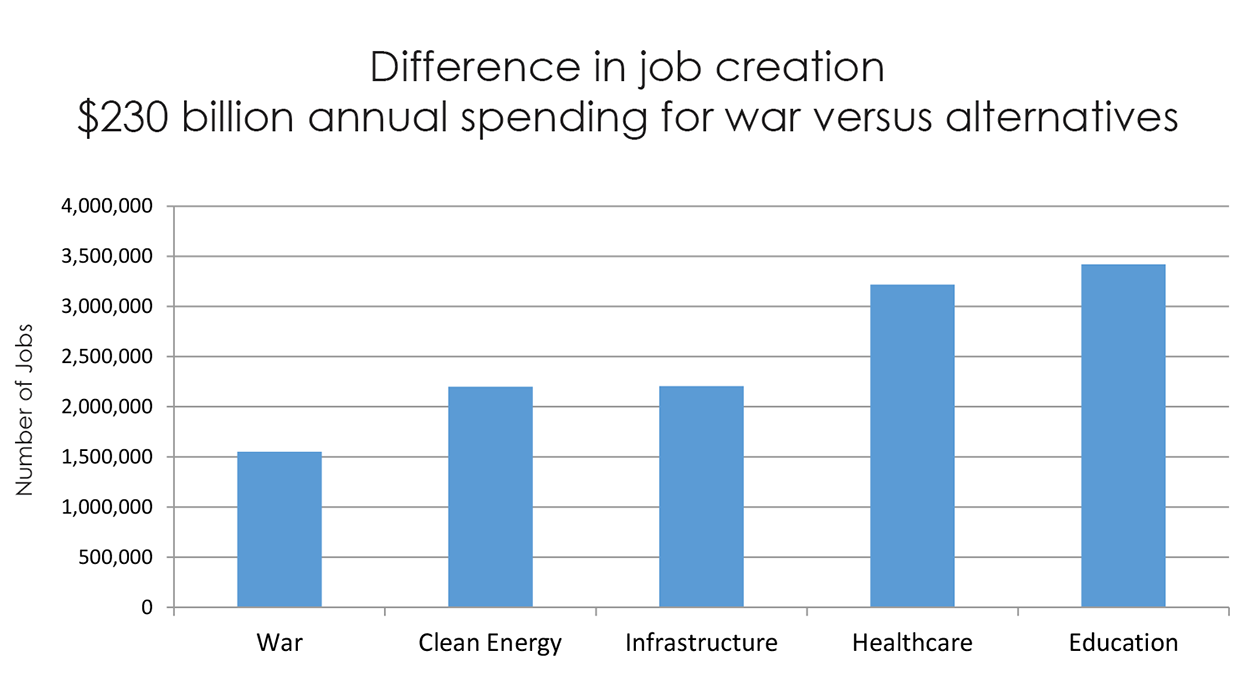 The study by economist Heidi Garrett-Peltier documented how many jobs are created in a variety of domestic sectors for every million dollars of federal money spent. She compared that to the number of jobs created for every $1 million spent on defense and found that domestic spending outpaces military spending in job creation by 21 percent (for wind energy development) to 178 percent (for elementary and secondary education).

“The U.S. has a bloated military budget, and one of the reasons it has historically remained outsized is that defense spending creates jobs, both in the military and in the industries that supply goods and services to the armed forces,” said Garrett-Peltier, an assistant research professor at the Political Economy Research Institute at the University of Massachusetts, Amherst. “But when we compare federal spending on defense to the alternatives, such as health care, education, clean energy or infrastructure, we find that all of these areas create more jobs than an equivalent amount of military spending.”

She used an economic model called an Input-Output (I-O) model to analyze how many jobs are created for every $1 million in spending, drawing on information from the U.S. Economic Census, Internal Revenue Service tax documents, the U.S. Bureau of Labor statistics, U.S. Bureau of Economic Analysis data and other sources.

“I-O models estimate the various components of the supply chain or the inputs that go into producing any good or service,” Garrett-Peltier wrote in the study. “They also show the outputs, where each industry sells its goods or services to various categories of customers.”

That snapshot helps explain why domestic spending creates more American jobs, she noted. First, some of the jobs created by defense spending “leak” overseas, whereas construction or nursing jobs created by investing in infrastructure or health care are created, and remain, in the United States.

Second, the labor intensity involved in domestic spending is greater than defense spending. Whereas the military is more dependent on equipment, and funds allocated might go to products, Garrett-Peltier said, education requires people, like teachers, aides, principals and others.

The data shows that the Trump administration’s proposal to increase military spending by $54 billion would create fewer jobs than equivalent spending on health care, education, clean energy or infrastructure, Garrett-Peltier said, and would offer less economic benefit to the nation.

“This report is especially important in helping put fact and public interest rather than myth or self-interest at the center of discussions of the Trump administration’s plan for vastly increased military spending,” said Catherine Lutz, co-director of the Costs of War Project and the Thomas J. Watson, Jr. Family Professor of International Studies at Brown.

“How our tax dollars are spent should reflect our priorities,” Garrett-Peltier said. “We can have a healthier, more educated population living in a cleaner environment at the same time that we can create more jobs. Looking at the $230 billion per year that the U.S. has been spending on strictly war-related purposes since 2001, we could have created up to 3 million more jobs if we had spent these funds on various domestic priorities rather than war.”