Communication theorist cheers ‘Lunar Library’ to be delivered to the Moon

Brown engineering professor Chris Rose thinks the tiny data disks with volumes of human knowledge currently flying to the Moon on the Beresheet spacecraft are a great way to communicate across time and space.

PROVIDENCE, R.I. [Brown University] — When Israel’s Beresheet spacecraft makes its historic attempt to become the first private spacecraft to land on the Moon, it will be carrying a little something in addition to its scientific payload: a 30-million-page digital archive comprising the entirety of human history.

The “Lunar Library” is designed to preserve a record of human existence for our far distant ancestors or for any interstellar travelers who might pass through our corner of the galaxy after we’re gone. The history of Earth’s civilizations and cultures is all contained on 25 tiny data disks, packed in a protective casing designed to last billions of years.

The idea of using physical devices as a means to communicate across time and space is music to the ears of Brown engineering professor Chris Rose.

Rose, a communication theorist, wrote a landmark paper in 2004 arguing that we’ve been going about interstellar communication all wrong. For years, we’ve been listening for electromagnetic signals — radio or microwaves — in the hopes of hearing other inhabitants of our universe. That’s fine, Rose argues, but it’s not the most efficient means of making contact. He shows with mathematical precision that as long as you’re not worried about how soon the message is received, then it’s far more efficient to attempt to communicate through physical objects.

“If you absolutely positively have to get the information to the destination as quickly as possible, you're stuck with electromagnetics,” Rose said. “However, if you can afford some delay, it turns out that it is vastly more efficient to inscribe your message suitably densely on a piece of matter. The most interesting result from the paper was that if energy is a proxy for difficulty, then our first discovery of extraterrestrial intelligence seems more likely to come from discovering alien artifacts — like the Lunar Library that can persist for eons — than from listening to radio waves that disperse and flit weakly by.”

That means that the best way to preserve record of our own existence is to sprinkle artifacts like the Lunar Library in as many places as we can, Rose says. It’s far more likely that those objects will be found than it is that our myriad radio broadcasts will be heard. 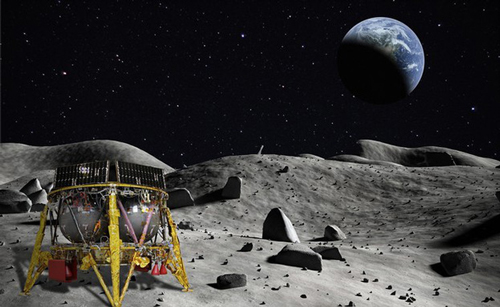 “So the notion of lofting what amounts to a spec — both of matter and of the totality of human knowledge — into space as a hedge against planetary mortality seems like a whisper in the darkness, a sort of fatalistic whimsy,” he said. “But even whispers can become cacophonies if enough of us do it, and in that there is a whiff of exhilaration.”

And while he’s pleased that people are adopting the physical approach to communicating across time, Rose sees this effort as a somewhat somber reminder of our impermanence.

“I alternate between a sad smile and exhilaration at the thought of the Lunar Library,” he said. “The fact is that our little blue ball is fragile. We have geological and evolutionary records of myriad cataclysms like the stray large rock that ended the Cretaceous period. Then there's the issue of self-induced trauma such as global warming or apocalyptic international aggression.

“So I see the Lunar Library as a first shaky step toward humankind persisting on geological scales and galactic scope. And if that notion isn't exhilarating, I don't know what is.”