Roberta Powell’s career began in finance and administration for the transportation industry. However, in 2005, a breast cancer diagnosis inspired her to get a nursing degree from Rhode Island College, and she later became a Certified Diabetes Educator. After several years working as a nurse educator, she realized that patients’ poor numeracy skills significantly impeded their ability to comply with their healthcare needs. She became interested in creating a system to simplify the current healthcare numerical values in order to empower individuals to engage in self-care and self-advocacy, thereby improving health outcomes. As a Swearer Center Practitioner in Residence, Roberta is currently expanding on her healthcare numeracy research and involvement in the health community in Providence, and working on developing a scale to interpret health test results.

How and why did you become a Practitioner in Residence?

Someone thought of me! They had heard that the Swearer Center was looking for a Practitioner in Residence so they sent me the email and I thought, “Oh this is really interesting!” I realized then that this would give me an opportunity to work on my numeracy project, which I had been thinking about but hadn’t had a vehicle or the wherewithal to really start yet.

Can you tell me more about the numeracy project you’re working on?

Yes, I’m really excited about it. So my background is nursing, and actually prior to becoming a nurse I worked in the transportation industry, both for Amtrak and MBTA. Then I was diagnosed with breast cancer, so I took time off of work and just focused on my health. Going through that process of chemotherapy, radiation, and surgeries, I realized that there’s a problem with healthcare – a problem of communicating with patients. I felt I was pretty educated, yet I didn’t fully understand what was going on – it was almost like the doctors and nurses were speaking another language. 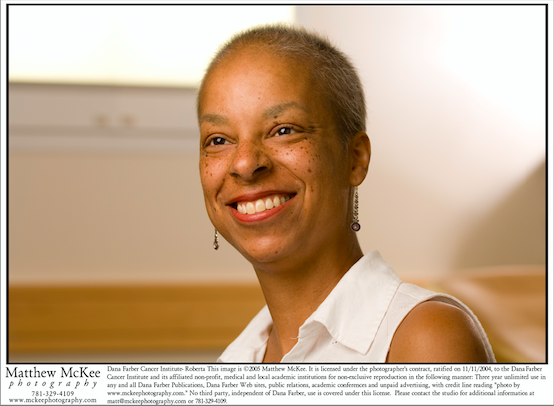 So I decided to change my career; I became a nurse. And as a nurse, I realized that there’s a huge problem with educating patients as well as communication. For example, diabetes is completely number-driven, with blood sugar levels, lab values, insulin to carb ratios, dosages – everything. But a lot people just didn’t understand those numbers because they were innumerate, which is to numbers as literate is to reading and writing.

So that’s always been kind of in the back of my head; I knew I wanted to figure out how to tackle this problem. Then when I ended up applying to be a Practitioner in Residence, I came up with the idea of developing an app to help innumerate patients understand their vital signs as well as their lab values. Things like blood pressure and BMI are really complicated and obscure numbers that no one really gets, so my idea was to simplify them – to convert all lab values and vital signs into a zero to 10 scale or a one to five scale. Then, instead of “172 over 86,” people could say, “Your blood pressure is four.” Four out of five, that’s high. People understand that.

Why do you think this issue hasn’t been successfully addressed yet?

The big challenge is the lack of research. Because, you know, everyone says this is a great idea and I think it’s a great idea, but I can’t prove that. If we get the app all ready to go and I go to Blue Cross Blue Shield and say, 'Hey, there’s this app that will really help your members,' they’re going to say, 'How do you know?' So I need research and I need some data, just to show that we’ve asked people, we’ve done surveys, and we’ve determined that people would be interested. And who knows, we may find out through our research that people don’t care about their blood pressure! I doubt it, but it’s hard to know what you don’t know. But we’ll figure it out, because we have a bunch of smart Brown students.

Also, one might say that because people make a lot of money off of people being sick, there’s not a real incentive for people to be healthy or to understand. Some might say that health care providers like the idea of being the holder of knowledge and a kind of high priest. That’s why I’m not targeting healthcare providers who can pass the app on – my target is the patients. I’m really hoping that they’ll use the app independently to help themselves.

What are you hoping to gain from being a PIR and what are you most excited about?

I’m excited because this idea has really taken off. I have so many students saying to me that their parents or grandparents have trouble understanding their blood pressure or whatever and that this would be so helpful for them. Everyone seems to get it, so everyone seems to be really engaged and motivated, which is exciting. And I’m excited to get research to back up that there’s a need for this, and also to figure out if we’re approaching it right. Because with certain lab values, low is bad and high is bad, so you have a 'good' spot in the middle. In those cases, where do the numbers fall? Do we use an analog dial, color coding or a bar chart? Those cases are more complicated. Or maybe they’re not complicated but those are the things I don’t know how to figure out [laughs], so I’m hoping the students will help.

How did you get connected with the students who are now involved?

I did a number of things, with the help of the Swearer Center. I had guidance from folks that said to go on Courses at Brown, find professors, and have them email their students ... I was also invited to speak at the Community Corps meeting so I got some student [interest] there. And word sort of spread – people referred one another, and people contacted me. One day I just sat by a student while having lunch and we started chatting, so I told her about it, and she was like, “Oh wow, I’d love that!” So it’s been all kinds of ways. I just picked up a few students from my Lunch & Learn, too.

Right now, we have about fifteen signed up. I think we’re going to have five aspects of the project -- we’ll have a group doing the math calculations and we’ll have UI/UX coder folks designing the actual app and website. Then we’ll have public health folks doing research. We’re also going to have embedded explainer videos, so we’ll need graphic design or animation folks to help with that and English majors to write scripts for the videos. I could really use anything –  you could be majoring in underwater basket weaving and I’d figure out how you could, you know, design a basket for the app [laughs].

Another large part of your role as a PIR is mentoring students. Have you had any one-on-one conversations so far? What did you talk about?

I’ve had conversations with I think most of the students who [were planning to attend the first meeting about the project]. I try to meet with them just to give them an idea of what’s going on. They tell me what they’re interested in, and I ask them what their majors are. I had one student who was studying elementary education or something like that – something that you wouldn’t think had anything to do with my project – but it has everything to do with it. This is all about educating patients in a very basic language, so she might end up being the most important student contributor!

Do you anticipate talking to students about pursuing ideas they have in a similar way?

I haven’t yet but I think this might help them to start thinking that way. And students have already impacted the project! I initially went into this thinking I was going to do a zero to 10 scale and one student said, “Why not one to five? All surveys are one to five, and ten is too wide of a range.” And they were absolutely right.

What have been some of the most difficult or most surprising aspects of working on this project?

It’s so early on that I haven’t faced anything particularly hard or surprising yet, although I did meet with folks with the [Jonathan M. Nelson] Center for Entrepreneurship who asked some very hard questions. Not hard in a bad way but, for example, I spoke to one student who asked me how I would measure patient engagement. That’s a really good question and I didn’t have an answer. That was maybe surprising, because usually I get a lot of positive feedback and this was more of a challenge, but I need that, too. I need people saying, 'Well, wait a minute, this all sounds good but…' We need to see where the challenges are going to be; that’s why research and surveying patients are so important. Because who knows? Patients may say it’s a stupid idea or that it’s not something that’s interesting to them. I’m assuming everyone wants to understand what their health numbers mean, but that’s an assumption. We have to test it.

One other challenge will be making sure the students doing research get out to talk to people who are going to actually use the app. I’m guessing that most students are pretty healthy and wouldn’t necessarily have a need for it, so they have to start thinking like the patients and getting to the people who would use this type of application. It’s really hard to survey in hospitals, because you have to get to the IRB board and be approved and stamped and all of that, so one student who’s going to be surveying might just talk to people at Walmart or CVS. I think getting to Joe General Public Person and then engaging them to answer our surveys might be a bit of a challenge, but I’m sure students will figure that out.

What do you hope students will gain from working with you on your project?

I hope that students understand that they can absolutely make major changes in the world and in their community by creating something. And they can do so just by thinking of it – I’m not a genius, but I realized that this was something needed, and now I’m working with geniuses to make it a reality. So I want students to understand that it starts with just an individual having a good idea. And I personally believe that as long as you put good out there, good will come back. Finally, I also want students to really have an experience of making change on an individual level and for them to learn how to work collaboratively on a project and create something out of nothing. Right now, it’s just an idea, but I really do believe it will make a big impact. There’s no doubt in my mind.