David Schwartz '09 is the co-founder of the national nonprofit Real Food Challenge, which he started during his time at Brown through a Social Innovation Fellowship at the Swearer Center. This semester, Schwartz returned to Brown as one of the Swearer Center’s Social Entrepreneurs in Residence.

Why did you want to become a Social Entrepreneur in Residence?

I spent the last 10 years starting up, growing, and managing a national organization that works on food justice issues. After all that time – basically my entire 20s – I realized I needed to take a bit of a step back to capture 10 years of learning done in a hustle. Coming to Brown seemed like a great opportunity to be able to teach off of the work I had done and also have access to incredible resources in the form of faculty and this community’s networks. And in the form of students, who are themselves figuring out how to plug into the next wave of social justice, community organizing and social enterprise ventures, whether that’s starting them themselves or figuring out how to back ones that already exist. Becoming an SEIR seemed like an exciting way for me to return to my roots, be able to reflect and also set up some great learning opportunities for myself.

Tell me about the course you’re teaching as an SEIR, “Social Change and Building Powerful Organizations.”

During my time leading the Real Food Challenge, I constantly felt like I was building the plane as I was flying it. Which I think is par for the course, but at the same time, in my more lucid moments, I was like “Gosh, I wish I had learned this in college!” I took social entrepreneurship classes and history classes where we learned about social movements of the past – I learned all this theory, but there was something missing that I wish I had learned. So, on one hand, this class is meant to fill some of those gaps, not only in historical case studies of powerful social movements and organizations from around the world, but also in some of the nuts and bolts of what it’s like to actually run an organization that is growing, that is big, that is complex. So it’s a preview, in some ways, of the journey I went on, for students who may be taking that journey themselves or who may be curious about it.

On the other hand, this course has a second set of goals, which is attempting to bridge some of the gaps in knowledge of the social justice sphere. A lot of the organizations in that space subscribe to a diverse but common set of values, worldviews and touchstones when it comes to the tools and ideas they have. I think it’s important to do some ‘cross-talk’ and ask, what can we learn from the mega-church movement, from the high-tech industry, from Serbian and Egyptian civil resistance leaders? 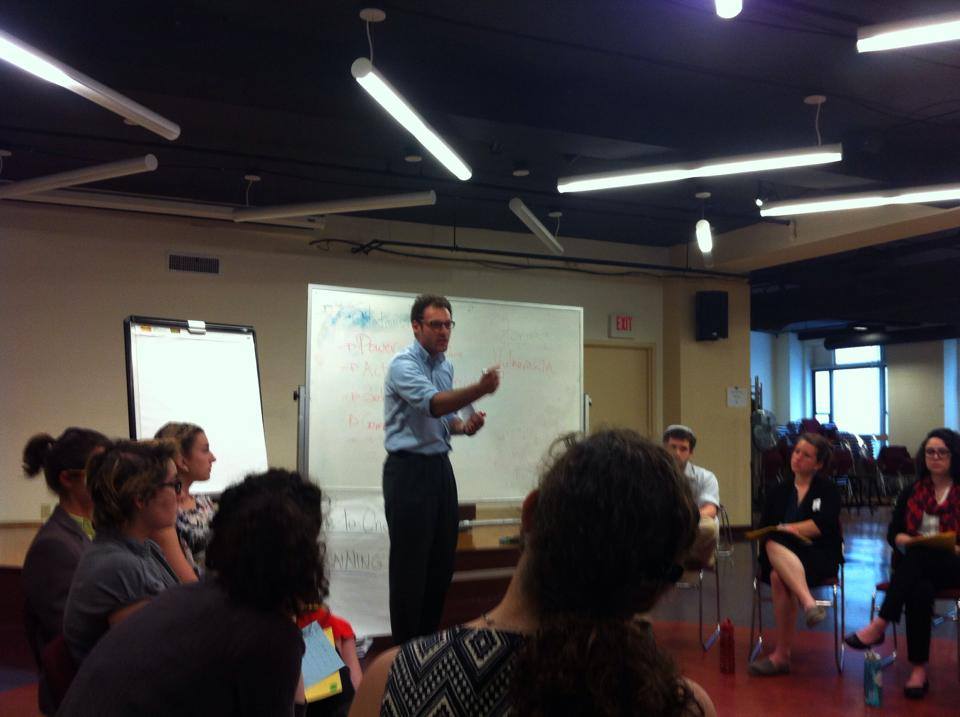 What do you think determines success in social entrepreneurship and how do you try to teach that?

One of the things I’m hoping to instill in the students I’m working with here is that social change work is fundamentally work that connects the head, the heart, the body and the spirit – you can’t do this work if you’re not operating on all of those levels. I also hope to impart the idea that to do your best work, you need to be firmly rooted in who you are, where you come from, who your ancestors were, and how systems of power, oppression, and capital affect you and your family. Whether it’s as a white person doing racial justice work or as a first-generation immigrant doing immigration reform work, being able to really sit back and use your own story, your own place in things, to figure out the best way to take action and make an impact – that’s really square one. From there, there’s a world that opens up in which we can learn all sorts of things about building successful teams, managing teams, growing things to scale. But, fundamentally, if we don’t have a capacity to reflect and build authentic and deep relationships of care and courage, then we get nowhere. So, in some ways, building the biggest organization starts with some of the simplest, most human of actions.

What was it like to be selected as a Social Innovation Fellows in 2009? Did you have any takeaways that still inform your actions or way of thinking now?

Oh, when I was here! [Laughs] It was cool! And this is why I love the Swearer Center – the Swearer Center has a perspective that higher education is fundamentally about the public good. And that the highest education we can aspire to is about doing powerful community work that serves others and develops ourselves. I think I’ve found common purpose here because during my time at Brown, I was spending my weekends farming up in Cumberland and my time after class teaching English and doing immigrants’ rights work in Olneyville. Some of the best teachers I got were these immigrant organizers, these rural farmers. To have a center and increasingly, a university, that recognizes that the work we do in the world is in some way the most educational because it’s experiential, and can wrap programs and courses around that fundamental learning experience – that is just brilliant. There needs to be way more of that. So my experience back in 2009 was one where the work I was doing around trying to change the food system both here on campus and more broadly was validated by the University. Getting the award was essentially them saying, this work is important, this work is worthy of support and of your time. The funding, and the mentorship, and the community that the Swearer Center was able to build to support us in that way – that was huge. Absolutely huge.

Have you witnessed any changes or new challenges since you started your organizing work?

In some ways, I’d say we’re in really different times. I graduated high school in 2004. That was the year after Bush had invaded Iraq, despite the largest global protests in the history of our planet – literally 10 million people came out on the same day. And following that, in 2004, Bush was re-elected, despite not gaining the popular vote. I think many people who cared about social justice were really defeated. At that time, I, for one, concluded that maybe social movements, organizing, and all the rest of that, didn’t have the impact that I thought it would. But folks of this generation have grown up witnessing the Arab Spring, the Occupy movement, Black Lives Matter and #MeToo – they’ve gotten a front-row seat to some very powerful and historic moments. I think this generation has seen the power and possibility of what happens when people rise up. My interest is to dig into the complexity and really understand the impacts that these events have had on our society, and the real, concrete shifts that have happened in our culture, in our institutions, because of them. And I’m interested in how we can participate in that generations-old project of trying to build a better world in the many, many forms that takes.

Is there anything that we haven't covered that you'd like to touch on in regards to your residency?

I’ll just say this, I think we’re in a unique moment in history. There is a lot of ferment in this country, there’s a lot of challenge, and I firmly believe that institutions like Brown – that have such incredible resources and opportunities to educate leaders of this generation, and that for generations profited off the exploitation of enslaved people, and excluded women and people of color in a variety of ways – both for the opportunities we have and the legacy that we’ve inherited, we have a duty here to prepare students to engage in some of the most important social justice struggles of this lifetime. And I’m excited to work in Common Cause with the Swearer Center to do that, and I hope that together we can continue to lead the University to really fulfill its mission in that regard.

This interview has been shortened and edited for clarity. Images via David Schwartz.