For the history and education studies concentrator, a summer-long dive into the lives of early Unitarians in England meant the chance to contribute to faculty scholarship and an upcoming book.

PROVIDENCE, R.I. [Brown University] — Over the last three years, rising senior Molly Sandstrom has developed a research interest in how factors of identity, such as gender, class and education, impact the beliefs and behaviors of historical figures. This summer, an UTRA project on England’s early Unitarians allowed her to delve into that interest while extending her scholarly relationship with a faculty member that began in her first days as a Brown undergraduate.

In her first semester on campus, she took a course with her academic advisor Joan Richards, a history professor and the director of the program of science and technology studies. Now Sandstrom, a double concentrator in history and the history-and-policy track of education studies, is contributing her perspective to a major research project by Richards.

Richards is writing a book titled “Generations of Reason,” which examines the lives of several generations of notable historical figures active in the early Unitarian church in England: Theophilus Lindsey, a clergyman who founded the country’s first openly Unitarian congregation, his mentee William Frend, and Frend’s daughter and son-in-law Sophia and Augustus De Morgan, who had a daughter named Alice.

Richards is focusing on the way the family, bound by a matrilineal line and a “commitment to a view of reason rooted in the philosophy of John Locke,” understood reason as both an ideal and an idea with practical implications for how to live and behave, according to her research statement.

Sandstrom spent the summer researching the same family, but looking at it from a different angle.

Sandstrom zeroed in on the “historical implications of masculinity and femininity and… how socialized identities impact the beliefs and behaviors of historical figures,” she said.

“Who these people were, how they saw themselves and how the rest of the world treated them all matters when considering the mark they left on the historical record,” Sandstrom added.

The pair found ways to join the student’s interest with the faculty-led project, Sandstrom said. She spent the summer working in the University’s libraries, “doing lots of reading… ranging from primary source letters between William Frend and his sister, to drafts of chapters from Professor Richards’ book, and piecing together evidence to draw my own conclusions about how much socialized identity matters.” 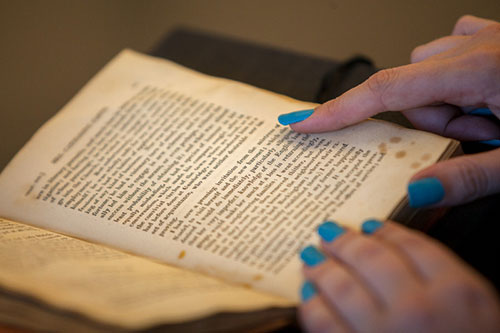 Sandstrom met with Richards every afternoon to have “frank discussions” about the research.

“I was fully able to share my findings and my ideas,” Sandstrom said. “I think how Professor Richards writes about gender and the interactions between men and women, parents and children, the rich and the poor, is changing to reflect the daily conversations we have. We are sharing the same sources — I am just reading them through a different lens and for a different purpose.”

Sandstrom, who presented her findings in a poster session in early August, found that Frend and Augustus De Morgan, despite being considered radical for rejecting the Anglican church in favor of Unitarianism, were able to remain “gentlemen,” rather than outcasts in British society, by “perfecting important markers” of identity, ranging from manners to dress code and social circle.

England’s early Unitarians, Sandstrom found, were “not as free to act as they were to think,” and that constrained behavior deepened over time. By the time Frend’s granddaughter, Alice, was growing up in the Victorian age, she was expected to model values including obedience and truthfulness.

Richards agreed: “In the early Victorian Age, when Alice was brought up, conforming to rigid social stereotypes was seen as the price of free thought.”

Beyond the research itself, the project proved a worthwhile experience for Sandstrom. She said: “I have gained a lot of confidence and experience from the UTRA. As I go into senior year and finish up my history concentration, I believe I will be much more likely to use and engage with the sources Brown has in its various collections.”

There may even be, Sandstrom said, the potential for a capstone project on the topic.

August 26, 2016
A progression of summer experiences with faculty has left the rising senior with an expanding set of research skills and medical school aspirations.
Read Article
Arts and Humanities

August 26, 2016
A summer class, a transfer to Brown and an inspiring professor led rising senior Jacob Ihnen to an UTRA project focused on the rhetoric of Abraham Lincoln.
Read Article
Science and Technology

August 26, 2016
With a passion for problem-solving, the engineering concentrator is focused on the fundamentals of light and playing a role in promising research on next-generation solar cells.

August 26, 2016
The rising sophomore took part in an intensive research project that not only piqued her interest in colonial-era history, but diversified her academic interests.
Read Article