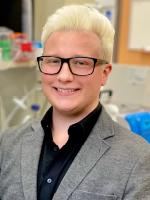 Chitinase-3-like protein 1 (CHI3L1) is an inflammatory protein that has been documented to be a powerful biomarker in Alzheimer’s Disease (AD). However, how CHI3L1 functions in the brain and influences neuroinflammation and AD pathogenesis isn’t fully understood.

Working in the Yu-Wen Alvin Huang laboratory, Ph.D. candidate in the molecular biology, cell biology, and biochemistry program Kevin Connolly is investigating the use of human stem cell technology to study the molecular and cellular fundamentals underlying neurodegeneration and brain aging, specifically in the context of Alzheimer’s.

“My overall goal is to define a neuronal signaling mechanism whereby CHI3L1 regulates glia-derived neuroinflammatory responses and the resultant neurodegeneration – thus providing a role CHI3L1 plays in the brain, departing from being merely a biomarker for AD and neuroinflammation” said Connolly.

“I’ve always been intrigued by the sciences, particularly biology. My research as an undergraduate opened my eyes to new areas of biology where I found great interest and enjoyment - I then began to think that research would be a potential, rewarding career. I continued researching during my master’s studies which overall cemented my desire to continue in academic research.”

Kevin received his bachelor’s degree in biology from Eastern Connecticut State University and master’s degree in biomedical sciences from Quinnipiac University. His award is supported by the JBB Graduate Fellowship Fund and the Mahoney Fund. 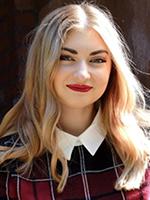 In 2020, an estimated 21.0 million adults in the United States had at least one major depressive episode, representing 8.4% of all U.S. adults. Mentored by professors Linda Carpenter, Tara White, and Jennifer Barredo, Ph.D. candidate in the neuroscience graduate program Meghan Gonsalves is working to understand how neuromodulatory treatments for depression — the alteration of nerve activity through targeted delivery of a stimulus to specific neurological sites in the body — work in the brain.

“It is my hope that my research will optimize transcranial magnetic stimulation (rTMS)  delivery and its clinical benefits for people with major depressive disorder, and help to open the doors for personalized medicine approaches to psychiatric care,” said Gonsalves.

“I have been interested in studying major depressive disorder and the neural mechanisms underlying corresponding treatments after witnessing this illness impact my loved ones. As an undergrad, I made a personal commitment to dedicate my career to finding an eventual cure for depression.”

Gonsalves received her bachelor’s degree in cognitive neuroscience from Brown University and master’s degree in behavioral and social health sciences also from Brown. Her award is supported by the Dr. Daniel C. Cooper Graduate Award and the Charles A. Dana Graduate Fellowship Fund. 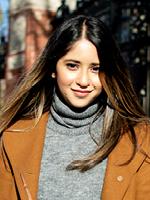 Adolescence is a time of rapid change in our social learning pathways. During these years, the efficiency of information processing and neural connections between the prefrontal cortex and other regions of the brain are strengthened. Amrita Lamba, a Ph.D. candidate in the Department of Cognitive, Linguistic, and Psychological Science is working to identify the social learning mechanisms that can become disrupted in adolescence, possibly resulting in anxiety-related mental states, behaviors, and thinking.

Mentored by Oriel FeldmanHall and Michael Frank, her research bridges social neuroscience with computational methods to mathematically formalize how we filter down and translate inputs from our social world into adaptive behavior.

“Our long-term well-being is tightly intertwined with the beliefs we hold about others. This requires continuous adjustment and recalibration of our behavior to be in sync with the social world around us,” said Lamba. “With recent advances in computational modeling techniques, we now have the ability to exploit common algorithmic languages and tools to move these abstract social learning questions into a controlled experimental space. My hope is that by returning to the basic science of mental illness, one day we can deliver more precise interventions that are tailored to the individual.”

Lamba received her bachelor’s degree in neuroscience and English from University of Toronto St. George and master’s degree in psychology from College of William & Mary. Her award is supported by the Robin Chemers Neustein ’75 Graduate Fellowship Fund. 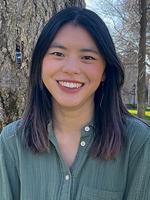 Nearly one million people are living with multiple sclerosis (MS) in the United States, a chronic disease affecting the central nervous system. In MS, the immune system attacks the myelin sheathing in the brain and spinal cord causing inflammation which destroys nerve cell processes and myelin – altering electrical messages in the brain.

Working in Sonia Mayoral’s lab, Ph.D. candidate in the neuroscience graduate program Molly McQuillan is working to better understand the neuroprotective effects of oligodendrocytes in the context of axonal degeneration. Using both in vivo rodent models and in vitro co-culture assays, she’s hoping to determine whether oligodendrocytes, and subsequently myelin, protect axons during degeneration and interpret the nature of this potential protective signal.

“Though our work is currently focused on injury models, the results could nevertheless have potential future implications for better understanding mechanisms of neurodegenerative and myelin-associated diseases such as MS,” said McQuillan. “I’ve had a long-standing interest in neurodegeneration from a disease/disorder standpoint, so this research has enabled me to continue studying neurodegenerative processes but from a new perspective and via a cell type that some might say is often overlooked. “

McQuillan received her bachelor's degree in biology from Bard College. Her award is supported by the Howard Reisman ’76 Family Graduate Fellowship Fund and the Mahoney Fund. 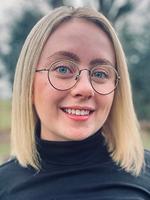 The posterior parietal cortex (PPC) of the brain plays an important role in planned movements, spatial reasoning, and attention. Combining novel behavioral paradigms and chemogenetic techniques in the rat model, Wise — Ph.D. candidate in the Department of Cognitive, Linguistic, and Psychological Science — is working in Rebecca Burwell’s  lab to investigate whether this region of the brain is important for both spatial and social cognition, and if the PPC is necessary for information transfer across these domains.

“Prior to grad school I learned how evolution has not only shaped our physical traits, but also our cognition, and that through behavioral neuroscience it is possible to investigate which cognitive abilities are shared across species,” said Wise.

“The goal of my research is to not only shed light on the role that this region of the brain plays in spatial and social domains, but also to demonstrate how powerful neuroscience tools available in rodent models can be used to study complex cognition. I further hope that my research contributes to growing evidence that physical and abstract representations are managed similarly in the brain.”

Wise received her bachelors in ethology from Bucknell University. Her award is supported by the Mahoney Fund and Macklin Bequest. 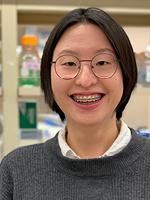 “With the increasing aged population, age-associated neurodegenerative diseases such as Alzheimer's disease (AD) have become an ever more pressing public health issue,” said Yu. “Despite the rising number of those afflicted by the disease, there is still no effective treatment for AD. I hope to understand the changes of the hypothalamus, a brain region that controls sleep, eating, stress response, and body composition, in AD, which will help develop interventions to treat AD.”

Yu received her bachelor’s in biology from Shanghai Jiao Tong University, China and master’s degree in data science from Brown. Her award is supported by the Dr. Achilles Frangistas Fund for Neurodegeneration Research and the Mahoney Fund.