Definition of a Subaward

A subaward transfers a portion of the research or substantive effort of the prime award to another institution or organization.   It is a written agreement with a third party for the acquisition of services or goods, or for the conduct of prescribed activities or functions under the prime award where the subrecipient has responsibility for programmatic decision making and measurable performance requirements related directly to the prime award.  A subaward is written under the authority of, is consistent with the terms and conditions of the prime award (a grant, contract or cooperative agreement).

The determination of the potential need for a subaward to a business/organization is normally made at the proposal stage. The proposal package submitted to OSP in which a potential Subrecipient is identified requires the inclusion of the following:

Letter of Intent  must be signed by the Subrecipient authorized representative and should include an intent to accomplish the work as outlined in the scope of work, the Project title, the period of performance and the funds requested

Budget consists of Subawardee total costs, which includes direct and F&A costs, if applicable. Direct Costs should be itemized by major cost categories, e.g., salary, fringe benefits, equipment, travel.  Facilities & Administrative (Indirect) Costs must be based on a valid current F&A Rate Agreement with the Federal government.  The current F&A rate must be on file at OSP prior to issuance of the subaward.

Budget Justification that explains both the necessity and the basis for the proposed costs must accompany the budget.

Scope of Work provides sufficient detail of the technical and programmatic work to be accomplished by the Subrecipient. Note that the scope of work statement for federal subawards will be published in a public database per the Federal Funding Accountability and Transparency Act.

Other Documentation as required by the sponsor.

Subcontracting with a Foreign Organization

Brown’s  Subrecipient Monitoring procedures require that OSP collect from each subrecipient1 entity a Subrecipient Profile Questionnaire, the most recent completed audit or financial statement, and the subrecipient organization’s indirect cost rate agreement if they have one.  OSP uses these items to perform a risk assessment of the subawardee.  We strongly recommend that the PI/Departmental Research Administrator gather these materials from foreign entities at the time of proposal submission.  Completed materials may be forwarded to [email protected].

Additionally, if the prime source of funding is a federal agency, the subrecipient must have a DUNS number, an NCAGE code, and an active registration in SAM.gov.   All new subrecipients and the subcontract PI are screened by OSP in the Visual Compliance database.

DUNS stands for Data Universal Numbering System and there are two ways to get a DUNS number.

NCAGE is the NATO Commercial and Government Entity Code.  The new organization can obtain a NCAGE Code here.

Once the new organization has a DUNS# and NCAGE Code they can apply for SAM.gov registration. Note: the name and  address used for DUNS and NCAGE must be the same legal name and address!

SAM.gov is the System for Award Management and all organization receiving federal funding, including through a subcontract, are required to register in SAM.gov.  The registration process has many steps which are explained well in the Quick Start Guide.

1The terms subrecipient/subawardee/subcontractor are all used to designate the entity to which Brown University issues a contractual agreement to carry-out a portion of the research project’s scope of work. 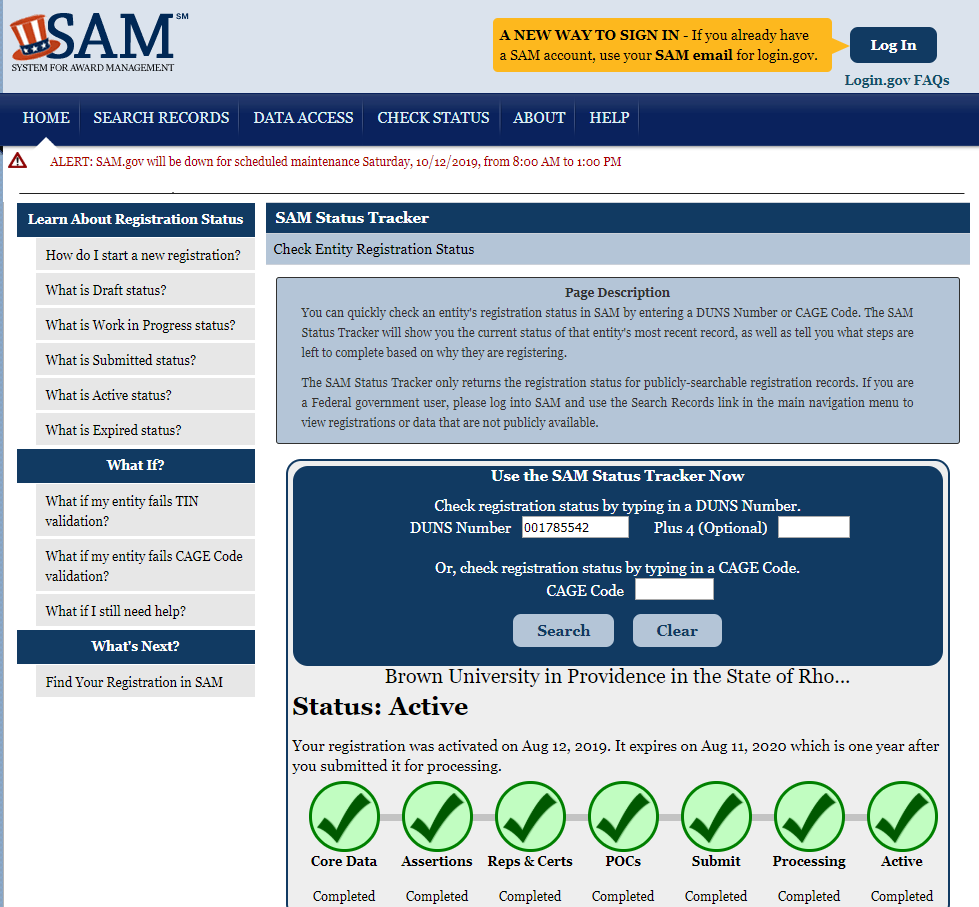 When a new award with subaward(s) is made to Brown, the OSP Grant & Contract Administrator will confirm with the Principal Investigator (PI)/Department Administrator (DA) how the subaward(s) should be issued.  The email will also request a Subaward Order Form for each subcontract along with revised budget and SOW as necessary.

Subrecipient Monitoring takes place throughout the life cycle of a sponsored project.  Information is gathered at the proposal and award stages as well as during an annual review process to ensure Subcontractor performance of the work and compliance with regulatory requirements. The University is required to verify Subrecipient eligibility and managing high risk Subrecipient.

A comprehensive risk assessment is completed by OSP prior to issuing the subaward agreement. Elements of the review include inspection of the following - Subrecipient organization’s entity registration in SAM.gov ; current F&A (Indirect cost) Rate Agreement; Audit, Financial Report(s) and/or Tax Returns; a signed Subrecipient Profile Questionnaire.

OSP maintains the University’s data and registration information on the federal government website System for Award Management or SAM.gov.  This registration is mandatory for Brown and all of Brown’s research subcontractors in order to do business with the federal government and to receive federal ‘flow-through’ funding.  We have observed in recent months that there is a 6-8 week timeframe for new entities to complete the registration. If you are planning a subcontract with an organization that has not previously received US federal funding, we recommend that the SAM.gov registration be completed at the time of proposal submission. This is particularly true for foreign organizations.

Screening of the subaward organization and subaward Principal Investigator is performed by OSP through the Visual Compliance database to determine if there is any restriction on receiving federal funds or doing business with Brown.  Additionally, the entity may be screened through FAPIIS (Federal Awardee Performance and Integrity Information System) which provides information about an organization’s past performance under federal awards.

If the Subrecipient is deemed as high risk more frequent oversight is required throughout the life of the subaward. OSP will work closely with a PI to learn in greater detail about the nature of the work being performed and the subrecipient’s technical and business capacity to perform.  Corrective action plans for identified high risk areas may be requested.

Throughout the Life of the Award

The subrecipient is instructed to send invoices (not more frequently than monthly) directly to the responsible PI and DA.  The PI must review and approve the invoices.  The Department Administrator then forwards the invoices to Accounts Payable for payment. Please refer the the Subaward Invoicing Monitoring Best Practices for more information on this process.

During the term of a subaward, the PI is responsible for monitoring the activities of subrecipients, as necessary, to ensure that federal awards are being used for their authorized purpose and that performance goals are achieved.

Subaward modifications are used to extend the period of performance, to increase the funded amount to append additional tasks to the Scope of Work, or modify other terms and conditions.

When a prime award, that includes subcontracts, is modified, a modification to the subaward(s) may be required. Grant & Contract Administrators will notify the department via e-mail (as indicated in the section on new subawards) and request that the department submit a Change Order in Workday to OSP.  The Change Order should include the Subaward Order Form which indicates how the subaward should be modified.  Attach supporting documentation for any changes to the subaward if different than what was proposed.

“The Federal Funding Accountability and Transparency Act (FFATA) requires information on federal awards (federal financial assistance and expenditures) be made available to the public via a single, searchable website; www.USASpending.gov.  All FFATA reporting is completed by the Office of Sponsored Projects in accordance with the regulations below:

In accordance with Federal Acquisition Regulation clause 52.204-10 (Reporting Executive Compensation and First-Tier Sub-contract Awards), Prime Contractors awarded a federal contract or order are required to file a FFATA sub-award report by the end of the month following the month in which the prime contractor awards any sub-contract (including Vendor Agreements) greater than $30,000 and any modifications of $30,000 (cumulative) thereafter.

In accordance with 2 CFR Chapter 1, Part 170 REPORTING SUB-AWARD AND EXECUTIVE COMPENSATION INFORMATION, Prime Awardees awarded a federal grant are required to file a FFATA sub-award report by the end of the month following the month in which the prime awardee awards any sub-grant equal to or greater than $30,000 and any modifications of $30,000 (cumulative) thereafter.

The following data is required from subrecipients for all grants, contracts, and vendor purchases on contracts that meet the FFATA requirements:

a. More than 80% of annual gross revenues from the Federal government, and those revenues are greater than $25M annually and

b. Compensation information is not already available through reporting to the SEC.

If the sub-award is not continuing as proposed and ending early, the department should notify OSP and complete the Close Purchase Order Request form to close the purchase order and send to [email protected].  The Grant & Contract Administrator will approve the Change Order and send to Purchasing and change the status in the Coeus record to “Closed.”