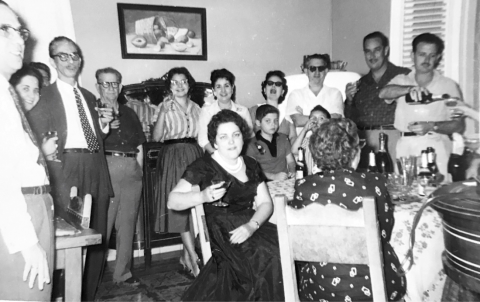 All of the memories that I have of my grandparents’ house, an early-century mansion of eclectic architecture in the Vedado neighborhood, are related to the incredible amount of artifacts that I have usually found in it . My generation, born in the seventies, and all subsequent generations, grew up in a domestic material environment that, before turning to ruins, had been filled with all sorts of artifacts. Broken, unused, useless, wasted, mutilated objects were saved in hopes of a “second time around” in which they could serve to replace, complete, repair, or simply “invent” a new materiality, a temporary solution to persistent scarcity.

The Cuban people’s relationship with the material world began to change in 1959, when the new government imposed a tariff on imported luxury goods. An undoubtedly more dramatic twist was the rationing of a series of staple food items enacted in 1962 in order to deal with a shortage resulting from poor socialist management. The following year, the Provision Control Office (known as OFICODAS) was created, and a series of industrial goods began to be rationed through coupons distributed in workplaces or, by default, by the Committees for the Defense of the Revolution (CDR) that by this time already existed in each neighborhood.

Since then, with the same enthusiasm with which they had celebrated the triumph of the Cuban Revolution, the Peasants’ Gathering of July 26, 1959, the victory at the Bay of Pigs on April 21, 1961, or the carnivals that recycled floats and streamers every year; the same enthusiasm with which they would later celebrate the opening of Pabellón Cuba and the mosaics of La Rampa in 1963, the Salón de Mayo in 1967, the first Congress of the Communist Party of Cuba (PCC) in 1975, or the Soyuz-38’s return from space on October 10, 1980, manned by the first Cuban cosmonaut, residents of the island dedicated themselves to saving everything that they thought may be of use at another time. Three decades were enough to amass a considerable number of objects before the fall of the socialist camp in 1989 and the disintegration of the Soviet Union in 1991 would cause a gargantuan economic crisis and force Cubans to turn to their material reserves.

Since 2012, the collection Cuba Material and the homonymous digital archive have worked to recover and preserve the material culture that survived the post-Soviet period, in which the residents of the island consumed almost everything they had saved during the previous decades. It is a collection of objects that were kept for their sentimental value or political clout, because they still worked or were stockpiled for when things got worse--that’s the twisted way the future presented itself. In the most remote corners of closets and barbacoas (or split rooms), these items ended up lost or buried among other junk. I recently discovered a box of scented soaps in my grandparents’ house that was acquired in the 1980s on the state parallel market. No one remembered these soaps during the crisis of the nineties when we did not even have a sliver with which to bathe ourselves. When I began to build the collection and the archive in 2012, Cuban society had already swallowed and digested much of the material culture of socialism and vomited the indigestible onto sidewalks, into trashcans, junkyards, second-hand stores, and the internet.

Cuba Material is a collection of objects that circulated in Cuban domestic spaces between the day of the triumph of the Revolution on January 1, 1959, and the collapse of the Soviet Union exactly 30 years later. Its visible face is the homonymous digital archive hosted on the domain cubamaterial.com in blog format. So far, the collection has several thousand objects, including furniture, appliances, stationery, clothing, food containers, medals, obtained by myself or donated by contributors and readers of the blog.

Some of these items, like school notebooks, for example, allow us to examine the more or less subtle ways in which the political ideology of the Cuban state was transmitted by the institutions responsible for educating and socializing children. Similarly, the writings and sketches occasionally contained in these notebooks attest to personal plans and ambitions, which in some cases were associated with elements of criticism of the political and social reality. On the other hand, the baby clothing and toys that are now part of the collection’s inventory exist because many families kept them, thinking of grandchildren and great-grandchildren to come. These objects are indicative of alternative solutions to scarcity and speak, in many cases unconsciously, to the lack of hope that Cubans had already began to project on the future of communism in the early 1970s. They also speak to the increasingly insurmountable distance which separated said growing skepticism from official discourse.

Some objects, such as practice workbooks, textbooks, and practical exercises for students of Ana Betancourt’s sewing schools, allow us to trace the practices and methods of the new revolutionary institutions and programs. Many pieces of clothing have also made their way into the collection: the guayabera shirts transformed by CONTEX and La Maison into women and children’s garments, clothing associated with commercial brands such as Taíno, Siboney, and Caonex, some of which also identify household appliances of a Soviet design. These clothes are representative of nationalist discourses that helped legitimize the Cuban state socialist regime, presenting it as an inheritor of the cultural roots that have breathed life into the myths of the cultural heritage of the nation.

In turn, the household appliances manufactured in the USSR or assembled in Cuba from Soviet technology--radios, fans, televisions, washing machines, refrigerators--illustrate ideals of progress and modernity that defined the 1970s and 80s, ideals more visible at a discursive and symbolic level than what manifested in the meager commercial reality. However, more luxurious items, particularly cars and air conditioners, reveal mechanisms of differentiation and inequality promoted by the government itself in order to satisfy the material demands of the new socialist elite, who were the main beneficiaries of these indicators of “progress.”

In the same way, some elements of the collection attest to the efforts of the Cuban state to promote socialist ideology and its institutions through everyday forms of materiality such as Pionero erasers and portable radios of the same brand. However, other practices, such as the emergence of friki fashion, and the catalogues of exhibitions of critical art, like that of the group La Campana in the city of Victoria de Las Tunas, represent countercultural practices. We can recognize in the latter the emergence of more or less veiled criticisms of the status quo. Other objects speak to the aesthetic and cultural diversity that characterized the material environment of Cuban socialism, generated by the coexistence of a new socialist materiality with consumer goods bought in the pre-revolutionary years or colonial times. This diverse material culture also manifested in the introduction, sometimes through illicit channels, of products acquired in capitalist countries, as well as in the creation of primitive artifacts, generally rustic in appearance, invented to ease scarcity.

Documents from the Cuba Material collection allow us to explore the impact of national and international sociopolitical events on individual and collective psyches, as well as within the framework of familial relationships. Thus, emigration and internationalism can be better understood by examining the correspondence between Cuba and the United States or the Soviet Union that family and relatives exchanged, and the aesthetics of some socialist institutions can be reconstructed through graduation diplomas, certificates, report cards, restaurant menus, maps, guest cards, and tourist brochures. In many cases, these objects or documents identify specific historical dynamics, like identity documents for foreigners or I.D. cards for national civil associations such as  the Asociación Nacional de Pesca Deportiva, essential for fishing off the coast and, therefore, coveted by those who wanted to escape by sea. Likewise, the MINCIN toy cards were distributed to employees of the Ministry of Domestic Trade (MINCIN) who participated in the annual sale of toys in 1971, before the OFICODAs took charge of organizing these purchases, documents some historical particularities of this event.

As I have suggested in relation to the exhibition Pioneros: Building Cuba’s Socialist Childhood, all of these objects reveal a politicized material culture defined by the state’s infiltration of the domestic sphere.[1] This politicization is observed much more directly, if possible, in the awards, invitations, and certificates granted to PCC militants; to members of the army, the militia, and the CDRs; to outstanding, overachieving, or internationalist workers; to students of merit; and to any other individuals identified as the political vanguard of Cuban socialist society. These medals and awards are essential to understanding the mechanisms through which the Cuban totalitarianism was legitimized and finally transformed into the single party system and market economy that now organizes life in the country. Once proudly treasured by their recipients, they are now sold in the Plaza de Armas and other markets of vintage souvenir trinkets as mementos of a past that preceded the decriminalization of the U.S. dollar and the development of international tourism.

This effort to document the material dynamics of Cuba’s most recent past, which drives the Cuba Material collection, both benefits from and competes with the dismantling of the materiality of socialism that has been occurring in recent years on the island. These material residues, which continue to crowd domestic spaces, now for sale in real and virtual secondhand markets or used to decorate paladares (or privately owned restaurants), are one of the most important resources we, as researchers, have to document and understand the Cuban state socialist regime. ​

Near the State Theater in Prague, halfway between the Wenceslas Square and the Old Town Astronomical Clock, in a wing of the second floor of a majestic building, is the Czech Museum of Communism, one of many museums of its kind erected in the metropolises of Eastern Europe. Much criticized by academics, this dusty depository of old objects--Manichaean and surreal, mercantilist and mournful--is almost all that remains of a country that disappeared after the fall of the Berlin Wall and whose capital now prospers, invigorated by the touristic appeal of its Gothic architecture and interwar modernist buildings. I want to think that the digital archive Cuba Material and the boxes and albums that fill the closets in New Jersey and Havana where I keep the homonymous collection are the seeds of a future Museum of Cuban Socialism. While this project solidifies, these objects remind us that Icarus, besides being a mythological character, was also a Hungarian bus that circulated in Cuba, and that beans were not always sold in bulk at Cuban stores.

[1] On September 17, 2015, Parsons School of Design unveiled this exposition, curated by María A. Cabrera Arús and Meyken Barreto in the Arnold and Sheila Aronson Gallery.


Photo: “Havana family celebrating the arrival of La Caravana de Libertad (The Caravan of Freedom) to Havana, with Fidel Castro at the head of the rebel army." January 8, 1959. Photo from the author’s personal collection.