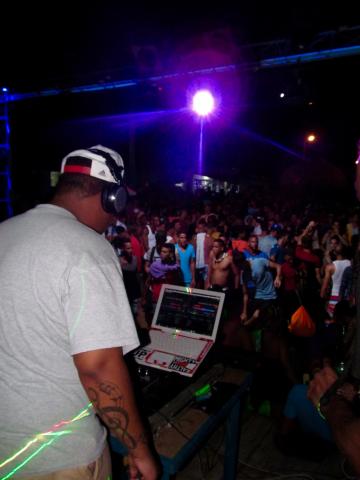 On a dimly lit street corner outside Club Tropical in Havana’s Vedado neighborhood, a group of young Cuban men stood with the bar’s manager trying to bargain down the entrance fee. The cover, set at three convertible pesos (CUC, roughly equivalent to $3 USD), was more money than the men were able to spend given they had already bought rum earlier in the evening. So, in a tactful manner, one guy promised Tropical’s manager that he would convince three young American women to enter the club at full price if the fee for each Cuban was lowered to just 1 CUC. Without much hesitation, the manager agreed, seeing this as an opportunity to not only secure a few dollars but also to bring women into his male-dominated, yet pretty empty club.

Unaware of their role in the deal negotiated before them, the Americans skipped down into the grungy basement where DJs took turns behind the computer in an ad hoc manner and a few scattered bodies swayed and bopped to the pounding electronic tracks. The foreign women whispered to each other, gossiping about the emptiness of the club’s dance floor and wondering if they could bother the DJ to play hits from home. Young Cubans tried to adjust and figure out how to move their bodies to the pulsating electro-rhythms when what was familiar was reggaetón and its back-to-front dance styles. Some Cubans resisted entirely, sitting in plastic chairs in the corner only to get up for Yomil y el Dany’s newest hit. Meanwhile, Club Tropical’s manager loitered outside on the corner of Línea street, happy that his club just received a little more business and hopeful that electronic dance music (EDM) would start to sell.

But, during a DJ’s basement session in April 2017, Tropicalito, as it is affectionately known, was shut down indefinitely by the local consejo popular, a municipal governmental body focused on promoting local leadership and community political participation, due to claims that the neighbors had complained about the noise and the club’s alternative crowd. Michel Matos, former organizer of Rotilla, the well-known annual alternative musical festival at Jibacoa, commented about Tropical’s closure, “It was meant to discourage (or maybe, only to motivate us to emigrate)...Perhaps because these young people are too different (or authentic) for some. And those squares can’t stand it. They don’t want them nor do they understand them.” And so, Cuban DJs and their followers were forced to move elsewhere once more in search of space in Havana’s leisure landscape to grow a music that seems anything but Cuban to most.

Today, EDM is left out of the curriculum of Cuban art schools, absent from most foreign scholars’ analyses of Cuban culture, and not yet taken seriously by most state cultural institutions on the island. A few foreign publications like VICE have documented the recent growth of Cuban EDM culture but these sources continue to center their stories on the “resilience” of Cuban DJs in spite of technological scarcities and limited internet access. It is only in the last few years that this community has established a digital presence through Facebook groups like Coocuyo and YouTube pages. Nonetheless, electrónica has a much longer history than its “boom” in the last few years would suggest. This history, which reaches back to the Special Period, an era of social and economic crisis that began after the fall of the Soviet Union, is intertwined with stories of foreign exchange and is often overshadowed by better documented underground genres like rock and rap.

My own research is based on interviews with Havana’s producers and DJs and experiences at EDM parties and state-sponsored festivals. This fieldwork led me to ask: What are the challenges faced by electronic dance music in Havana’s music scene? How do the developing relationships between private business owners and independent DJs test the limits of the official cultural frameworks? And, finally, how can a study of Cuban EDM help us map Havana’s contemporary leisure landscape, trace alternative culture, and unveil stories of cultural exchange in a post-Special Period moment?

We can trace the roots of today’s EDM community to the Special Period, a period of economic collapse after the fall of the Soviet Union that gave way to the growth of an underground grunge party scene. One producer reflects, “Because we had nothing and lacked so much, we partied a lot.” In homes and dark basements, DJs tested the waters and blended their techno sound with the already marginalized rock genre. In 1998, German DJ Hell and other foreigners arrived onto the Cuban underground scene, acting as mentors for a community unfamiliar with European rave culture. DJoy remembers, “They taught us all what electronic music parties were about,” specifically that “you didn’t need to take drugs to listen to this music.” But, more importantly, these German visitors left their Cuban counterparts with critical production tools like cassettes, mixtapes, vinyls, and CD players, technology that sustained the EDM community into the next decade.

In this same period, Cuban Americans living in Miami brought house music to Havana, and this EDM sub-genre took hold of queer party spaces. For weekends on end, parties took place in open-air spaces on the margins of Havana. DJs bumped house music until the early morning and tourists mingled with the Cuban queer community (Moshe Morad, Fiesta de Diez Pesos, New York: Routledge, 2016). In Special Period Havana, private parties were valued as a secret refuge for marginalized youth, and the clandestine nature of rave culture gave way to an EDM scene that would endure outside of official and popularized spheres for years to come.

Today, when it comes to securing funds and space, electronic music straddles the lines between the official and unofficial cultural realms, exhibiting a sort of semi-autonomy common to contemporary alternative culture. Producers organize themselves around the now muddled terms “commercial” and “underground,” although most work within the nebulous areas between these two categories. Cuban EDM represents a dynamic space in which young cultural producers work both within and beyond the confines of the revolutionary cultural apparatus to advance this alternative music scene. Many EDM producers maintain a relationship of convenience and often necessity with the state, but they lean equally on foreign sources of funding and private employers in order to move their projects beyond the confines of their living rooms and into Cuban nightlife.

Officially, the Asociación Hermanos Saíz (AHS), the youth vanguard institution, and the Laboratorio Nacional de Música Electroacústica (LMNE) have opened their doors to young DJs by offering memberships, annual musical production classes for amateurs, and limited access to performance spaces like the Madriguera. The AHS has opened the old workers’ recreation center Balneario Universitario as a space for DJs to grow their music and audience. But state venues like this one have irregular nightlife schedules, opening just three or four nights each month, and pay their musicians only a few dollars for their work, making this type of leisure space largely unpopular.

Alternatively, private bars and nightlife promoters like SARAO and Don Cangrejo are partnering with DJs in an effort to create a luxury nightlife experience for both foreigners and the growing class of Cubans with dollars to spend on leisure time. Cuentapropistas use their bar or restaurant licenses as permission to create a commercial club space as they extend their hours of operation and host profitable events like reggaetón concerts. In doing so, these venues raise their cover prices to three, five, or even ten CUC, amounts out of reach for the ordinary Cubans who earn the official state wage of 30 CUC per month.

Given the rising costs of nightlife in Havana and a growing network of private employers for cultural producers, it is now possible for DJs who straddle the line between the underground and commercial spheres to earn a modest living through EDM. Two DJs, Obi Gonzalez and Lejardi, commented that they can support themselves by working just two gigs a week. Thus, some EDM producers work for private bars where they earn enough money in one weekend to sustain themselves for two weeks. Others, however, only have the chance to play without pay in public, run-down clubs. This juxtaposition reminds us that in Cuba today, neither the public nor private music sphere are necessarily egalitarian.

Beyond the figure of the DJ, a study of electrónica also reveals the growing exclusivity of Havana’s leisure landscape. The Cuban economy, increasingly focused on tourism, has displaced its youth generation from the workforce, leaving ordinary Cubans with little to no money in their pockets and a persistent feeling of exclusion. Youth who do not have personal remittance streams, training in entrepreneurial skills, or sufficient social capital are unable to find work in an economy in which opening a private business is often predicated on one’s skin color and access to capital through transnational familial networks. The economic exclusion of Cuban youth stands in stark contrast to a new class of Cubans who have benefitted from the opening of private business. Through the accumulation of hard currency, they become the new consumers of Cuban culture.

As both public and private EDM venues raise their event costs, a young person’s access to concerts and nightlife depends on the amount of hard currency they are able to dedicate to their leisure time. For Cuban youth, Friday nights in Havana now demand a series of economic decisions as the number of affordable nightlife spaces become few and far between. Youth may chase “trendy” scenes, but they are never able to forget about the number of pesos they have left in their pockets.

In March 2017, Cubanet reported that young men in Havana were getting tattoos of the SARAO logo, a private nightlife promoter, to avoid having to pay the cover at their popular EDM parties. Yoandry, one of over 500 “SARAO Boys” with the 5 CUC tattoo, explains, “Michel, the party organizer, said that all those that get a tattoo of the logo would be able to enter SARAO events for free before 11pm...you know that [here] no one ever has a peso in their pocket” (Ernesto Carralero Burgos, “‘Chicos Sarao,’ El Mercadeo de La Piel,” Cubanet Noticias, March 20, 2017). What first seemed like an empty rumor ultimately demonstrates the lengths ordinary Cuban youth will go to resist the increasingly exclusionary nature of Havana’s leisure geography.

On March 6, 2016, foreign DJs Diplo and Major Lazer performed to a lively crowd of young Cubans along the Malecón. Iliam Suárez, a female producer who opened the event, stated, “Major Lazer was the first concert with a lot of people, 400,000 people at the Tribuna Antiimperialista. It was proof that electronic music no matter which type, EDM or not, moves people in Cuba.” Facing the largest electronic music concert on the island to date, the Cuban EDM community felt validated by the size of the audience, given that the genre struggles to find its place in the island’s music scenes. But the relative popularity of EDM did not rise after the concert. Instead, the event’s high attendance served as a reminder of Cuba’s history of providing accessible, public spaces for culture and recreation to its people.

Ultimately, electronic music is excluded from the cultural canon as dictated by the state, the general listening public (who take the genre as background club music), and the areas where these two blur. In Havana, electronic music holds greatest significance to small, underground communities of marginalized youth like the gay community in the Special Period, Afro-Cuban men who practice artistic innovation in blending Afro-folkloric rhythms and electro-beats, and independent producers who find a personal escape in sitting behind their laptops and experimenting with new computer-generated dubstep tracks. Through this quest to achieve viability as artists, young DJs and producers are transforming Cuba’s vibrant new field of cultural engagement, one electrónica party at a time. ​