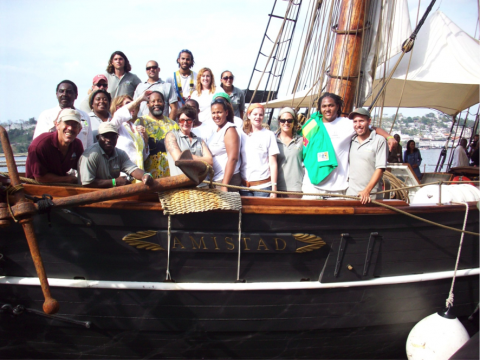 From March 22 to March 31, 2010, a replica of the Amistad ship, originating in the United States, visited Havana. The Amistad was formerly a vehicle of the slave trade and in 1839, it became a symbol of rebellion for the Africans brought forcibly to the island as slaves.

That moment, in which fifty-three African slaves from Sierra Leone rose up as the Amistad sailed near Sagua la Grande en route from Havana to Puerto Príncipe (currently Nuevitas), is brought to life in a new project. Its essential objective is to revisit the tragic history of the slave trade and offer a permanent tribute to its victims.

In the Amistad revolt the slaves rebelled and reclaimed history, demanding that the surviving crewmembers return them to Africa in that very boat. Nonetheless, the crewmen ultimately made their way to the coast of North America and it was only after a long and disputed judicial process that some of the protagonists were able to return to their country of origin.

The Amistad made news in the nineteenth century. On one hand, the fact that the slaves had used the same patterns of violence aboard the boat shocked colonial authorities. But the event also generated a three-year diplomatic conflict over Spanish claims that the United States return “its slaves.” Similarly, in some U.S. cities where slavery was still legal, people clamored to take over the valuable “cargo in dispute,” when in reality those slaves were the victims of illegal trafficking and therefore should have been freed.

For more than ten years now, the traveling project replicating the Amistad schooner has facilitated encounters with rebellion and diasporic memory in the countries it visits. For Havana, a city with a vital link to the Amistad’s history, this first visit was an opportunity to exchange experiences, confront opinions about the sensitive topic of slavery, and create a bridge of encounter between the two countries.

The Amistad’s arrival was a fitting occasion to visit one of the country’s most important institutions for the preservation of historical memory: the Cuban National Archive, where the first original archival references to the uprising on the ship can be found.

Thus, on March 29 and 30, part of the delegation visited the National Archive. On the first day, these visits were led by the researcher, producer, and filmmaker Katrina Brown, and James De Wolf, a specialist in transatlantic commerce, both descendants of the DeWolf family, who by their own account was one of the most important slave traders in the U.S. Quenten Snedker, coordinator and executor of the Amistad replica’s construction, led the second day’s activities, along with Cassandra Sleeper and Rueben Pacheco, the boat’s crewman.

The distinguished visitors were received by the director of the National Archive, Martha Marina Ferriol, and they spent time with the team of researchers dedicated to the study of Cuba’s African diaspora, composed of Doreya Gómez Veliz, Loreto Raúl Ramos Cárdenas, Iván Vázquez Maya, and Bárbara Danzie León, the author of this piece. The meeting took place in a cordial and friendly academic environment. The visitors also had the opportunity to consult primary sources related to the event to which they have given life.

During their pleasant conversation with the National Archive’s researchers, Katrina Browne and DeWolf made reference to their documentary Traces of the Trade: A Story from the Deep North (2008), which, grounded in their in-depth research, tells the story of the family to which they are heirs. DeWolf, the patriarch of a slave trafficking dynasty and U.S. senator, left an important moral and economic inheritance to his descendants for which they feel deep shame, given that it came from the deplorable business to which DeWolf was devoted.

The contemporary Amistad ship, whose name holds important symbolic meaning given the aims behind it, carries a legendary history shared between Africa, Europe, continental America, and Cuba. This history brings us closer together and unites us in the effort to remember the victims of the holocaust of slavery, and to fight against anti-black racism, which still persists as one of the worst consequences of slavery. Thus, their visit to the island was a significant act of profound historic value: a direct antecedent of the advances that we witness today in terms of exchange, and an event worth remembering in this archive.

Photo 1: In the replica of the Amistad, James Early, Director of Cultural Studies and Communication at the Center for Folklife Programs and Cultural Studies at the Smithsonian Institution, together with members of the delegation.

|
An earlier version of this piece was published in March 2010 [www.arnac.cu].