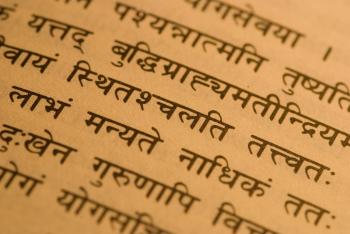 Prof. Fitzgerald (DGS for Sanskrit) retired at the end of  the Fall 2018 semester - as such, no graduate students will be admitted for Sanskrit until his successor has been appointed.

As part of the Classics Ph.D. program, the Classics Department at Brown offers a Ph.D. track in Sanskrit Language and Literature and a Classics and Sanskrit Ph.D. track as options that allows interested classicists to add a Sanskrit component to their Ph.D. The Sanskrit program is focused entirely upon the Sanskrit language and its literatures, but its fundamental philosophy and approach to scholarship is the same as that of the program in Greek and Roman classics. Texts are examined and interpreted within their broad cultural and historical context on the basis of a rigorous preparation in the study of the Sanskrit language.

Brown University has engaged in the study and teaching of Sanskrit for over a century and was recently under the leadership of the Purandara Das Professor of Sanskrit in Classics, James L. Fitzgerald, a scholar of ancient Indian religions, literatures, and philosophies. He was joined by Lecturer David Buchta, a scholar of Sanskrit literature, Indian philosophy, and the Pāṇinian tradition of grammatical analysis.

As with Classics students studying Greek or Roman civilization, knowledge of the underlying language(s) is the necessary prerequisite for reliable expertise in the study of anything to do with ancient India. Students are required to demonstrate a thorough and exact knowledge of Sanskrit and facility at reading both standard classical texts and those texts directly pertinent to their field of study. Incoming graduate students are expected to have a good knowledge of Sanskrit grammar and some reading experience prior to arriving at Brown.

The student must acquire a minimum of 18 graduate credits during the three years of coursework. These courses will include Sanskrit 1020 (Religious Literature), 1080 (Mahābhārata), 1100 (Vedic Sanskrit), 1400 (Pāṇini), 1600 (belles lettres, kāvya), and 1800 (Classical Philosophy, darśanas), which courses will provide them first hand experience with major texts of each of those areas of Sanskrit literature and introduce them to the fundamental secondary scholarship in each of those areas. Students will also take the basic proseminar (Sanskrit 2000) and at least three research seminars. The balance of coursework will consist of courses relevant to a student’s research interests that are offered in other departments and programs at Brown (e.g., Religious Studies, Comparative Literature, Classics courses in Latin or Greek Literature, History, English Literature, Ancient Studies, Historical Linguistics, Art History, etc.) and individualized reading courses in a student’s special area of Sanskrit. Normally, four courses are taken each semester in the first year, and then declining numbers in later semesters as the student is additionally managing teaching and service duties. Students entering the program will take a diagnostic placement test in Sanskrit at the outset of their graduate career at Brown. Some students may be required to take Sanskrit 0300 and 0400 during their first year, if the diagnostic test indicates that to be advisable. These courses are not eligible for graduate credit.

Having passed the reading exam in French or German at the beginning of the first year of study, the student should demonstrate adequate reading competence in the other of those two languages no later than the end of his or her third semester of residence. This demonstration may be accomplished by passing an exam administered by a faculty member or by receiving an honors grade in German 12 ('German for Reading') or in a similar course in French, if offered.

Students in Sanskrit will benefit from studying Hindi at some stage of their graduate career and are encouraged to do so, if possible; Hindi is an important scholarly language for some fields of research and will allow the scholar to make better contact with traditional Indian scholars when conducting research in India. If the study of other South Asian languages is necessary or advisable for a student's program, it may be possible to arrange for coursework or examination in conjunction with other institutions, summer institutes, etc.

Students must pass the General Sanskrit Reading Exam no later than May of their third year of residence in the program. They must pass their Special Sanskrit Reading Exam no later than December in their seventh semester of residence. Each exam is a four-hour exam consisting of two two-hour segments. In each exam, one segment will require the student to translate a set of passages at sight and another segment will require the translation of a set of passages with the consultation of a dictionary allowed. These exams will be administered twice a year as needed, once in December and again in May. Students should take the general exam every semester of residence until they pass it and they should work out a program of work for their special exam with the Professor of Sanskrit at the conclusion of their first year of residence.

These consist of two four-hour written examinations, one in the student’s major field and another in a secondary field. The focus, scope, and reading lists for these examinations will be worked out on an individual basis, in view of the research agendas of each student. The major field exam should be passed no later than the end of the sixth semester of residence and should serve as a platform for the formulation of the dissertation prospectus. The student should pass the secondary field exam no later than the eighth semester of residence.

It is an integral part of graduate training and professional preparation in Classics to gain teaching experience. Two semesters of teaching are therefore required of all graduate students. Teaching opportunities within the department vary; often, assignments progress from TA (teaching assistant) duties of working with a professor, grading and facilitating discussion sections, to TF (teaching fellow; a higher stipend obtains) positions where the graduate student teaches a semester-long language course (usually introductory or second-year level) on his or her own.

Once the prospectus has been approved, the candidate proceeds to dissertation work in consultation with his or her advisor and two additional readers, one of which will ordinarily be a Sanskritist from another institution. The dissertation shall be a substantial and original investigation of a significant scholarly question or problem. A formal defense of the thesis is required by the university, and candidates will (save in unusual circumstances) defend their work before members of the Department of Classics and other interested faculty.